Trawling Effects on Sponges in Alaska

Over 200 sponge species are known to occur in Alaskan waters and more species are likely to be discovered as exploration continues. 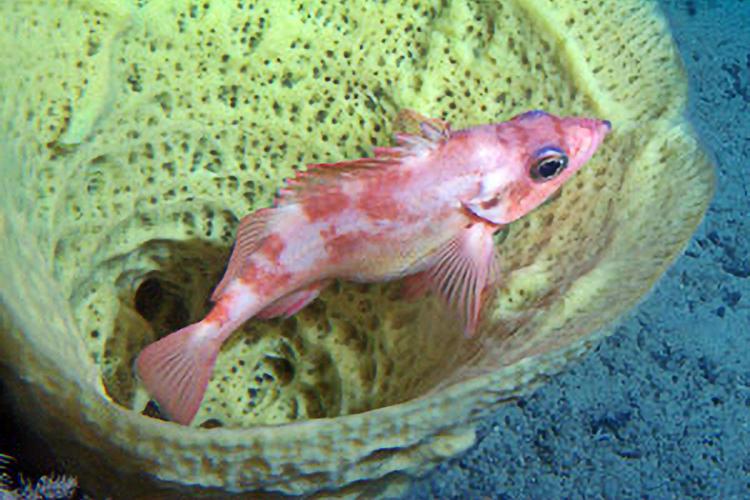 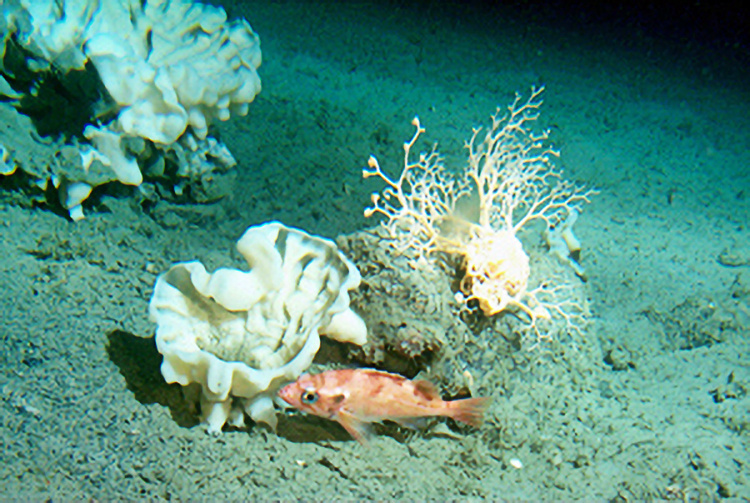 A rockfish nestles against the sponge Aphrocallistes vastus.

Sponges from the Classes Calcarea, Hexactinellida and Demospongiae are broadly distributed on the continental shelf and slope throughout the Gulf of Alaska, Bering Sea, and along the Aleutian Islands in depths from the intertidal to at least 2800 m. These sponges have varying morphologies including encrusting, vase-like, tubular, barrel-shaped, and plate-like. Individually and collectively these organisms form high-relief complex habitat that is thought to foster increased biological diversity and productivity by providing cover and food aggregations for juvenile and adult fish, especially rockfish

Scientists have observed the effects of bottom trawling on large erect sponges in the Gulf of Alaska over multiple time scales. Immediate, short-term (1 year), and long-term (13 years) observations were completed on the continental shelf off Salisbury Sound, Baranof Island. Immediate trawl effects included the direct removal of sponges as well as an increased incidence of sponge displacement and tissue damage in trawled versus untrawled reference areas. After one year, incidence of damaged sponges decreased in trawled areas compared to the immediate observations but was still significantly higher than in reference areas. Thirteen years after trawling, the incidence of damage within trawled areas was further reduced compared to the earlier observations but was still higher than in reference areas. Density of large sponges was also lower in trawled areas compared to reference areas. Our preliminary results indicate that although sponges may be resilient to some disturbances, trawl damage can be persistent and may result in changes to the benthic community.

A substantial amount of seafloor has been mapped in Alaska by various sources using modern multibeam sonar technology (~425,000 km²). Part of this mapping was completed under the auspices of the Alaska Fisheries Science Center, generating high-resolution bathymetry with backscatter data.

This data may be used in concert to generate habitat maps of the ocean floor, as shown in the above example. Backscatter, or the strength of the sound pulse, is used to classify the substrate (i.e., dark shades = steep slopes or hard boulders), while bathymetry may delineate the feature extent. Most of the mapping in the Gulf of Alaska is in the form of “postage stamps” ranging in size from 27 km² to 790 km². Some of this mapping was in cooperation with the Alaska Department of Fish and Game and the University of Alaska Fairbanks. Mapped sites in the GOA were generally selected in the areas of fisheries for rockfish (Sebastes spp.). In contrast, for the Aleutian Islands, a systematic design was used to select sites to map, enabling a larger area of seafloor to be characterized. In theory, such a systematic design allows extrapolation to unmapped areas 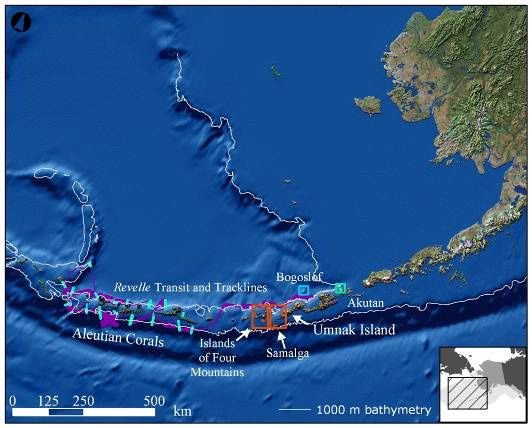 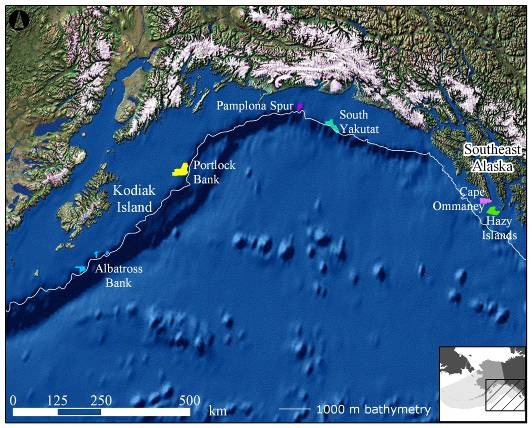