5 Facts About How Belugas Use Sound

Research results on the mysteries of beluga whale communication. 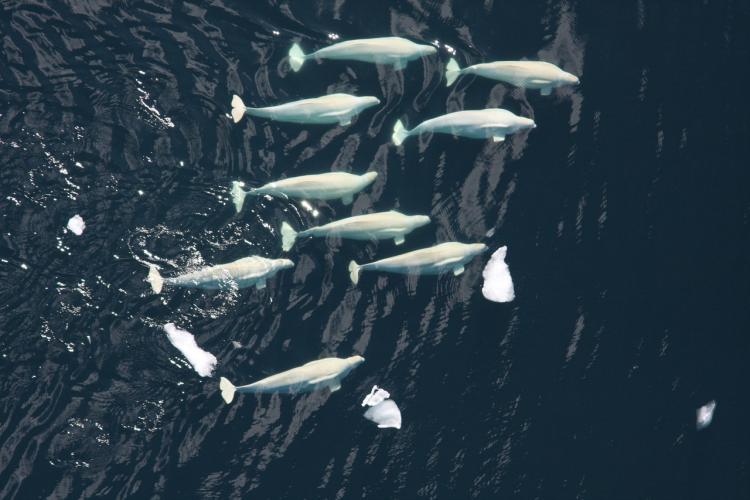 Beluga whales swim together in their typical echelon formation.

Beluga whales are very social marine mammals of our arctic seas, and we’ve only recently begun to understand how they communicate with each other. It turns out that they have quite a bit to say!

Beluga whales use sound to “see” underwater using a process called “echolocation” similar to bats and some cave birds. This allows them to hunt, avoid obstacles, and find each other. While hunting, these echolocation clicks bounce back off of their prey and provide an audible “view” of their target. While researching beluga populations, scientists listen and use echolocation signals to identify feeding areas within their habitats.

3. Beluga Whales Use Sound To Talk To Each Other

Beluga whales use sound to talk to each other while moving about. While we have distinguished three categories of sounds encompassing their many types of vocalizations, we’re still far from understanding the breadth of their communication skills.

4. Beluga Whales Alert Each Other Of Predators

It is believed that beluga whales communicate to each other when a predator, such as a killer whale (orca), is nearby. It is still unclear how belugas communicate this information, though observers and acoustic monitoring continue to search for an answer to this question.

5. Where We Record Belugas, There Are Belugas

Researchers are using passive monitoring of beluga whale vocalizations to better understand where a small, endangered population of belugas are in Cook Inlet throughout the year. These acoustic studies will help researchers determine which critical habitat areas require better protections from noise pollution and other potential threats. They also help managers strike the ever-difficult balance with human recreational and commercial uses near Anchorage, Alaska.