A Brief History of Age Determination of Walleye Pollock

Fig. 1:  Whole otolith ageable from the surface.  Annular marks, labeled with dots, are clearly visible in this otolith determined to be from a 3-year-old fish.

Like most other groundfish species, walleye pollock are aged by counting annual growth rings that occur on otoliths (ear bones), much like growth rings occurring on trees. However, there is a difference between tree and otolith rings in that otolith rings are generally not nearly so clear as tree rings, and are therefore difficult to interpret. Actually otoliths are not true cellular bone, but are calcium carbonate stones made out of aragonite.  These stones continue to grow through the life of a fish, and usually lay down an annulus (year mark) once per year. One of the most difficult aspects of ageing is determining just when the final year mark was laid down. 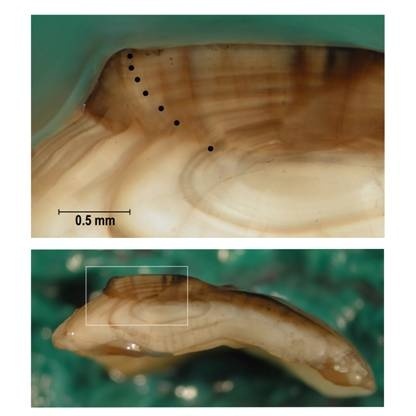 Fig. 2: Otolith cross-section made by breaking an otolith in half in the transverse direction, and burning the resulting surface in an alcohol flame. Annular marks, labeled with dots, indicate this otolith was taken from a 7-year-old fish.

The"sagittal" otolith, used for ageing, is the largest of three types of otoliths that are found in the head of teleost fish.  These "bones" are part of the vestibular apparatus of fish that function as an organ for balance and hearing. Growth marks that are used for ageing are typically visible on the whole untreated otolith (Fig. 1; fished aged 3yr). Young clear specimens can be aged from the surface. However, consistent ages from older specimens requires breaking the otolith transversely (i.e., in the narrow direction), and burning the resulting surface in an open alcohol flame (Fig. 2; fish aged 7yr).

Two of the earliest attempts to age walleye pollock were by Japanese and U.S. scientists using otoliths  (Ishida 1954, Mosher 1954). Mosher, then of the U.S. Fish and Wildlife Service broke the sagittal otolith along the transverse axis as was recommended to him by G. Rollefsen. This was a minor effort on a minor sampling of the virgin stock of pollock that then existed in the eastern Bering Sea. By the time J. LaLanne revisited the ageing of pollock (LaLanne 1975, 1979), the pollock fishery had built to 1.4 million metric tons and age determination of this species was becoming a serious matter. LaLanne found the whole otolith to be sufficiently clear for age determination. G. Hirschorn advanced age determination at the AFSC by bringing on the break and burn method around 1981, and introducing a quality control system based on comparing repeated readings from different age readers on the same otolith in 1983. The break and burn method (i.e., transversely breaking the otolith by hand and burning the transverse surface over and alcohol flame) was then being highly touted by Canadian age investigators (Chilton and Beamish, 1982) and proved to be immensely useful for the age determination of many Alaska groundfish species. To this day, the break and burn method is the preferred method for ageing walleye pollock at the AFSC. Only younger, clear specimens are aged from the surface. Also, only relatively minor changes in the ageing criteria of walleye pollock, such as the preferred axis for counting (changed around 1990), has occurred since 1981. 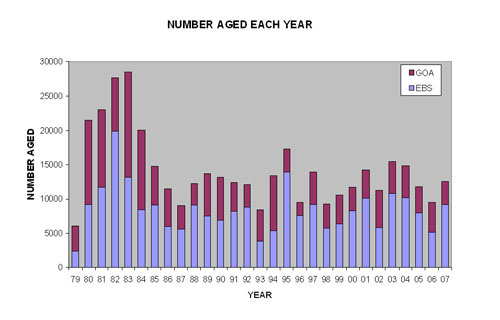 Fig. 3: Number of walleye pollock aged each year from 1979 to 2007. Earlier years were largely aged from otolith surfaces.

Several countries which have fished pollock in the international Donut Hole have attempted to arrive at ageing methodology through consensus. In September 1989, a "Workshop for Ageing Methodology of Walleye Pollock" was held in Gdynia, Poland (Kimura 1991). Prior to this workshop AFSC circulated an exchange sample of 125 broken and burned pollock otoliths, that was eventually aged by all nations participating in the workshop (Gdynia Report Table 1). In addition, Poland prepared 144 otolith sections which were aged by participants at the Gdynia Workshop (Gdynia Report Table 2). The results from these exchange samples caused the participating countries (Canada, Japan, P.R.C., Poland, U.S.) to agree "that under are present knowledge that the break and burn method provides the best method for ageing walleye pollock."

A second "Workshop for Ageing Methodology of Walleye Pollock" was held at the Alaska Fisheries Science Center in Seattle (Anon., 1998). Results from the reading of reference samples from the Western and Eastern Bering Sea at this workshop again indicated substantial agreement between Japanese, Polish, Russian and, and U.S. age readers.

In 1983 G. Hirschorn adopted a quality control system in an attempt to assure a consistent quality of ages at the AFSC by randomly subsampling 20% of otoliths for re-ageing by a second age reader. Under this system, differences in the ages from the two age readers are reconciled in attempt to arrive at the best ages possible. When major discrepancies between the two age readers are detected, large numbers of otoliths may be re-aged.

Over the years the AFSC and its precursors have aged large numbers of walleye pollock (Fig. 3). In the earlier years, pollock otoliths were clear and read from the surface, enabling age readers to age large numbers in a short time. Gradually, the otoliths became more difficult, more often requiring the more time consuming break and burn methodology.

Recently, pollock ageing criteria have been radiometrically validated (Kastelle and Kimura 2006) using Pb-210/Ra-226 methods. Also, pollock ageing criteria have been corroborated (Kimura et al. 2006) by tracking strong year classes, marginal increment analysis, and confirming otolith ages using vertebrae. Taken together these studies give us considerable confidence in the ageing methods we are using for this species.