* The information in this document has not been subjected to formal peer review. Please use footnotes and the following format when citing this document:

Flathead sole (Hippoglossoides elassodon) is a right-eyed flatfish commonly encountered in the eastern Bering Sea (EBS) and the Gulf of Alaska (GOA). Flathead sole is similar in appearance to a less common, closely related species, Bering flounder (H. robustus). Despite differences in biology and spatial distribution, H. elassodon and H. robustus are managed together as a two-species complex in the Bering Sea/Aleutian Islands (BSAI) assessment area where their ranges overlap (Stockhausen et al., 2008). 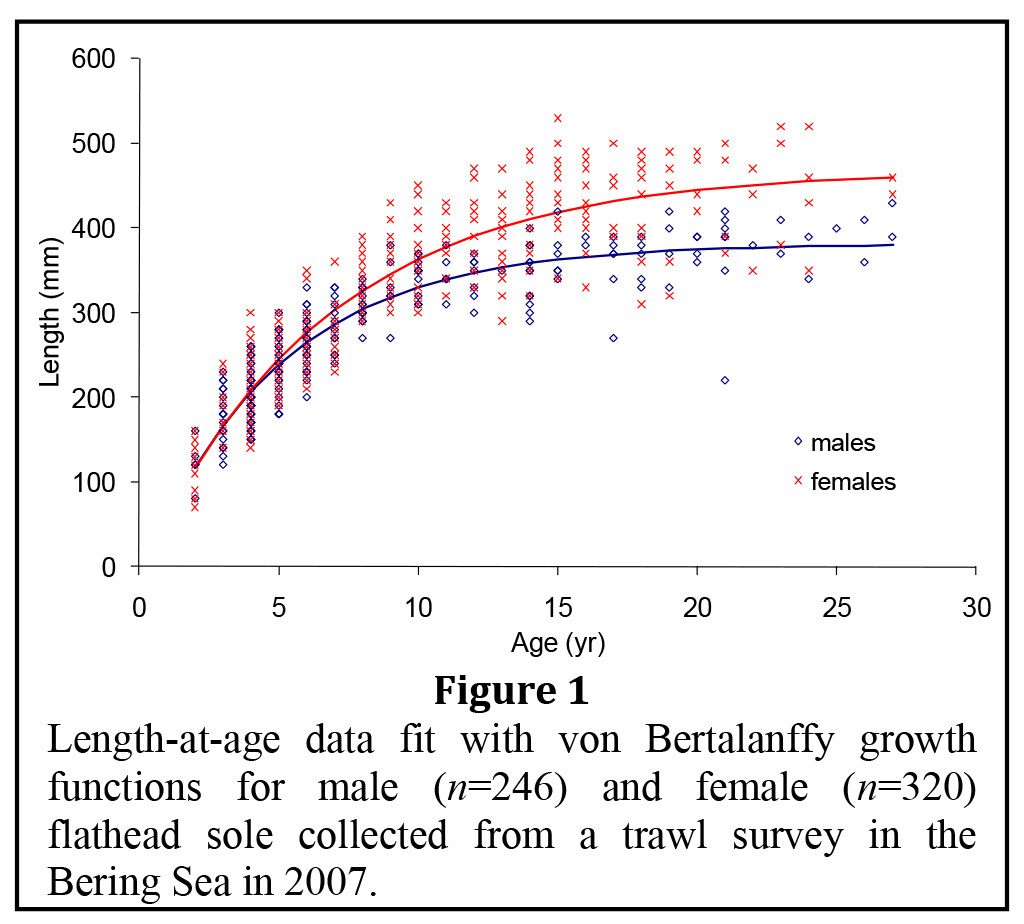 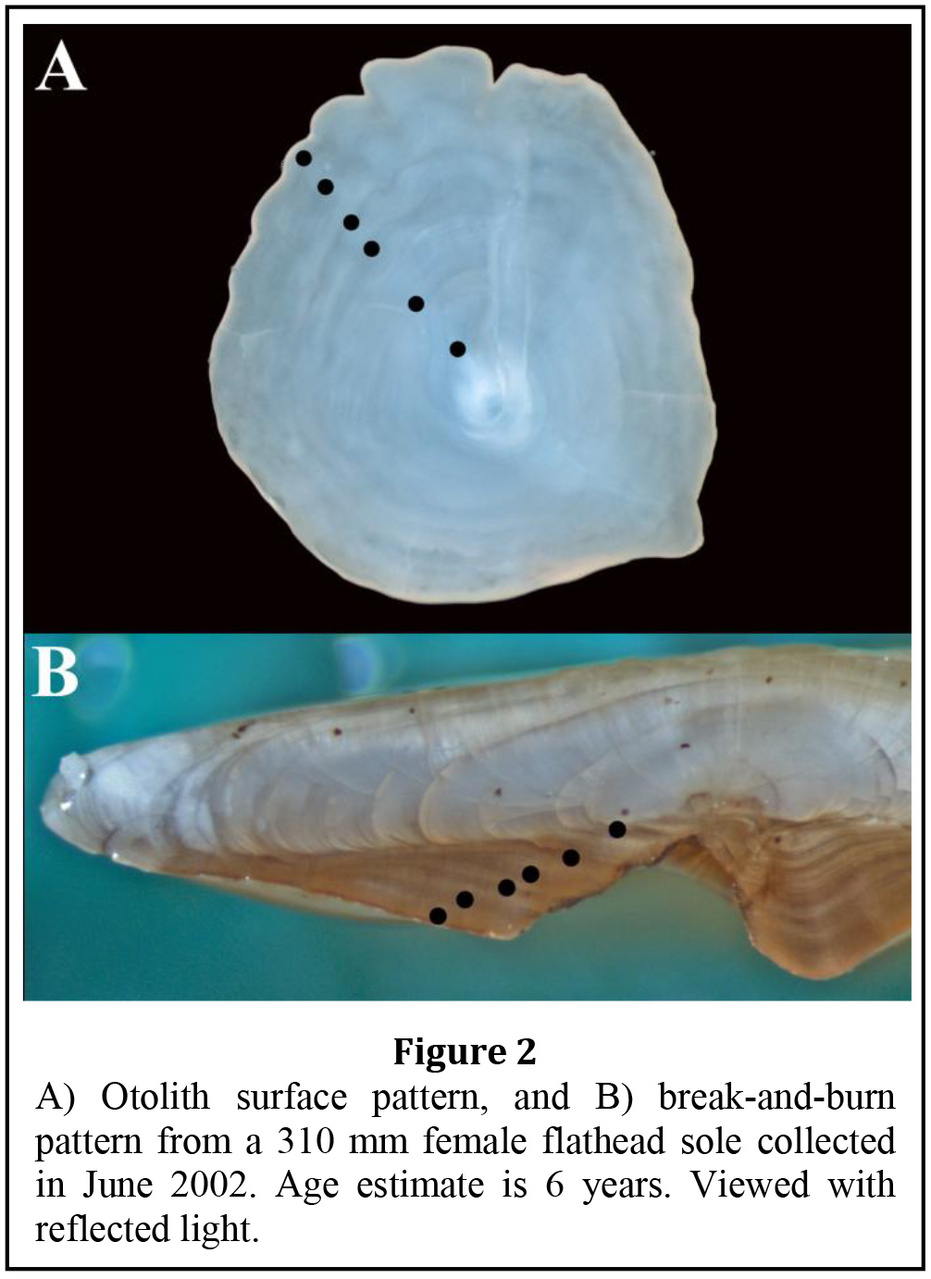 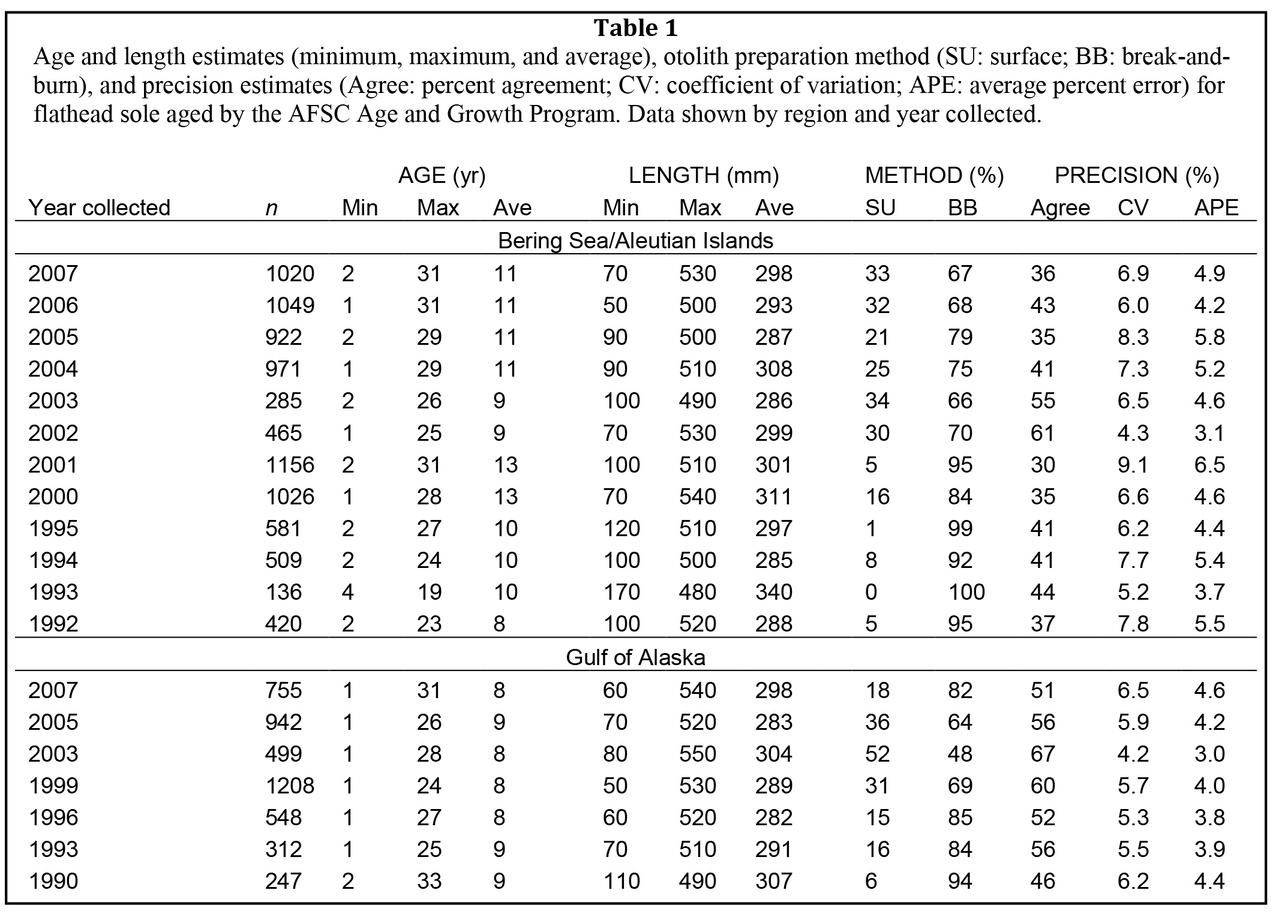 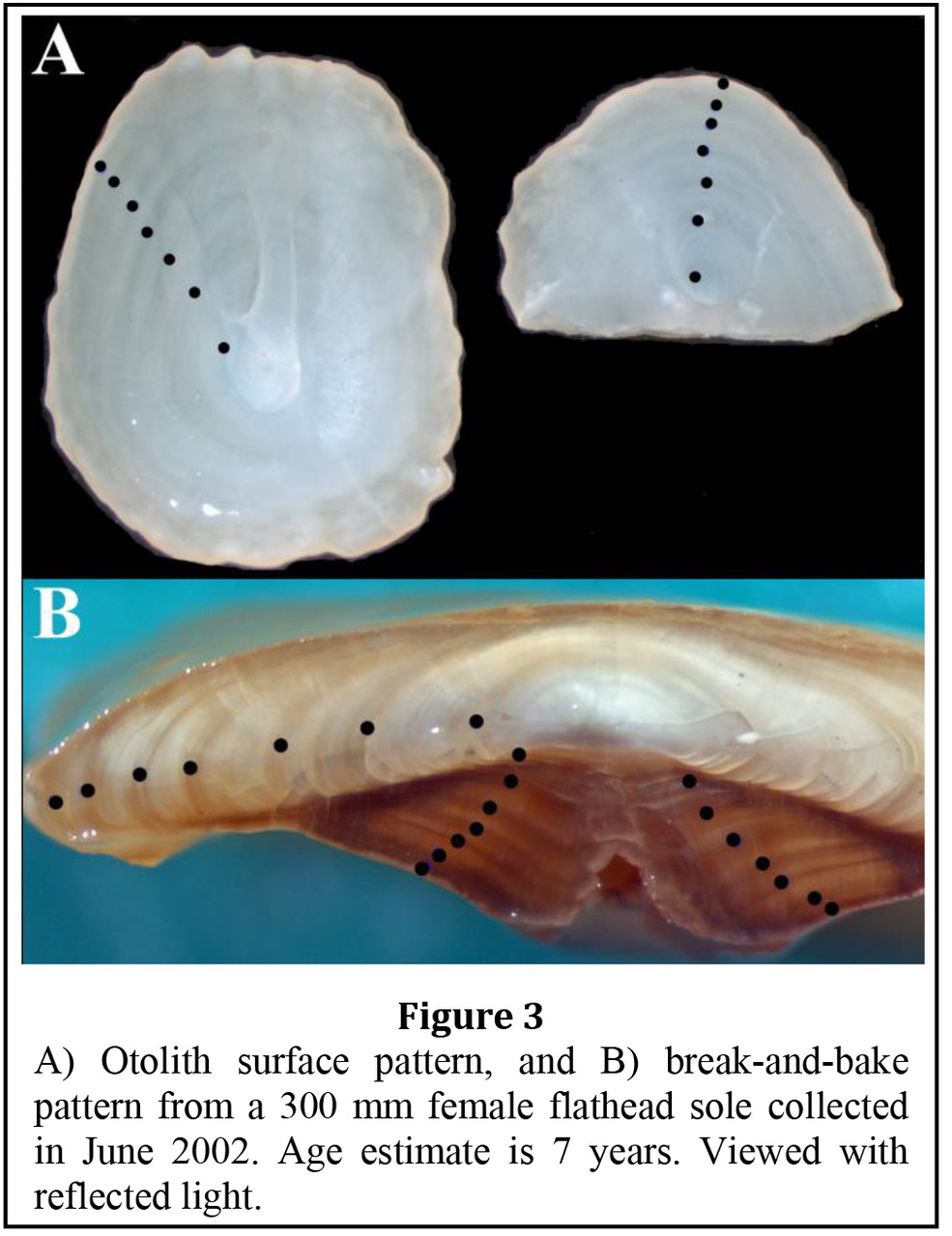 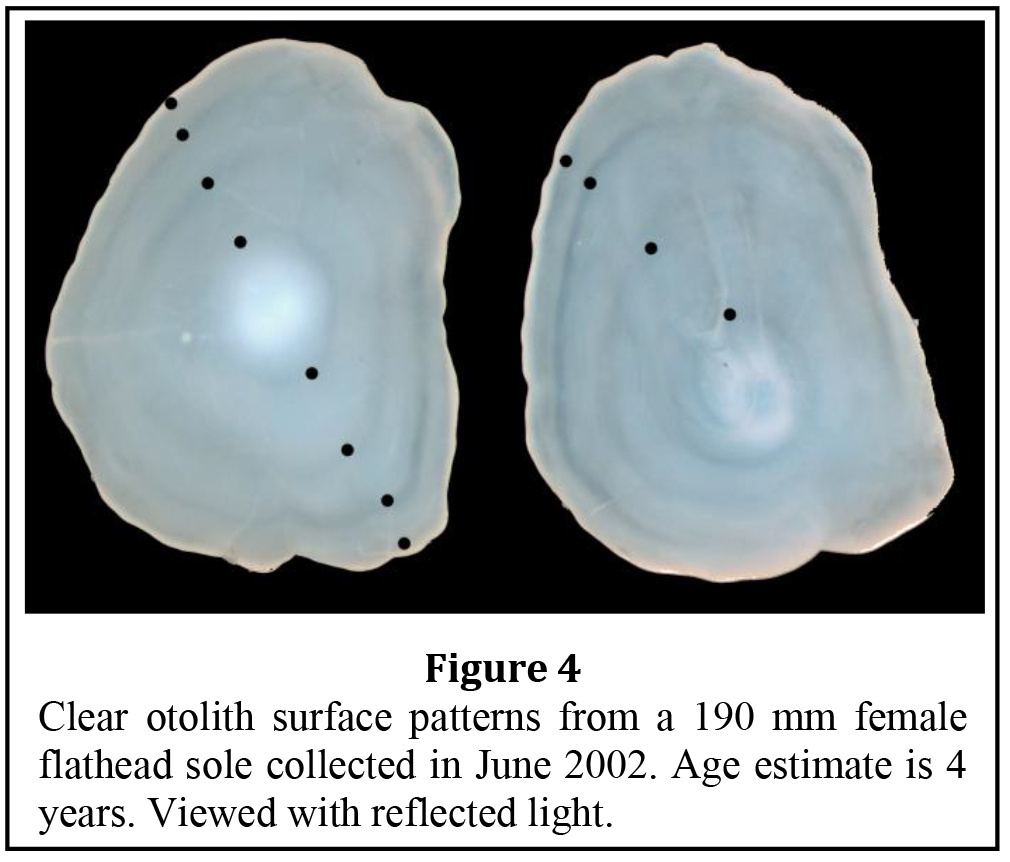 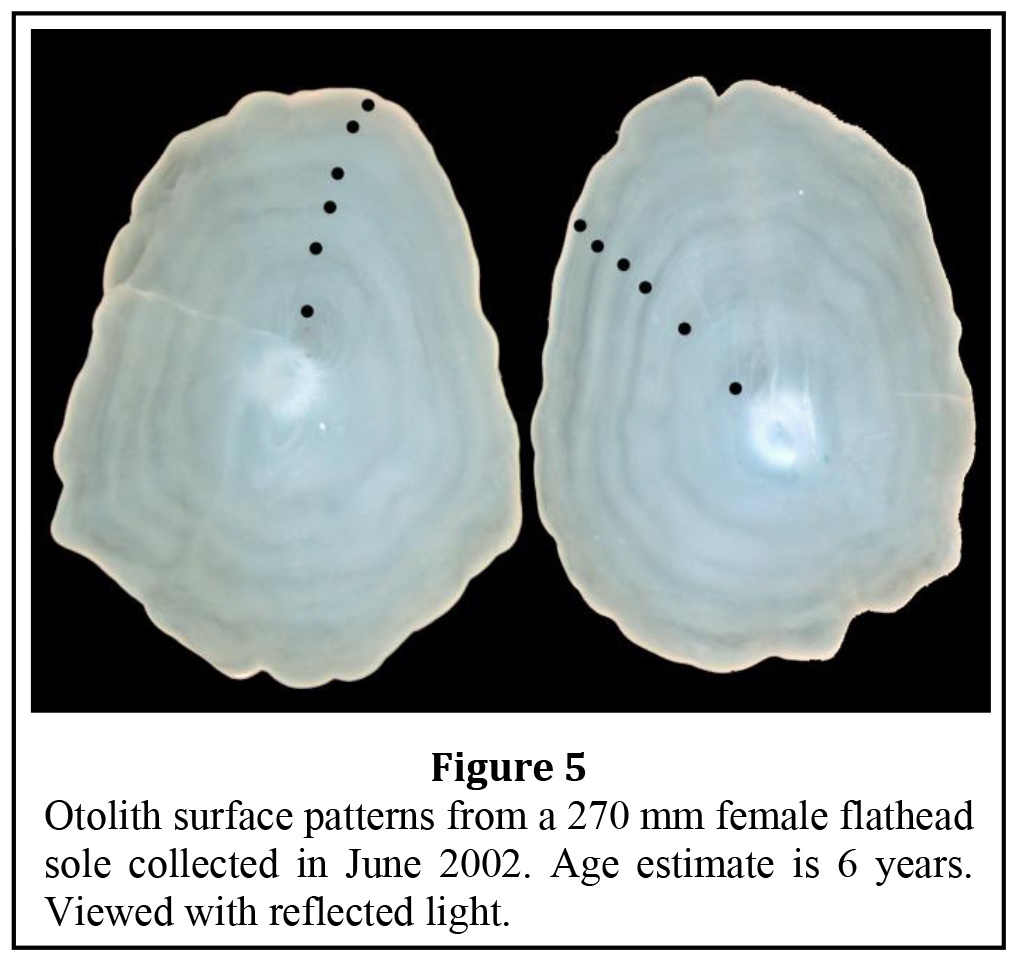 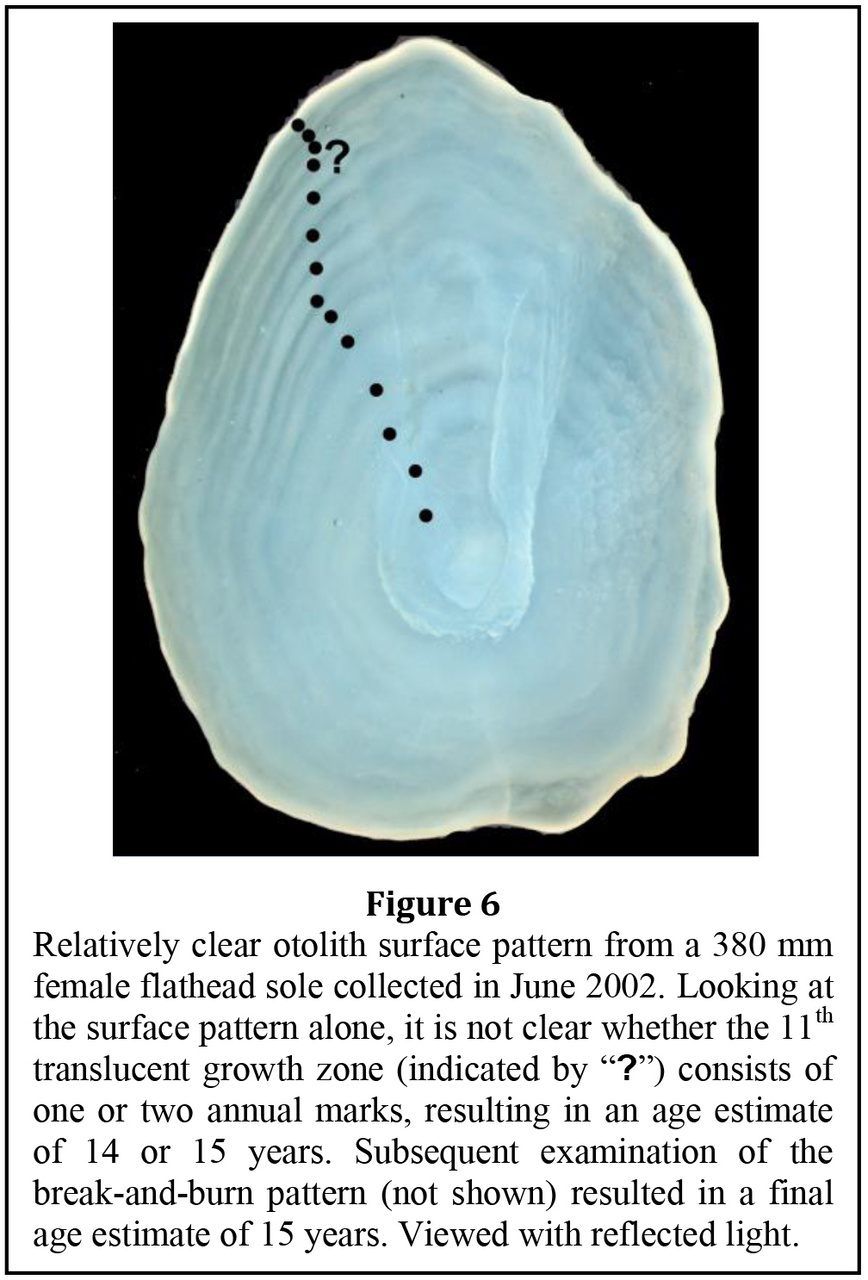 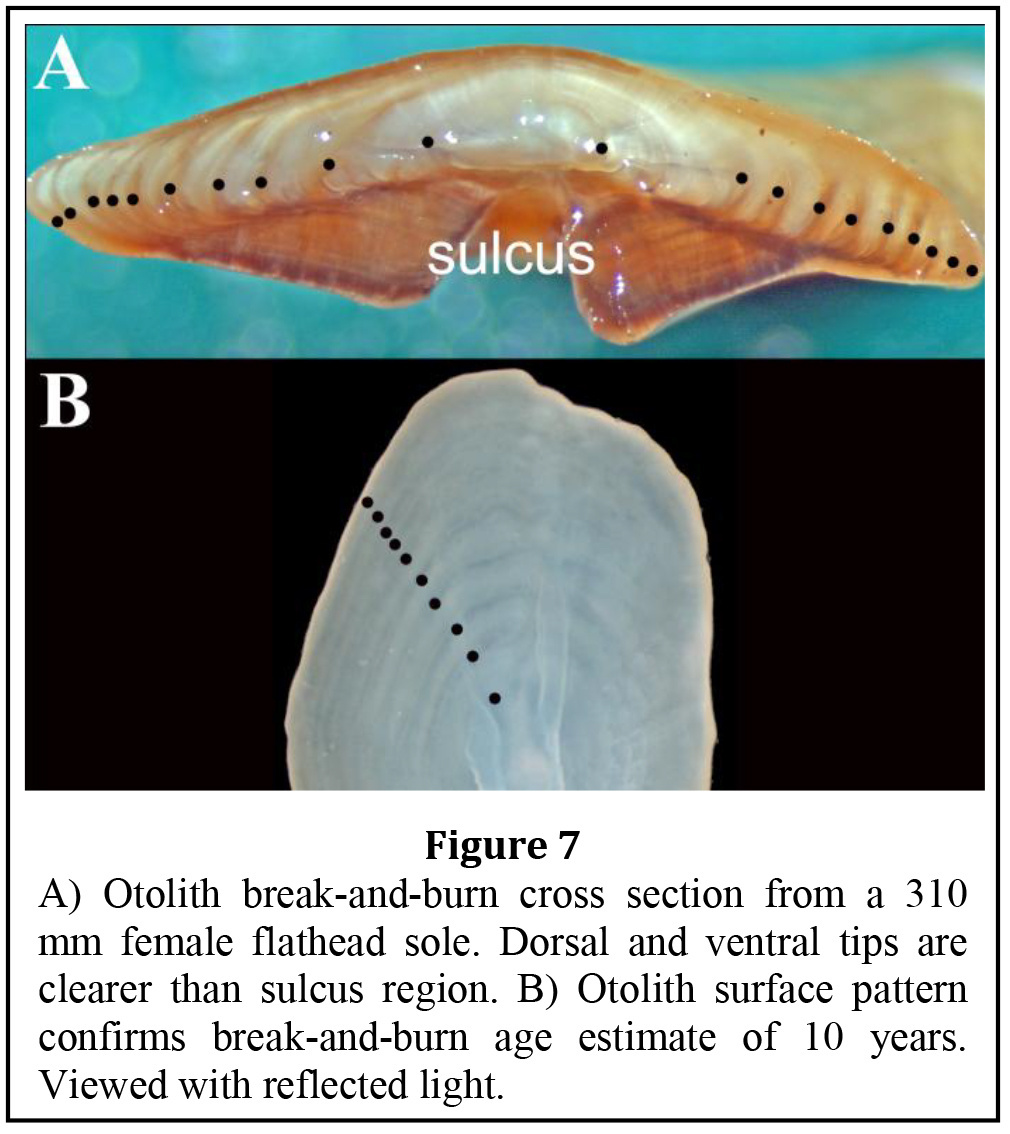 From 1985 to 2008, the Alaska Fisheries Science Center (AFSC) has collected and determined ages from over 13,000 flathead sole otoliths. Age estimates range from 0 (young-of-year) to 33 years (Table 1). Flathead sole age determination is fairly difficult, with an average inter-reader CV of 7 percent and percent agreement of approximately 42 percent (Table 1). 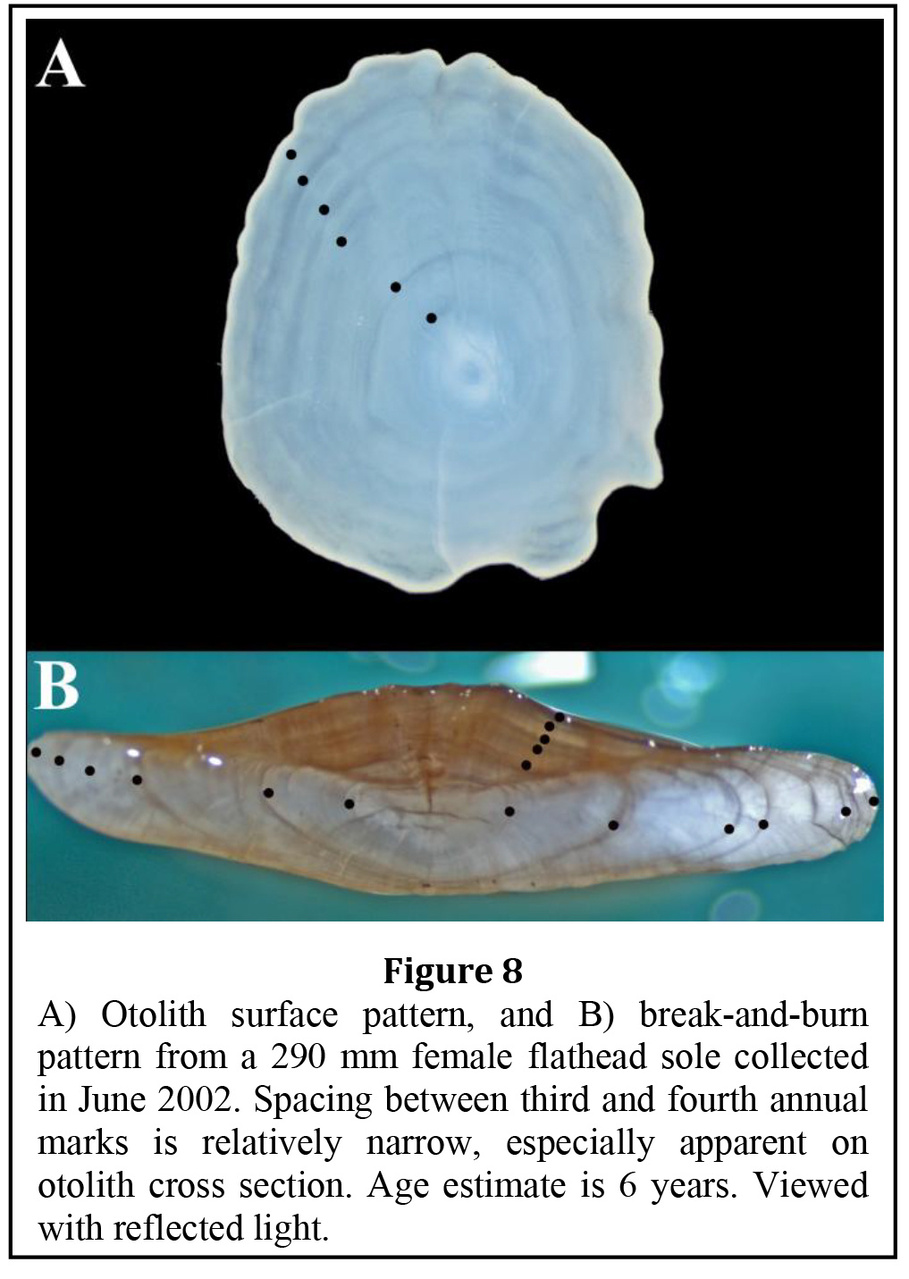 The surfaces of flathead sole otoliths tend to be cloudy, and therefore surface examination is the primary age determination method only for relatively young or clear otoliths. The break-and-burn technique was favored until the break-andbake method was introduced in 2003. Baking is now generally the preferred method for flathead sole otoliths because it usually produces more even contrast between translucent and opaque growth zones than burning. However, for some otoliths, the break-and-burn method may result in clearer growth patterns. It is up to the discretion of the age reader as to which method is chosen, although it is often helpful to periodically test both methods on either half of the same otolith. (Please see Goetz et al., 2012 for a more detailed description of standard AFSC otolith preparation methods.)

Flathead sole otoliths are relatively difficult to interpret, with growth patterns comparable to those of rex sole (Glyptocephalus zachirus). 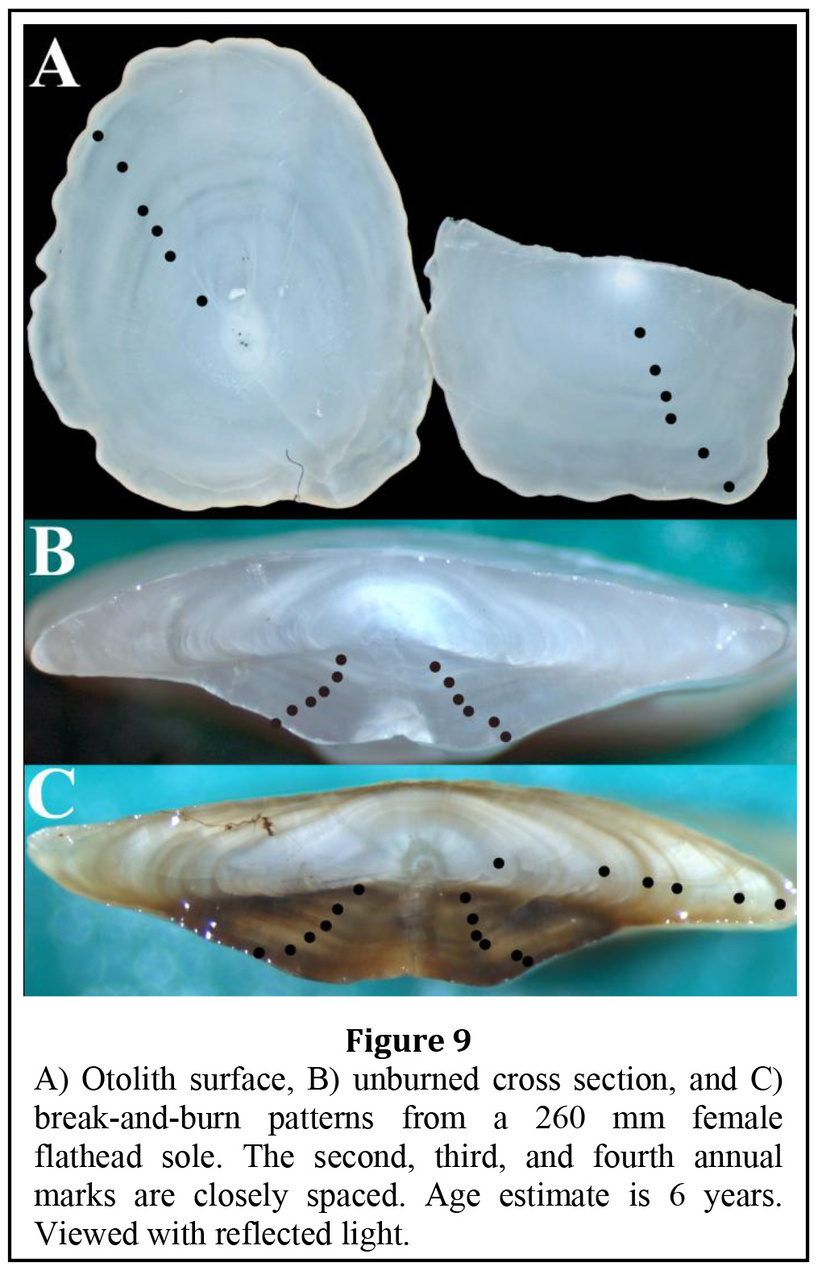 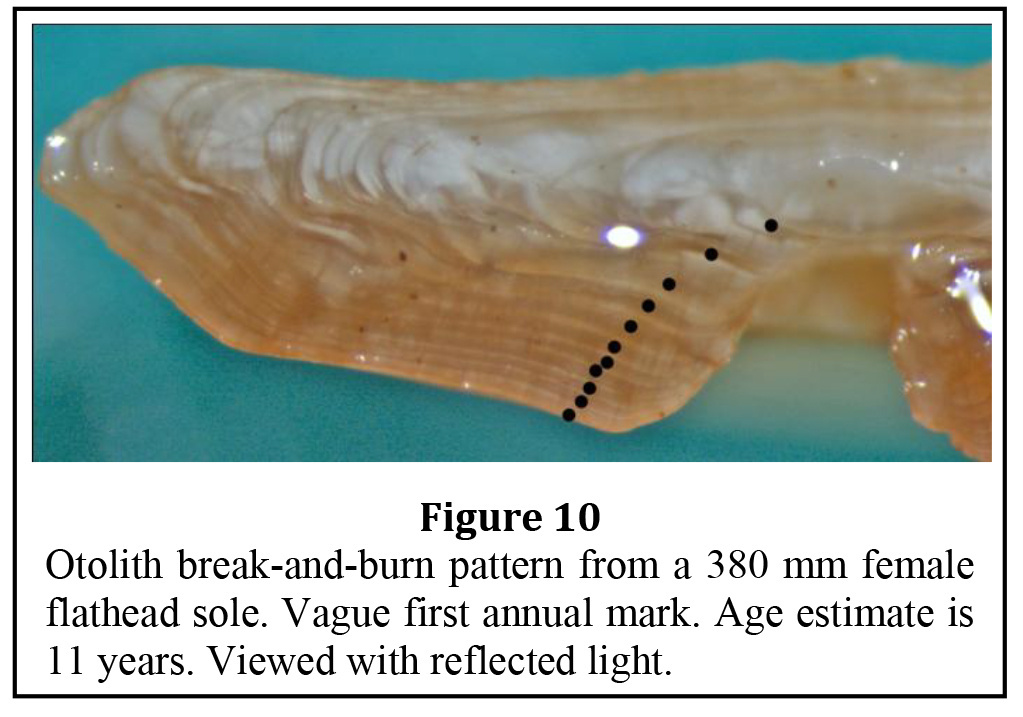 In flathead sole otolith cross sections, the areas on either side of the sulcus are generally the preferred reading axes. However, in some instances the dorsal and ventral tips may be clearer than the sulcus (Fig. 7). Whenever possible, the age reader should attempt to follow each translucent growth zone from the sulcus to either the dorsal or ventral tip. A translucent growth zone that can be followed around the circumference of an otolith is much less likely to be a check, especially if it is strong. 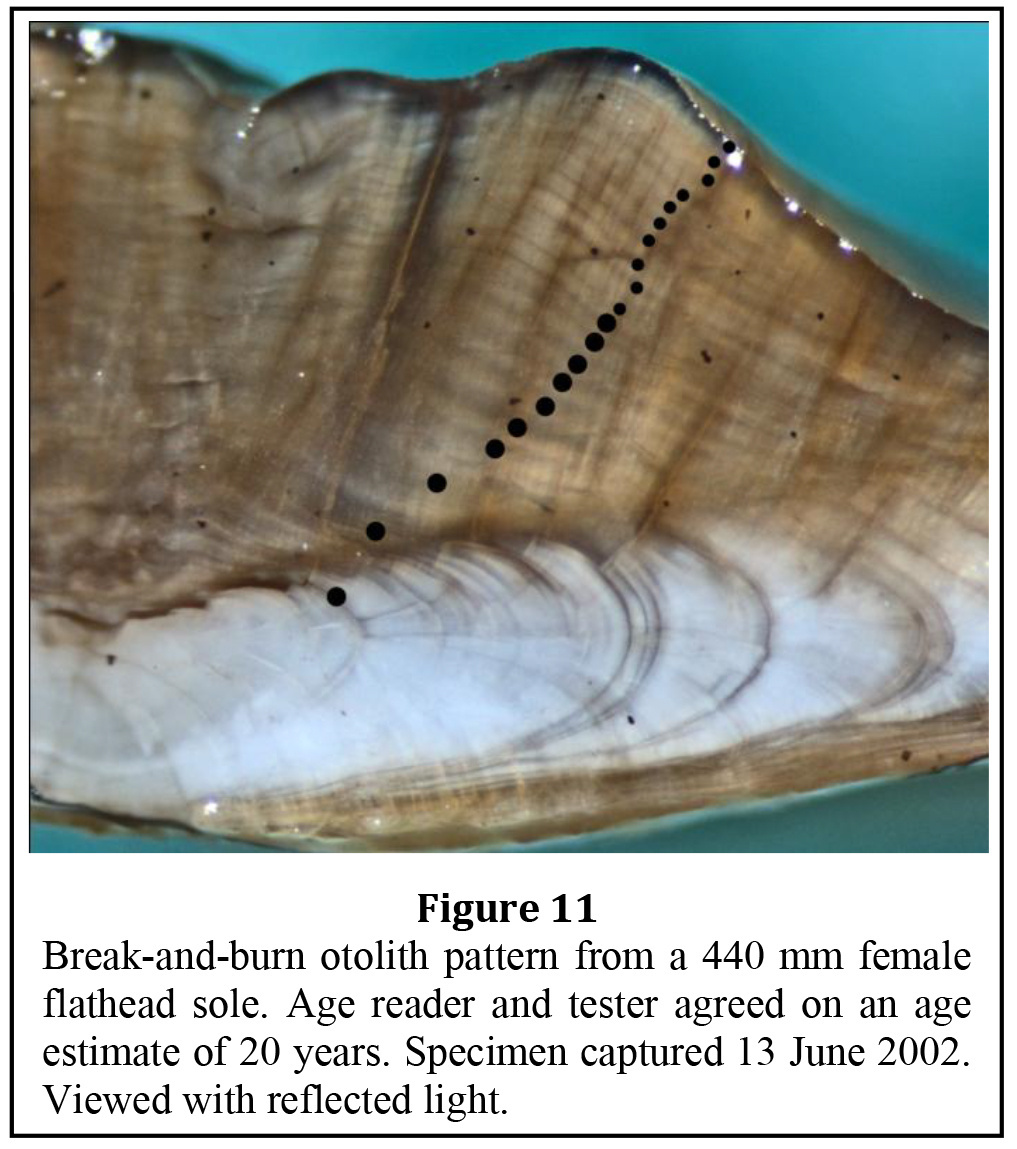 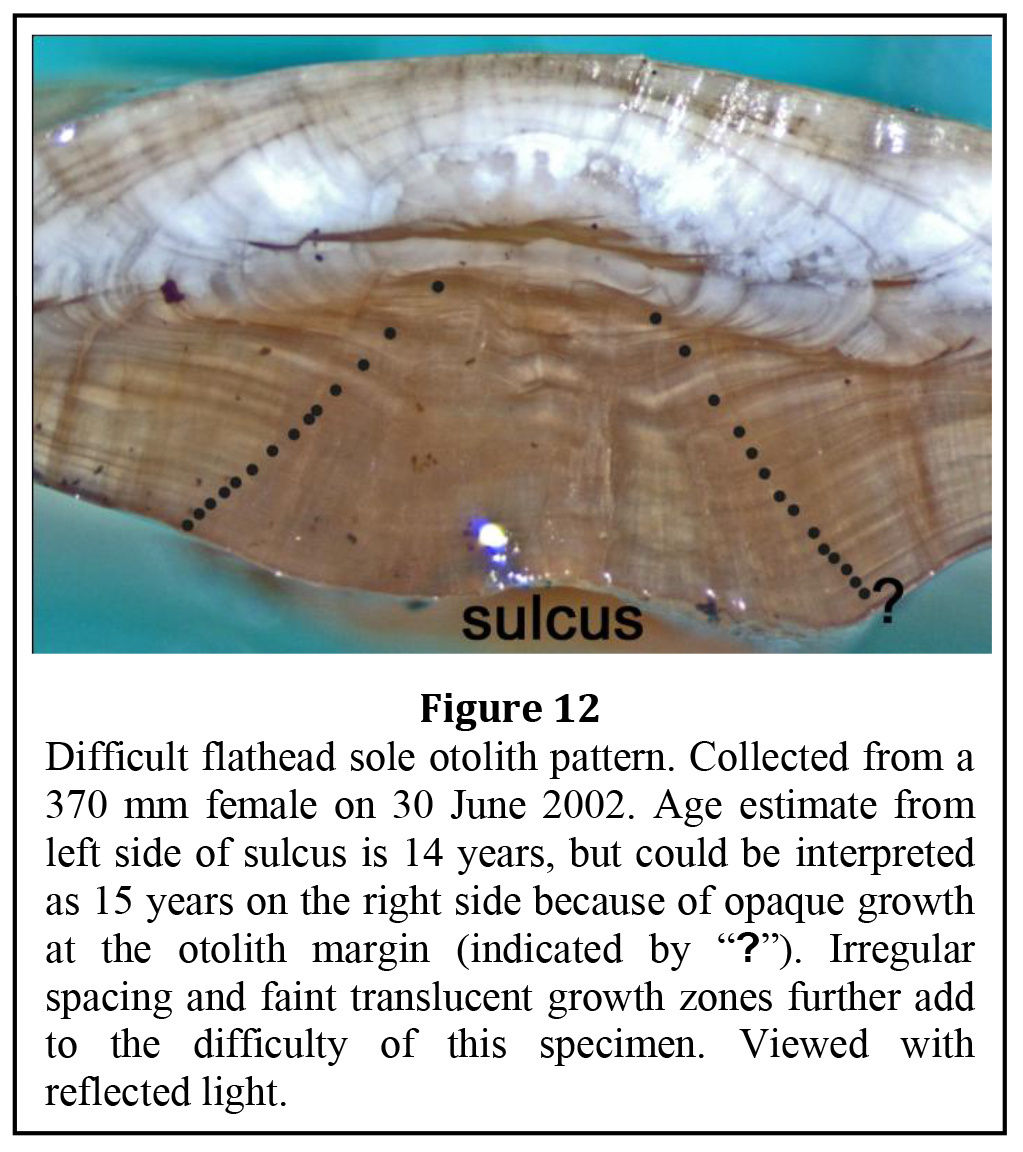 Occasionally, some opaque growth zones may be relatively wide or narrow compared to other opaque zones within the same otolith. In these cases, the comparison of surface and breakand-bake patterns is especially useful in distinguishing between checks and annual marks (Fig. 8). The unburned cross section may also be helpful for comparison, particularly in younger fish (Fig. 9).

Another problem typical of flathead sole age estimation is identification of the first annual mark (Fig. 10). Again, viewing the surface pattern in combination with the baked pattern is often necessary to arrive at a final age estimate. Additional examples of flathead sole otolith growth pattern interpretation are shown in Figures 11 through 14. 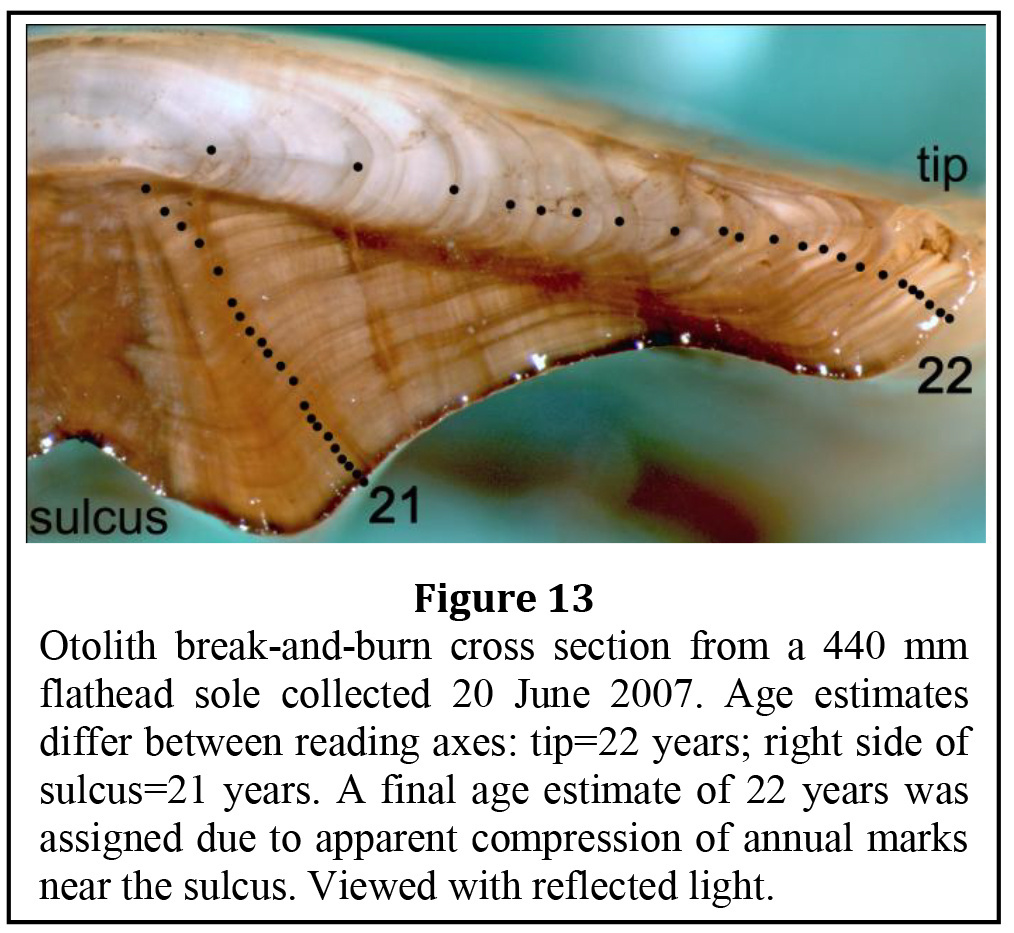 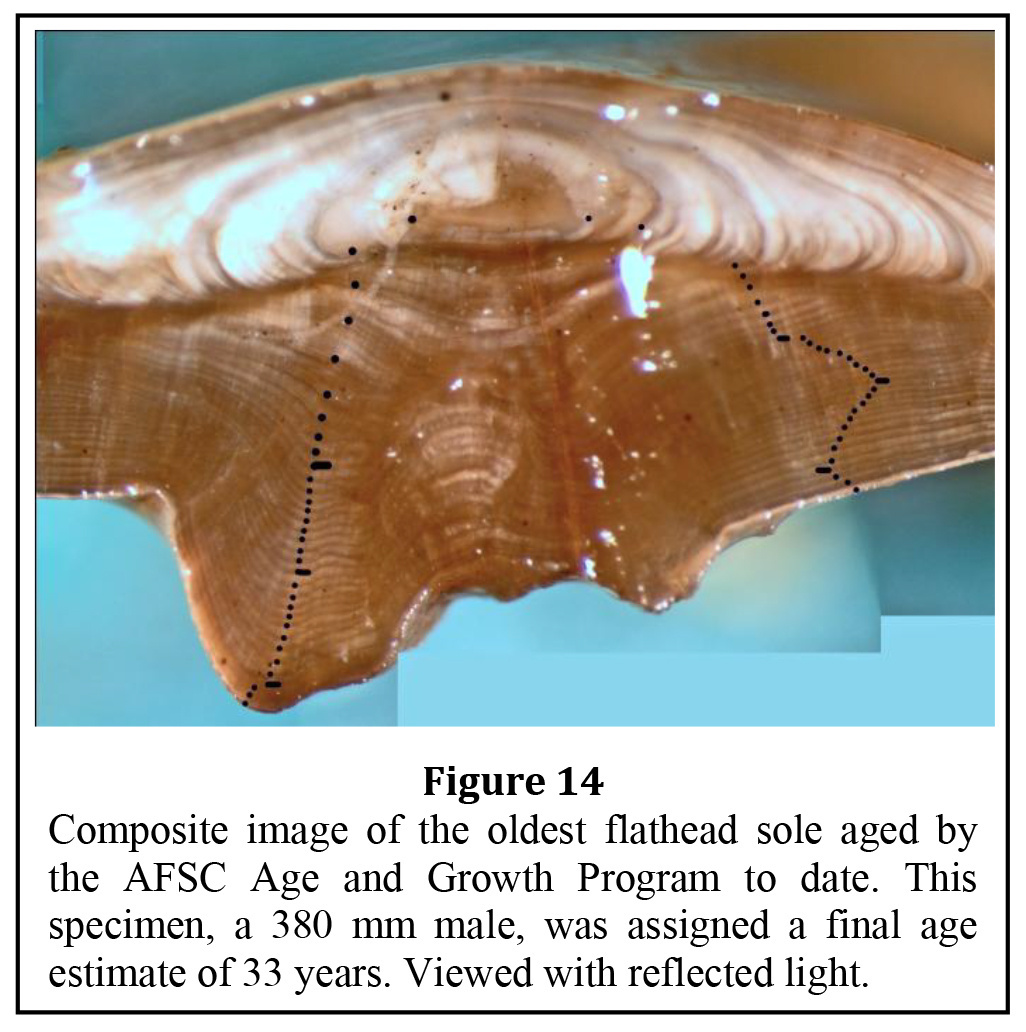