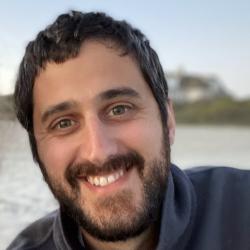 Chief of Staff for Science and Research (Acting)

Andy Ostrowski is the acting chief of staff for science and research at the Southeast Fisheries Science Center.

Andy grew up in a small town in Connecticut, but would spend time in Long Island Sound and at the local aquarium throughout his formative years. That led to his pursuit of a Bachelor's degree in Marine Biology from the University of North Carolina-Wilmington in 2006 and followed up by a Master’s in Marine Science, also at the University of North Carolina-Wilmington, in 2009. Afterwards, He worked as a contractor for NOAA’s National Ocean Service’s in Beaufort, North Carolina focusing on the effects of Aquaculture on the environment.

In 2012, Andy switched positions coming to NOAA Fisheries and began his center career as a contractor in the Age and Growth Lab in Beaufort. He became the species lead for blueline tilefish, greater amberjack, and most of the grouper species. He has over ten years of experience in the SouthEast Data, Assessment, and Review (SEDAR) process including data collection and analysis. Andy was hired as a federal employee in April 2016 to continue his work with life history of fishes and he took on more responsibilities as lab manager. Andy ensures all processing machines, microscopes, and lab equipment are working properly and purchases what is needed to keep everything running smoothly. He has been diving into research relevant to the field and has received Marine Fisheries Initiative (MARFIN) funding to investigate the potential use of Fourier-Transferred Near Infrared Spectroscopy, otolith weight, and otolith shape as predictors of novel ageing techniques and stock structure.

In 2019, Andy was recognized as a NOAA Fisheries Employee of the Year! While not at work, Andy spends time with his family playing at the beach or in the sound, riding bikes around the neighborhood, and traveling to experience new things together.