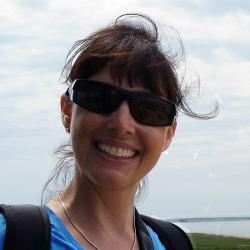 Marjorie is a Research Fishery Biologist in the Protected Species Branch at the Northeast Fisheries Science Center in Woods Hole. She has been a member of the Bycatch Team since 1998 estimating bycatch of small cetaceans and pinnipeds, applying various analytical methods in commercial gillnet and bottom trawl fisheries that range from Maine to North Carolina, USA. Marjorie works closely with the NEFSC Fisheries Sampling Branch for monitoring and sampling bycatch of marine mammals and works on bycatch issues in local, regional, national and international forums. She recently completed two years of academic training in NOAA's Advance Studies Program and is continuing her PhD program at the School of Marine Science and Technology at the University of Massachusetts Dartmouth. She now spends half her time studying foraging ecology of harbor and gray seals in the Northeast Region. Her PhD research aims to address the role of pinnipeds in the Gulf of Maine, Georges Bank/Southern New England ecosystems in support of the Center's research on integrative multi-species and ecosystem stock assessments.

Marjorie received an A.S. from the Stockbridge School of Agriculture in 1991 followed by a B.S. from University of Massachusetts Amherst in 1992. She began her career at the NEFSC in 1991 as a summer hire for the Bluefin Tuna Program and quickly transitioned to the Population Dynamics Branch where she worked until 1996 assisting senior scientists in developing fisheries stock assessments for coastal and demersal species, developing an appreciation for inferential statistics, large biological data-sets and spending a lot of time at sea counting critters on the NEFSC various marine resource surveys. She left the NEFSC in 1996 to pursue a M.S in Marine Biology at the University of Massachusetts Dartmouth Center for Marine Science and Technology (now known as SMAST). Upon graduation in 1998 she was hired as a contractor with the Protected Species Branch at the NEFSC to work on estimating bycatch of Harbor Porpoise in gillnet fisheries. In 2001 Marjorie was hired by NOAA as full time Research Fishery Biologist. Since that time Marjorie received the NOAA Administrators Award in 2003 and Department of Commerce Silver Medal in 2007 for her work on Take Reduction Teams reducing bycatch of marine mammals. In 2012 she completed an Executive Leadership Program and has served as Chair to the International Council for the Exploration of the Sea Working Group on Bycatch of Protected Species (2015-2017). In her spare time she enjoys being home with her family, traveling, spending as much time as possible in the great outdoors and away from all media devices.