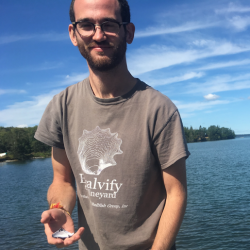 Zach is an Assistant Extension Educator focused on regional shellfish aquaculture with Connecticut Sea Grant based at the NEFSC - Milford Lab.  He is working to connect Milford Lab researchers to the Sea Grant extension network and industry members throughout the Greater Northeast region from Maine - Virginia.  He works to facilitate the transfer of research and ideas between Milford Lab scientists and stakeholders in the aquaculture industry.

Zach attended Skidmore College in New York for his undergraduate degree (2011-2015) in Environmental Sciences, and received a Masters Degree in Ocean Food Systems from the University of New England in Maine (2019-2020).  He began his career in Aquaculture working at the Martha’s Vineyard Shellfish Group in Oak Bluffs, MA and has worked on shellfish farms growing oysters, mussels, scallops and kelp. His work has been conducted at the nexus between government, private industry, and NGOs.  He has worked on a variety of stakeholder driven projects, including oyster shell recycling efforts.  Zach grew up on the Connecticut coastline and enjoys snowboarding, hiking and travelling.