NOAA Fisheries-Alaska survey season off the Alaska coast is underway. Scientists use collected data to monitor trends and abundance of fish, crab and other species taken in commercial, recreational and subsistence fisheries throughout Alaska and to support biological and ecological studies. Under federal law, NOAA Fisheries is responsible for monitoring and managing marine resources in federal waters. 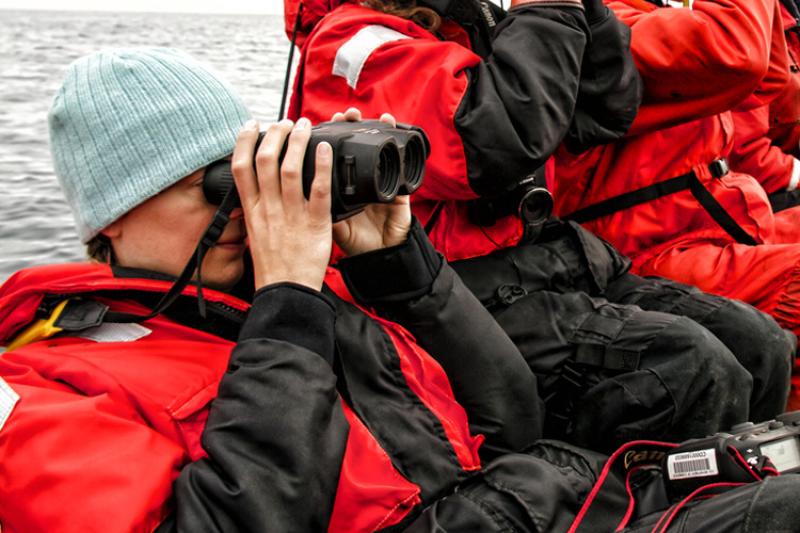 “Long term, scientific surveys like this are really important,” said Jeremy Rusin, NOAA Fisheries Alaska Fisheries Science Center Deputy Director. “Even though our surveys only sample a very small percentage of the ocean, we actually are able to detect changes to marine ecosystems over broad areas over time with the help of a little math. The information we collect is essential because these marine ecosystems provide jobs, a stable seafood supply for U.S. citizens, and help preserve a traditional culture based on subsistence harvesting that has endured for centuries.”

During surveys, NOAA scientists sort, weigh, and count species collected by each sampling gear or tallied by advanced sonar systems. They also collect specimens and data on various species, as requested by cooperating scientists, agencies, and institutions. For example, during the eastern Bering Sea survey, one project involves deploying a sonar system mounted on a catamaran and towed behind the research vessel to see how fish are affected before they enter the survey net. 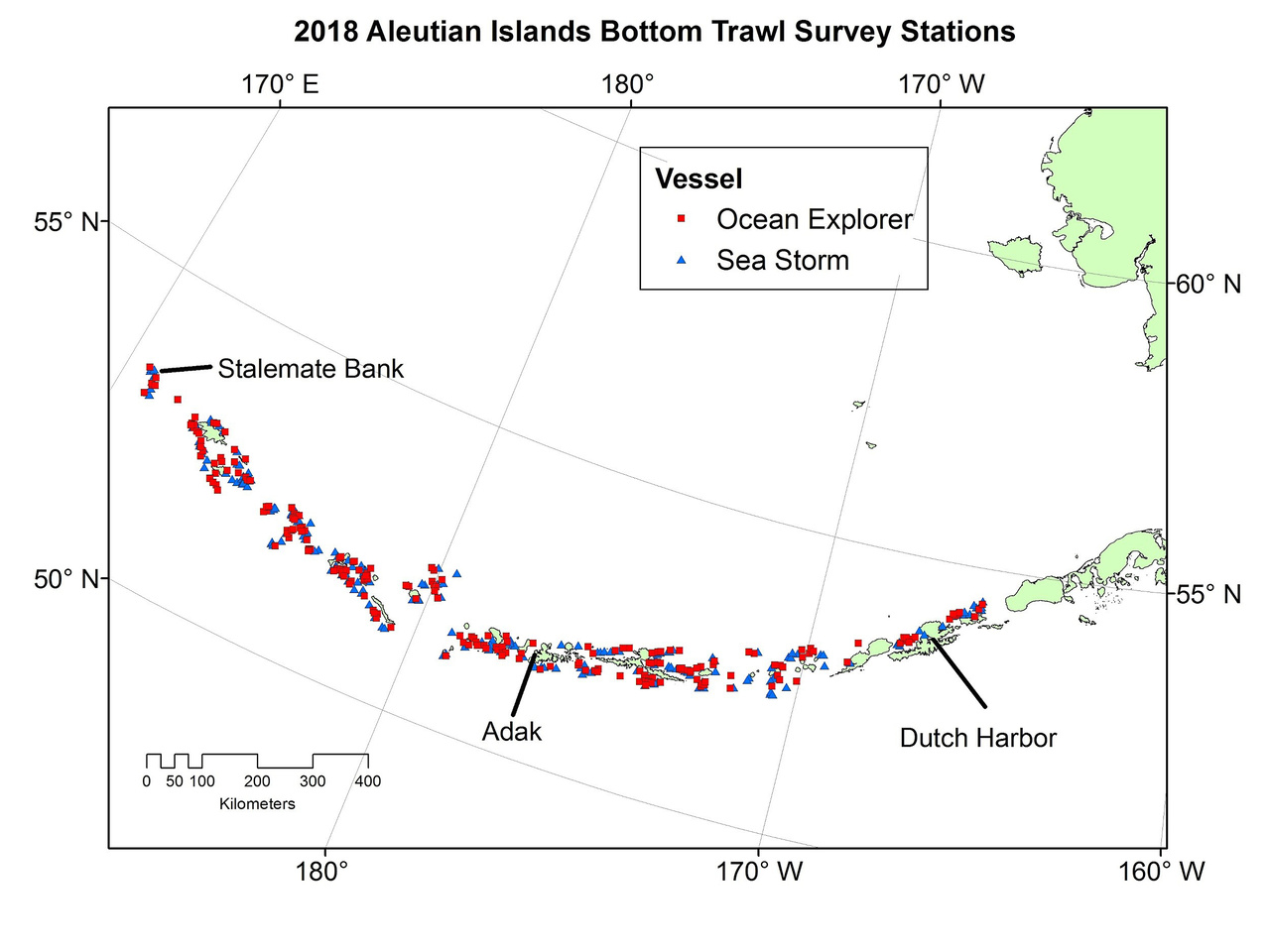 This long-running, biennial survey includes two chartered fishing vessels, F/V Sea Storm and F/V Ocean Explorer. Its purpose is to monitor trends in distribution and abundance of groundfish, crabs and other bottom-dwelling species, and to measure various biological and environmental information. Scientists use estimates of fish biomass and population derived from this survey in annual stock assessments of the Aleutian Islands groundfish and ecosystem models. Collaborating partners include the International Pacific Halibut Commission, University of Washington, NOAA Fisheries Northeast Fisheries Science Center, and University of Alaska Fairbanks. The survey runs from June 5 to August 14, beginning and ending in Dutch Harbor, AK However, before the survey is over, both of the vessels will have reached Stalemate Bank in the eastern hemisphere (on the same longitude as New Zealand)!

Longline Survey in Aleutian Islands and Gulf of Alaska 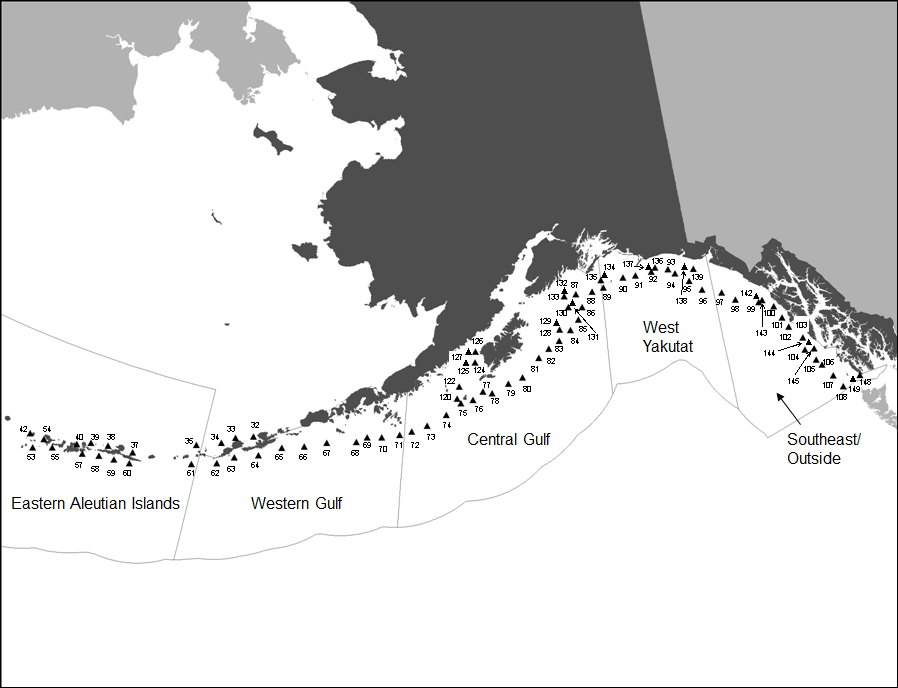 Scientists will be aboard the chartered fishing vessel F/V Alaskan Leader to conduct a longline survey from June 1 through August 26. The vessel will be operating in the eastern Aleutian Islands and the Gulf of Alaska. Longline operations will be conducted along the continental slope to catch major groundfish species, including sablefish. The survey will begin and end in Dutch Harbor, AK, although shift changes for different legs will occur in other Alaska ports throughout the summer. 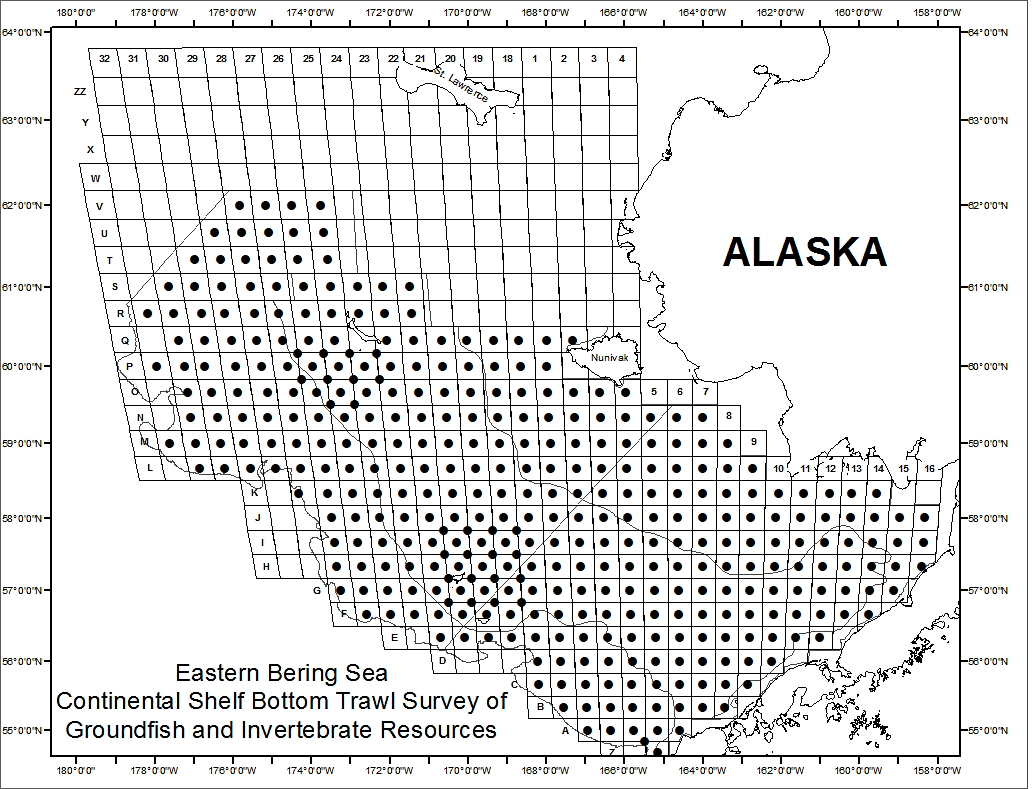 For the past 40 years, NOAA Fisheries has been conducting annual bottom trawl surveys of the continental shelf of the eastern Bering Sea to monitor the status and trends in commercial fish and shellfish stocks. Focus species include walleye pollock, Pacific cod, Greenland turbot, yellowfin sole, northern rock sole, red king crab, and snow and Tanner crabs. Scientists use estimates of biomass and population from this survey in annual stock assessments of eastern Bering Sea groundfish and crabs, and in Bering Sea ecosystem models. Scientists collect additional data on the survey to improve understanding of species’ life history, and the ecological and physical factors affecting their distribution and abundance.

Collaborators include scientists from the Alaska Department of Fish and Game, International Pacific Halibut Commission, University of Washington, and University of Maryland Eastern Shore. Scientific staff will conduct survey operations aboard the F/V Alaska Knight and F/V Vesteraalen to conduct the annual shelf survey from May 30 to August 8. Vessels will begin sampling at the eastern end of Bristol Bay, AK and progress westward until completed. The port of departure and return is Dutch Harbor, AK. 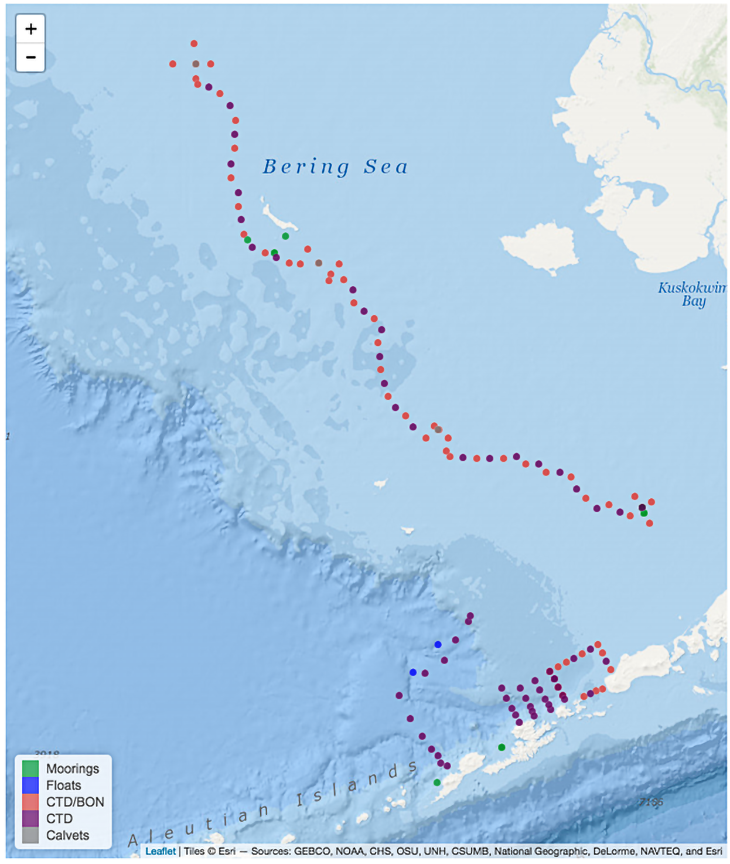 Planned stations during the Spring and Autumn Moorings and Ecosystem Observations Survey.

NOAA Research and NOAA Fisheries are collaborating to recover and deploy a suite of long-term oceanographic moorings in the Bering Sea from the southern eastern Bering Sea shelf to St. Matthew Island and north. A latitudinal transect from ~57 oN to ~64 oN was occupied between April 29 and May 10. Moorings were deployed at selected locations along the transect to monitor the physical oceanographic environment, phytoplankton, and zooplankton, and to document marine mammal sounds. Ecosystem observations in spring were among the first to document the state of the Bering Sea ecosystem after a period of record-low sea ice during the winter of 2017-2018. 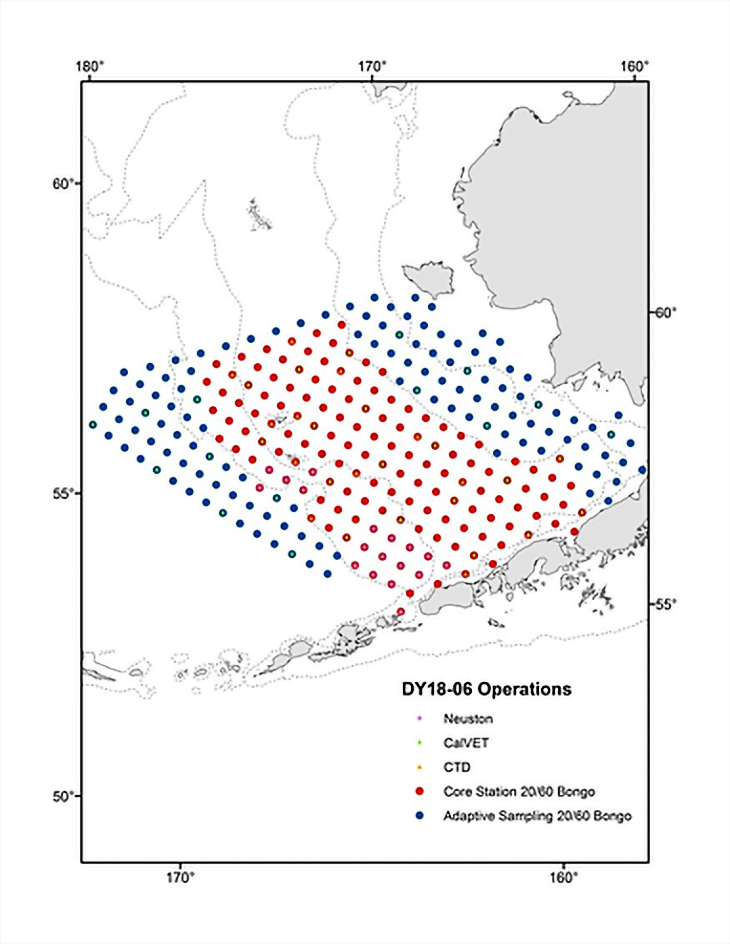 NOAA Fisheries is conducting process research aboard the NOAA Ship Oscar Dyson in the eastern Bering Sea to examine the effects of climate variability on lower trophic level zooplankton and larval fish. This research is part of a long-term investigation examining factors contributing to recruitment variability of key economic and ecologically important fish including walleye pollock, Pacific cod, rock sole, and sablefish. Results are used to evaluate recruitment potential of groundfish species, resolve underlying mechanisms of variation, and forecast recruitment strength. Ecosystem data are also collected as part of this research including information on ocean currents, heat and salt content, nutrients, phytoplankton, and zooplankton. The survey ends on June 1 with the ship returning to Dutch Harbor, AK. 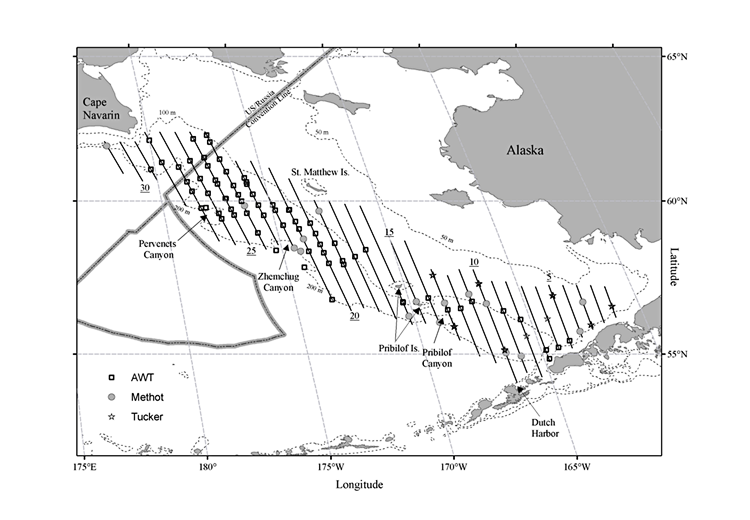 Planned survey transects for the 2018 Acoustic-Trawl Pollock Survey of the eastern Bering Sea.

NOAA Fisheries conducts an acoustic trawl stock assessment survey of the eastern Bering Sea in summer to estimate the distribution and abundance of walleye pollock. This summer’s survey will be the 21st in a time series begun in 1979 (now done on a biennial schedule). Other research is often conducted during the summer’s survey. Examples of such projects this year are broadband acoustic classification, acoustical and stereo-optical measurements of individual fish, and opportunistic physical oceanography. This survey, on the NOAA Ship Oscar Dyson, begins June 6 and concludes on August 15. The port of departure and return is Dutch Harbor, AK. 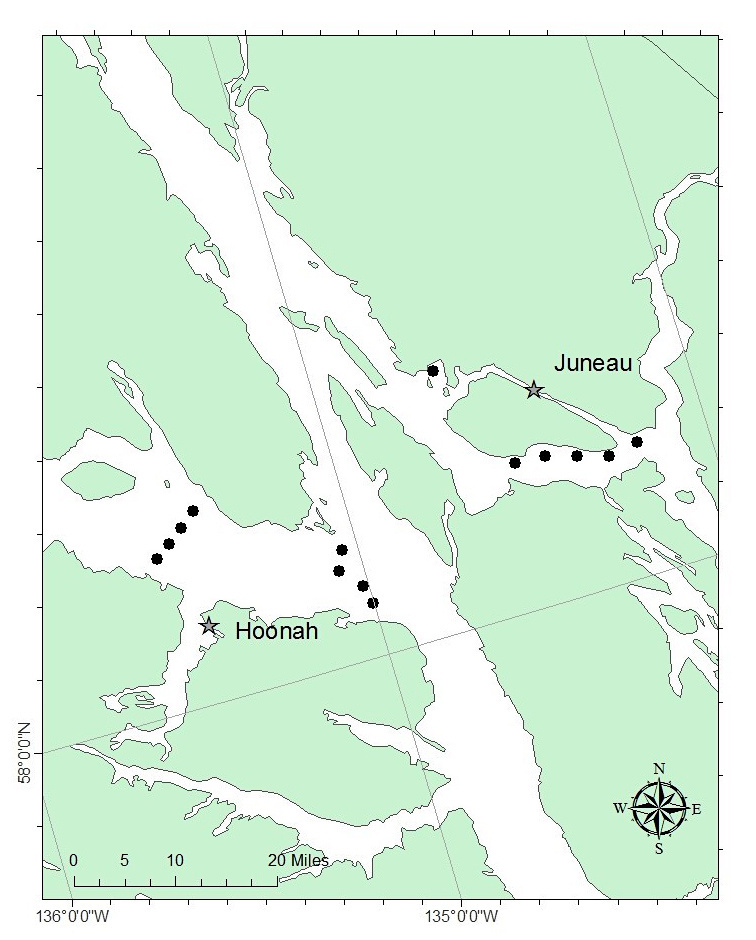 Planned survey transects for the 2018 Southeast Coastal Monitoring Survey within inside waters of southeast Alaska. Transects will be sampled during June, July, and August.

During the summer of 2018, NOAA Fisheries scientists will work with the Alaska Dept. of Fish and Game to conduct a fisheries oceanographic and salmon survey within northern southeast Alaska. This will be the 21st year of the survey which samples the upper water column and is used to evaluate the status of the ecosystem including juvenile salmon and other species. Amongst other things, the data shows the effects of changing temperature and has been used to produce a forecast of pink salmon returns the following year which has proven valuable to the seafood industry. In 2018 the survey will include new stations designed to see if the survey could be modified to forecast Chinook salmon returns. 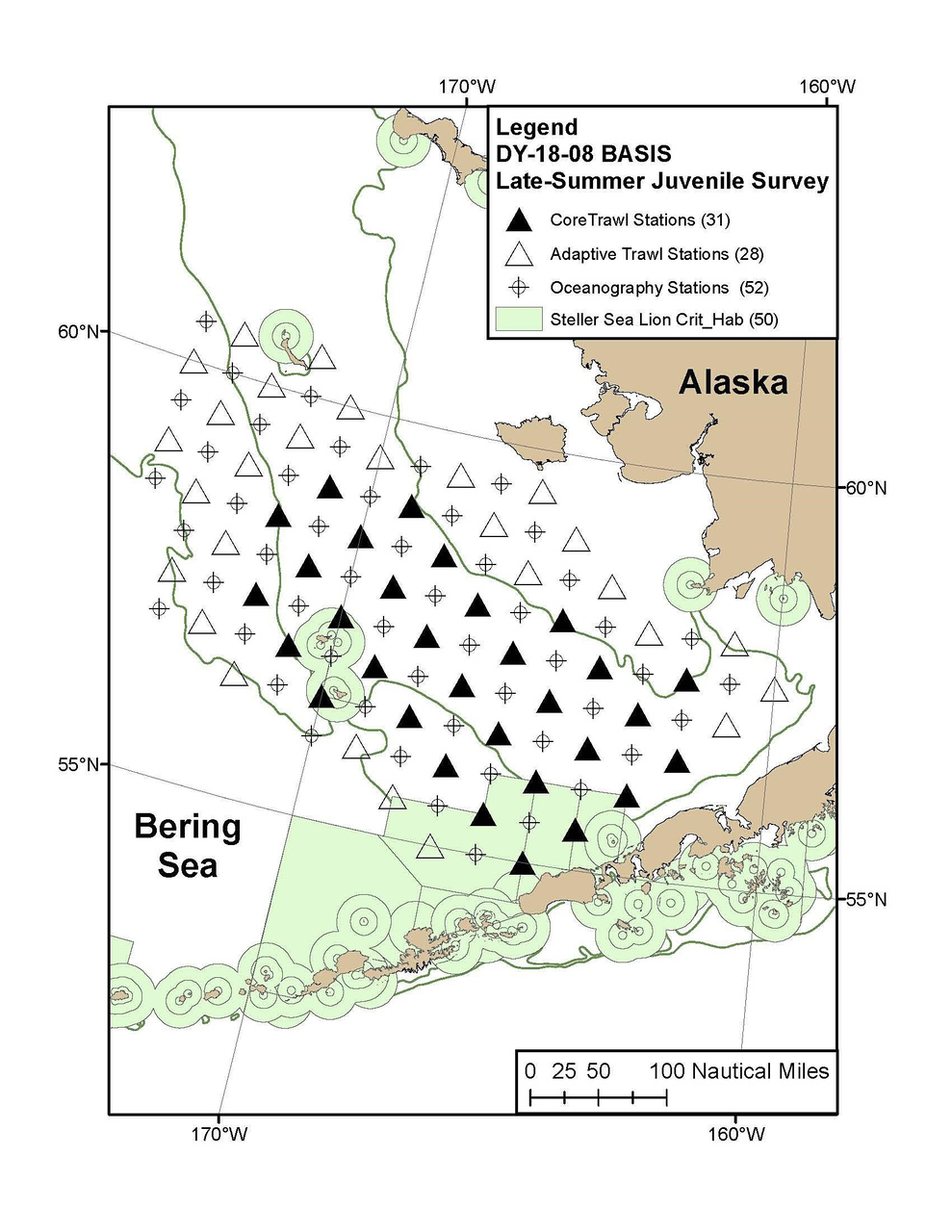 From August 20 to September 18, NOAA Fisheries and NOAA Research scientists will conduct a fisheries (surface, mid-water trawls) and oceanographic survey to examine the distribution, abundance, size, diet, and energy density of juvenile walleye pollock, salmon, Pacific cod, and forage fish (capelin, eulachon). Survey observations and measurements will also include physical, chemical, and biological oceanography, as well as observations of zooplankton, phytoplankton, and seabirds. This survey will host a K-12 teacher through the NOAA Teacher at Sea Program. Survey results are used to evaluate the influence of oceanographic conditions on survivorship and condition of Alaskan ground- and forage fish and forecast recruitment potential. The port of departure and return is Dutch Harbor, AK. 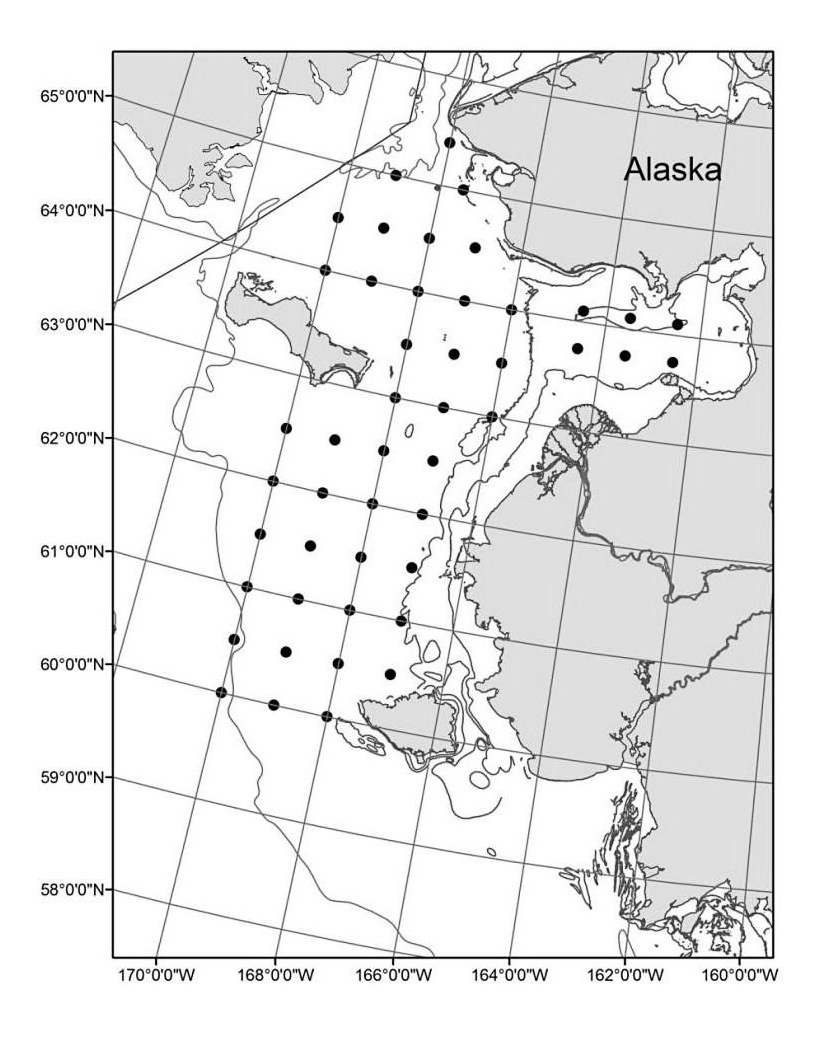 NOAA Fisheries conducts fisheries oceanographic surveys to gather needed data to understand the impact of loss of sea ice on the northeastern Bering Sea ecosystem. These surveys which have been occurring since 2003, partner with the Alaska Department of Fish and Game and US Fish and Wildlife Service to provide annual information on the status of salmon, groundfish, forage fish and seabirds as well as the state of the pelagic ecosystem in the northern Bering Sea. The 2018 survey will be conducted aboard a chartered fishing vessel, that will start and end in Dutch Harbor Alaska on August 25 through September 20. There will be a port call in Nome Alaska, midway. 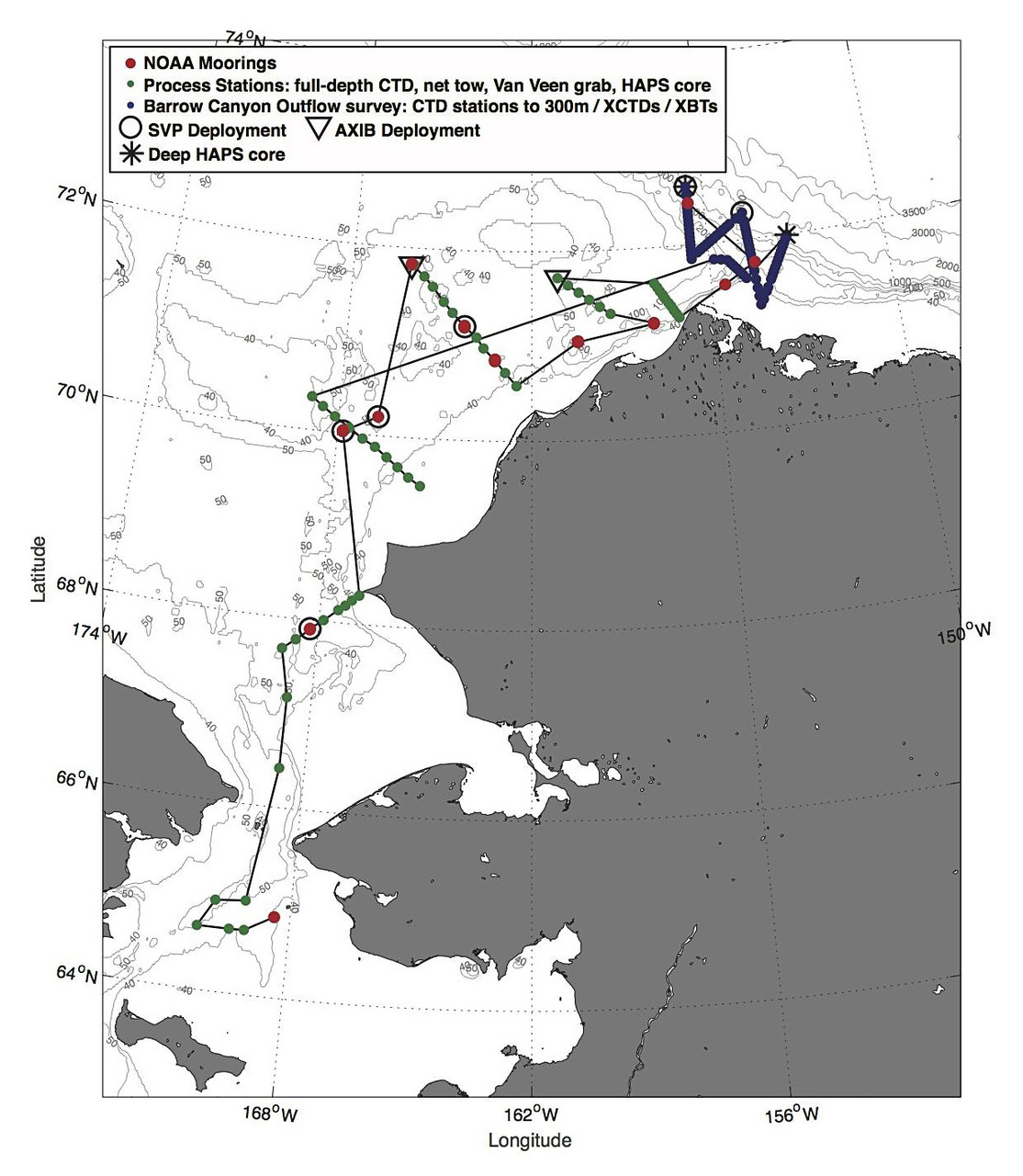 Planned stations for the 2018 DBO Survey.

On August 6, NOAA Fisheries and NOAA Research will collaborate as part of a multi-institutional, cross-disciplinary research team conducting work aboard the U.S. Coast Guard Cutter Healy to maintain and extend the network of climate observing systems in the US Arctic. These observing systems, including the network known as the Distributed Biological Observatory (DBO), measure the temperature of the water and air, presence and extent of sea ice, species abundance, biodiversity and production. Scientists will use data from these annual observations to document current physical state of the U.S. High Arctic (Chukchi and Beaufort Seas) and examine the biological and ecological responses to that physical environment. Researchers work with national and international partners and well as members of the local native communities to make observations from a suite of Arctic climate observatories. Results are used to increase understanding of processes involving ocean heat, circulation, and transport pathways into and out of the Arctic region, and to resolve effects on lower trophic level biological resources (plankton). The survey ends on August 23. Port of departure and return is Dutch Harbor, AK.

Seabed Mapping to Quantify Untrawlable Habitats in the Gulf of Alaska 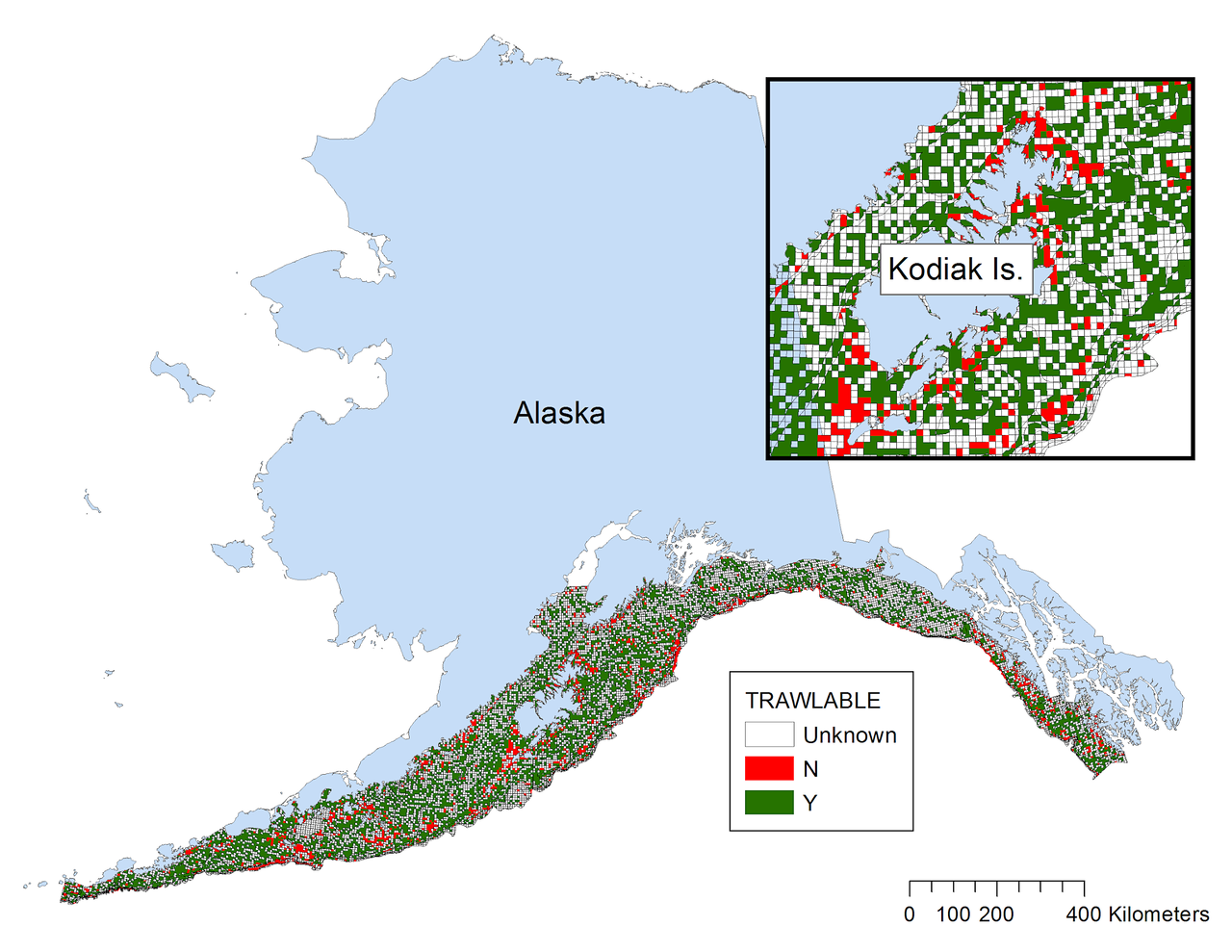 Map of trawlable/untrawlable stations derived from previous Gulf of Alaska surveys. This research cruise will be focused around Kodiak Island.

A research cruise will be conducted aboard the NOAA Ship Fairweather with the aim to develop a method to distinguish trawlable and untrawlable seafloor. Acoustic data will be collected with a hydrographic-quality sonar system in the Gulf of Alaska, from August 27 – September 11. Quantitative backscatter and bathymetric data will be simultaneously and continuously acquired along tracklines previously classified as trawlable or untrawlable by AFSC bottom trawl surveys in the Gulf of Alaska. Multiple tracklines will be placed over ranges of depths and slopes that are most commonly encountered during the NMFS bottom-trawl survey. Time permitting, selected 5x5 km stations will be 100% surveyed to examine the relationship between fine-scale granularity in the seabed properties and prior misclassifications of trawlability. The results from this research will be used to develop an efficient and reliable method to delineate trawlable and untrawlable habitats based on hydrographic and geophysical information that will address a major potential source of bias in GOA stock assessments that use bottom-trawl-survey data. The survey will also produce new hydrographic-quality bathymetric data for updating NOAA nautical charts. 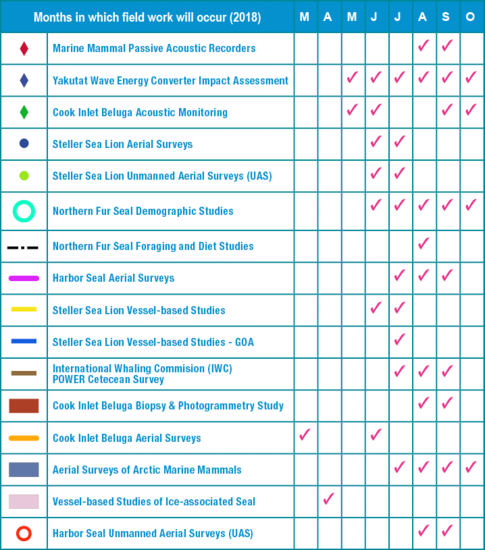 The table displays in which months the research will occur and the general locations where the work will be conducted.