Research on Hawaiian monk seals and green sea turtles continued in these remote islands, despite unprecedented challenges this year. 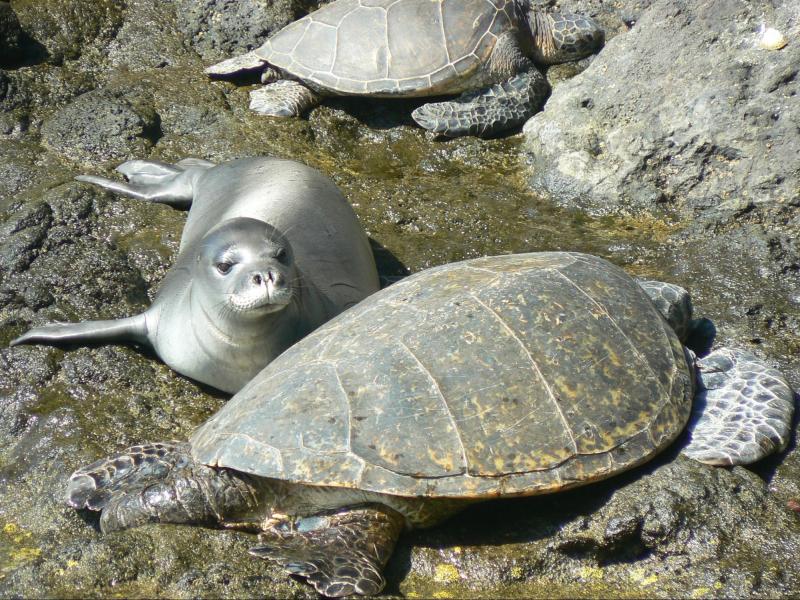 Typically, the Pacific Islands Fisheries Science Center deploys field teams during the spring and summer to the Papahānaumokuākea Marine National Monument. There, they conduct research and rescue activities for threatened green sea turtles and endangered Hawaiian monk seals at five key breeding sites: French Frigate Shoals, Laysan and Lisianski Islands, Pearl and Hermes Reef, and Kure Atoll. The teams also conduct surveys during short visits at the Nihoa and Mokumanamana (Necker) Islands and Midway Atoll. Due to the uncertainties created by the COVID-19 pandemic, NOAA Fisheries decided to cancel this survey and field effort in 2020. Fortunately for the conservation of these species, our partners were able to step up and  salvage part of the 2020 field season. Data are also coming in from satellite tags on a handful of monk seals and a green turtle.

We have conducted field studies in the Northwestern Hawaiian Islands for 47 years for sea turtles and 36 years for monk seals. These islands and atolls are nesting habitat for more than 90 percent of Hawaiian green sea turtles and home to 75 percent of the Hawaiian monk seal population (about 1,100 seals). These invaluable long-term datasets provide current population statuses and trends and insight on how climate change is affecting these animals and their habitat. Combined, this information guides management and recovery actions.

Our Partners Leading the Effort

Some of NOAA’s partners were already in the field when the COVID-19 pandemic began. They were able to continue their habitat restoration and bird monitoring operations at Kure Atoll (State of Hawaiʻi, Department of Land and Natural Resources) and Midway Atoll (U.S. Fish and Wildlife Service and Pacific Rim Conservation). During the fall and winter months when our teams are not deployed, these partners assist us by reporting opportunistic observations of important events such as births, injuries, and deaths, and the Kure team typically surveys the shoreline every few weeks. They increased their seal and turtle observations and provided some of the data in turtle nesting, seal births, and juvenile seal survival that are crucial to our science.

Friends of Hawaiian Islands National Wildlife Refuges, USFWS, and DLNR also collected data during short visits to French Frigate Shoals and Nihoa Island. The Papahānaumokuākea Marine Debris Project and the USFWS collected more data at French Frigate Shoals in late October. These observations will help us paint a partial picture of the monk seal and sea turtle populations in these remote places in 2020.

Our field scientists contribute to species recovery through direct, life-saving interventions. In most years, field teams rescue turtles, seals, and seabirds entrapped in the deteriorating seawall at Tern Island in French Frigate Shoals. They disentangle animals and remove marine debris from beaches across the Northwestern Hawaiian Islands in coordination with the marine debris removal team. Other activities include reuniting monk seal mom/pup pairs, moving weaned pups away from hazards, vaccinating seals, and caring for sick and malnourished seals.

This summer, our partners rescued two animals from near death. One was a turtle stuck in the deteriorating seawall on Tern Island at French Frigate Shoals. The other,  a weaned monk seal pup entangled in a net offshore of Green Island at Kure Atoll. Over many years, these and other interventions have bolstered the seal population by nearly 30 percent!

Even in the absence of our typical on-the-ground surveys, we were able to remotely follow four animals (three monk seals and one green turtle). They were wearing special tags that relay location data to satellites. In September 2019, the NOAA field teams rescued four female weaned pups: two from Lisianski Island (LL00 and LL34) and two from Pearl & Hermes Reef (DL32 and DL36). These seals were malnourished and would not have survived without rehabilitation. They were taken to The Marine Mammal Center’s monk seal hospital, Ke Kai Ola, in Kona on Hawai‘i Island. After 10 months, it was time for them to return home. However, accessing the Northwestern Hawaiian Islands with four seals (each weighing around 200 pounds) was uniquely challenging during the pandemic. The U.S. Coast Guard flew the four seals to Midway Atoll in early August, where our biologists and partners released them back into the wild. We outfitted three of the four rehabilitated seals with satellite tags to monitor how they acclimated to their new home in the wild.

From your own computer, you can follow their adventures, too!

We monitor their movements carefully every week. We were a little surprised when, less than 4 weeks after release, the tag on seal LL34 stopped transmitting. Did the tag fail (battery die or other malfunction), fall off, or did something terrible happen to LL34? We were on pins and needles until USFWS personnel reported a sighting at Midway. The seal was in good condition, but her satellite tag was missing. Whew, a sigh of relief that it was only a lost tag! This happens eventually for all of them. Fortunately, all four seals are still doing well.

Another remarkable observation was that seal LL00 swam all the way to Kure Atoll—about 60 miles from Midway. The Department of Land and Natural Resources team stationed on Kure has confirmed seeing LL00, “the explorer seal”!

In addition to the three seals, we deployed a satellite tag on a basking green turtle on Oʻahu before the pandemic quarantine started. On March 12, the turtle team set out for the North Shore of Oʻahu. They wanted to perform an ultrasound to try and find a turtle in the early stages of egg development. Just like last year's success with Motherload, they were able to find one and attach a satellite tag to track her migration to her nesting ground.

Read more about the nesting journey of this fertile turtle, Punahele

From her satellite data we can derive that she nested four times on Tern Island and spent the majority of her time around Trig Island. After spending 71 days at French Frigate Shoals, the O‘ahu turtle team was happy to see her arrive back on the North Shore on August 18.

Making the Most of a Brief Season

Though the seasonal field staff were unable to go to the Northwestern Hawaiian Islands, they still provided valuable contributions to the turtle and seal research programs. They packed and prepared equipment and supplies which stand ready to be used next field season. They created new protocols and training modules. They developed our first electronic database for field camp inventory to organize and track all of the gear for our remote research. These new protocols will help us uphold the strict biosecurity protocols that protect these important places.

The team also helped us to catch up on backlogs of important data and worked with USFWS and Malama Na Honu to conduct nest excavations. It turned out to be a record high season of nest observations on O‘ahu. All of this preparation has positioned us to hit the ground running next year if it is safe to do so.

From our dedicated seasonal field staff to our many partner agencies, our staff are grateful for everyone who came together this summer. Despite all odds, they helped us monitor these important species. With many resources prepared and lessons learned from the last few months, our programs are eager to see what the next field season will bring.