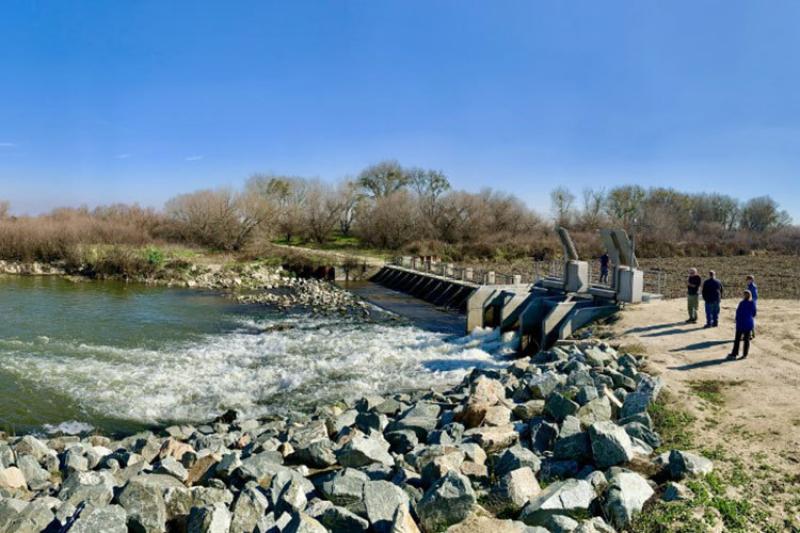 Connley Clayton, a third-generation farmer in California’s Central Valley, stood surveying the San Joaquin River flowing past Sack Dam, a century-old irrigation diversion. He could see that the river, and its salmon, are on their way to recovery.

“We are so happy that the river is running again,” said Connley, 75, who lives about 10 miles north of the property in El Nido with his wife. Specifically, Connley references the stretch of river below Sack Dam, which would often run dry when flow is diverted for agricultural uses. Then in 2016, the San Joaquin River Restoration Program started releasing water specifically for river restoration.

The increased river flows are essential to the next major step in the restoration program. Project partners will reintroduce a population of threatened Central Valley spring-run Chinook salmon into the river. The NOAA Fisheries recovery plan for this threatened, keystone species depends in part on this reintroduction into their historical habitat. The Connleys have helped make that possible.

To help foster the restoration program, Connley deeded 8.1 acres of the Clayton Ranch to the Bureau of Reclamation last December. The riverfront site will eventually become a natural fishway that will allow migrating spring-run Chinook salmon to navigate around Sack Dam. The dam is one of several obstacles that block salmon from accessing their historical spawning grounds.

The Clayton's ranch has always been a family affair. Connley’s father, Forrest, bought the 1,100-acre ranch with his brother Claud from the Cook Land & Cattle Company, Inc. in 1953. Connley and his sister, Barbara Weber, own the ranch. His stepdaughter, Larkin Harman, actively farms the land. Harman said she plans to plant olive trees on the property she took over, in addition to the almonds and wheat they already grow.

Connley decided to donate the land for river restoration after meeting staff during a meeting in Reno a few years ago.

“I met Dr. [Don] Portz (Program Director for the Bureau of Reclamation), and we decided to work with the Don because we believe that restoration is a good thing,” Connley said.

Larkin Harman believes it is important that the agricultural community support the restoration program, even though initially there was some hesitancy about the program’s efforts.

“I really see this as an opportunity to show America that agriculture isn’t opposed to environmental restoration,” she said. “We are enthusiastic and want to show that agriculture and the program can work together.”

For the San Joaquin River Restoration Program, the donation is an opportunity to continue advancing river restoration. The Clayton’s contribution demonstrates the power of local partnerships to conserve species listed under the Endangered Species Act.

“We are extremely grateful to the entire Clayton family for their generous donation to the Program and ultimately, to the river,” said Bureau of Reclamation Program Manager, Don Portz.

As one of the implementing agencies, NOAA Fisheries is encouraged to see landowner support. Landowner partnerships like this will move the species away from extinction and towards recovery.

“The population of spring-run Chinook salmon currently being reintroduced is crucial to the species' recovery, and will help the species be resilient to increasing changes in climate,” said NOAA Fisheries Assistant Regional Administrator, Cathy Marcinkevage.

For Connley, he hopes that his actions are part of a larger effort unfolding to restore the river.

“Wouldn’t it be great if everyone could create some habitat on their land to help the environment?” he asked.