Alaska Pollock Spawning Season May Be Earlier Under Climate Change

A new study shows how climate and fishing are changing pollock spawning time, and how changes in spawning time could affect fisheries in the future. 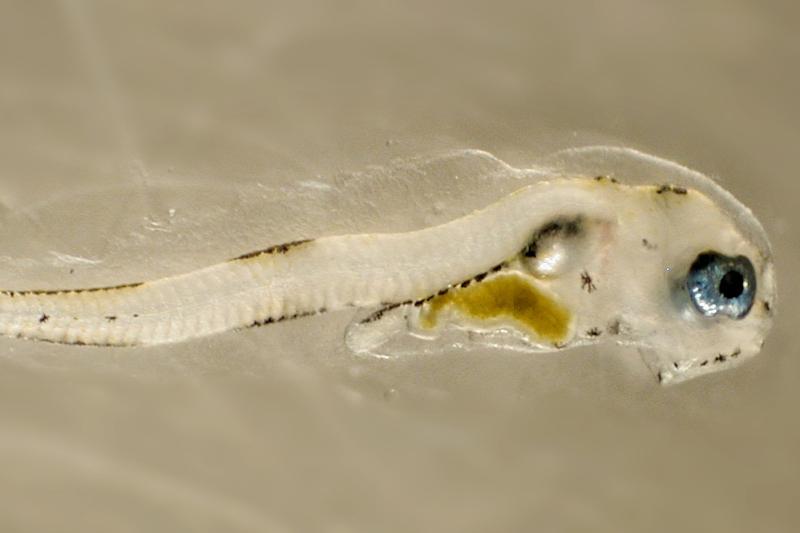 Successful year classes of pollock are largely determined by survival of early life stages, which depends on the environmental conditions they encounter due to spawn timing. 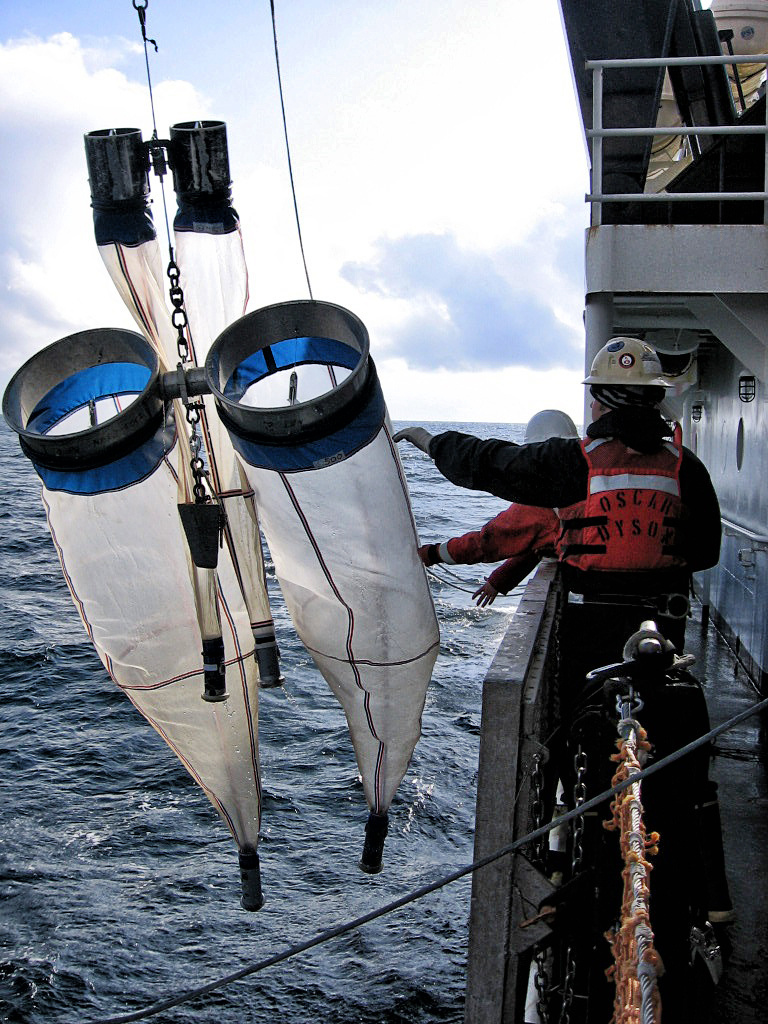 NOAA Fisheries scientists collect larval fish and their plankton prey during a Gulf of Alaska Survey.

A new study using an unprecedented 32-year data series reveals that spawning time of Alaska pollock-- target of the Nation’s biggest fishery-- varied by as much as three weeks over the past three decades in the Gulf of Alaska. The 2018 study found clear evidence that the changes were driven by both climate and fishing.

Changes in spawn timing have major ecological and management implications. Timing is critical to survival of newly hatched fish as it determines the conditions they encounter. Many marine fish, like pollock, are adapted to spawn in time for offspring to meet the rapid increase of their plankton prey in spring. If they arrive too early, there may not be enough food; if they arrive too late, the young fish will have less time to grow and will be small compared to their predators and competitors.

Because most mortality happens during the first few weeks of life for pollock, changes in spawn timing that affect larval survival can strongly affect recruitment success--how many fish are available to the fishery two or three years later.

“To effectively monitor and manage pollock populations, managers need to understand what causes changes in spawn timing. With ongoing warming of the world’s oceans, we need to know how changing climate conditions interact with other processes, like harvesting, to influence spawning time,” says Lauren Rogers, the NOAA Fisheries biologist who led the study.

Toward that end, Rogers’ team investigated how pollock spawn timing has shifted over warm and cool periods and large shifts in age structure in the Gulf of Alaska.

“The strength of our study is comprehensive information from an amazing 32-year time series of larval fish size, age, and abundance, validated with maturation data from spawning females, and combined with at-sea process studies, laboratory experiments, and age readings. Using these resources, we were able to test for effects of climate and age structure on both mean spawn timing and duration, and forecast spawn timing under different scenarios of warming and fishing mortality,” Rogers says.

Warmer Temperatures Mean Earlier and Longer Spawning to a Point

Climate clearly drives variation in spawn timing of walleye pollock, with warmer temperatures leading to an earlier and longer spawning period. However, above a threshold temperature, increased warming had no additional effect on spawn timing.

“Because temperatures are projected to be consistently above that threshold with ongoing ocean warming, our results suggest that pollock spawn timing will become more stable in the future,” says Rogers.

Older, Bigger Mothers Spawn Earlier and Over a Longer Duration

An older spawning population started spawning earlier and over a longer duration than a population of predominantly young spawners, highlighting the importance of older mothers.

This is where fishing comes in: harvesting leads to a younger, smaller population over time. In general, increased mortality reduces the mean age of a population, and this effect is strengthened if older individuals are targeted through size selective harvesting. Besides direct effects of harvesting on age structure, fishing may cause evolutionary change by selecting for reproductive maturation at an earlier age or smaller size.

“Our models suggest that changes in pollock age structure associated with sustainable fishing can shift the mean spawning date to 7 days later and shorten the spawning season by 9 days compared to an unfished population, independent of climate conditions.” says Rogers.

That shift could cause young fish to arrive out of sync with their food in two ways: by decoupling the arrival of first feeding fish larvae from temperature-driven changes in plankton production; and by reducing the window over which young fish are delivered into the ecosystem, thus increasing the risk of mismatch with plankton production. 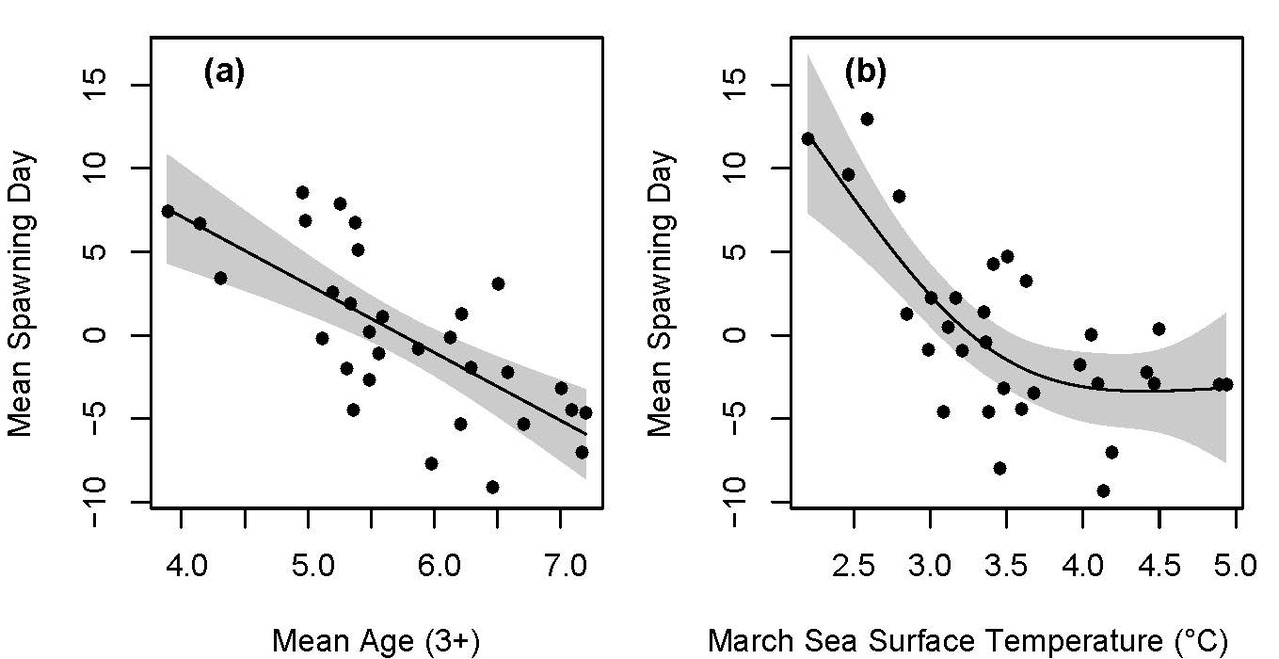 As age of the spawning population increases, spawning begins earlier (a). Warmer temperatures mean earlier spawning to a point around 4 ℃; above that temperature, spawning time levels out (b).

Spawn Timing and the Future

“Our models suggest that climate change will lead to an earlier, stabilized spawning season in the future.” Rogers says. “What we don’t know is how that will affect synchrony of first-feeding larvae with production of their zooplankton prey in spring.”

Rogers hopes future research will answer that question. “We are looking at ways to evaluate match-mismatch with prey by comparing prey and larval fish production.” She also hopes to develop the model into a practical forecasting tool. “If we could use climate and age composition data to predict spawn timing 3-4 months ahead, the forecast could be used to make sure surveys are optimally timed to coincide with peak spawning periods.” 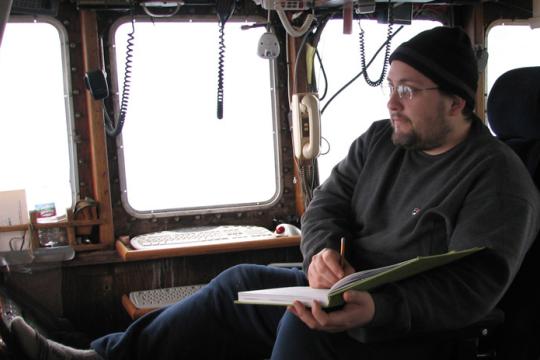