Baleen Whales Have Changed Their Distribution in the Western North Atlantic

A decade of acoustic data reveals changes in distribution in four species of baleen whales since 2010. Warming ocean waters and shifting prey could be among the reasons. 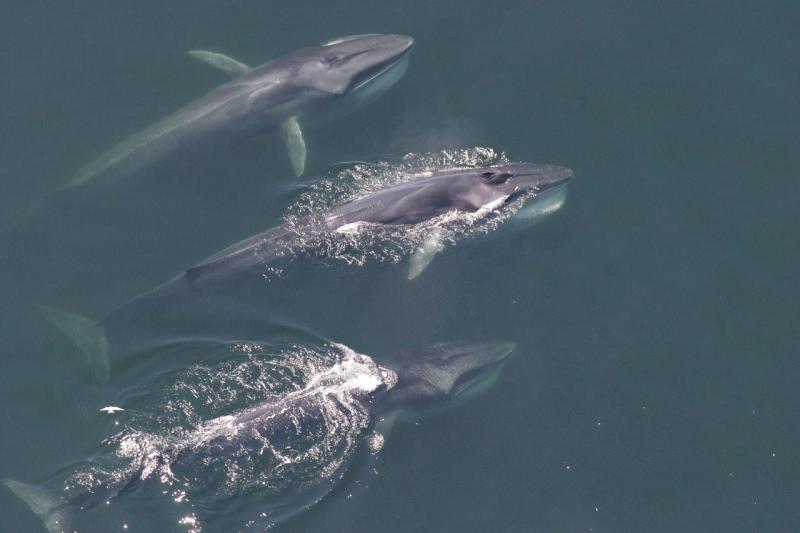 Researchers have been using passive acoustic recordings of whale calls to track their movements. They have found that four of the six baleen whale species found in the western North Atlantic Ocean — humpback, sei, fin and blue whales — have changed their distribution patterns in the past decade. The recordings were made over 10 years by devices moored to the seafloor at nearly 300 locations from the Caribbean Sea to western Greenland.

“All four whale species were present in waters from the southeast U.S. to Greenland, with humpbacks also present in the Caribbean Sea,” said Genevieve Davis, a senior acoustician at the Northeast Fisheries Science Center in Woods Hole, Massachusetts and lead author of the study. “These four species were detected throughout all the regions in the winter, suggesting that baleen whales are widely distributed during these months. Humpback, sei, fin, and blue whales also showed significant changes in where they were detected between the two time periods considered in this study: before and after 2010.” 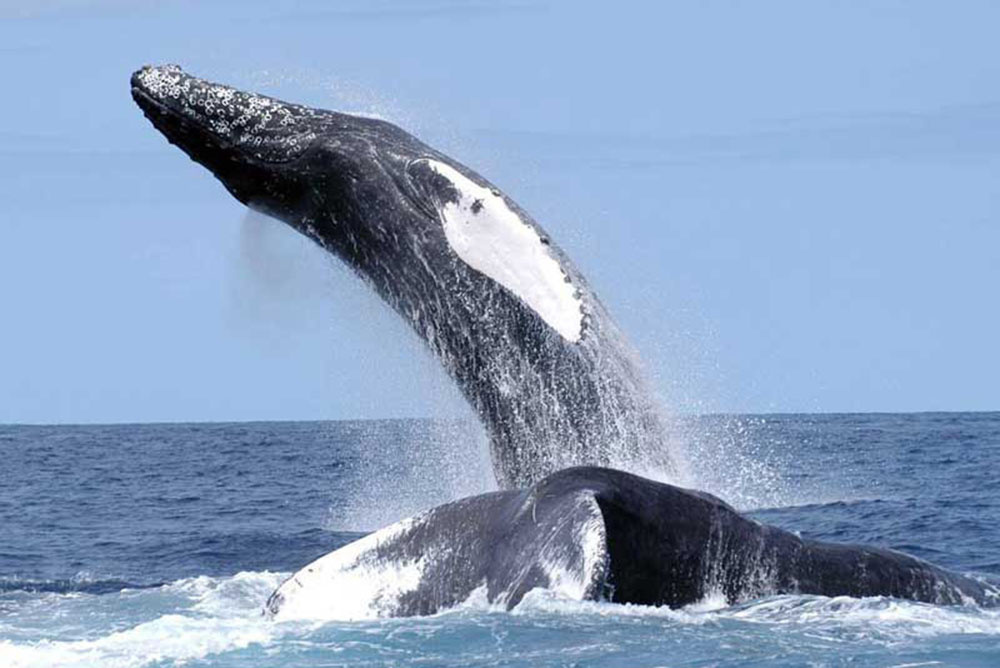 Humpback breaching. Humpbacks were detected in all regions, and are spending more time there than researchers had thought. Photo: NOAA Fisheries

A large group of federal, state and academic researchers from the United States and Canada conducted the study, published in Global Change Biology. It is the first to show the occurrence of these four species across the western North Atlantic Ocean over long time spans and at a large spatial scale. The study also demonstrates how whale distributions have changed over time, and in particular since 2010.

Data collected from 2004 to 2014 on 281 bottom-mounted passive acoustic recorders totaled 35,033 days of recording. These passive acoustic recorders were deployed between the tiny island of Saba in the Caribbean Sea to the Davis Strait off western Greenland. Recorders were located on the continental shelf or along the shelf edge, with six recording units in off-shelf waters.

All available passive acoustic recordings from more than 100 research projects throughout the western North Atlantic Ocean were combined to create the decade-long dataset. The time series was split between 2004 to 2010 and 2011 to 2014. That split was based on the timing of shifts in climate in the Gulf of Maine and distribution changes by numerous species in the western North Atlantic Ocean.

This is also the same time period used in a similar analysis of North Atlantic right whales that was published in 2017, and used for comparison with this study.

Results show that fin, blue, and sei whales were more frequently detected in the northern latitudes after 2010 but less on the Scotian Shelf area. This matches documented shifts in prey availability in that region.

Researchers have not yet studied if or how minke whale distribution has shifted. Minkes are the sixth baleen whale species found in the western North Atlantic Ocean.

Researchers caution that while recorders provided widespread coverage, there were gaps. Also, these data can confirm where and when a species is present, but not how many individuals are present. There are differences in vocal behavior, seasonal changes, and vocalizations thought to be made by males only. The data provide a comprehensive overview of the minimum distribution in space and time of each species and add information to the current understanding of these species.

While humpback whales are found in all regions, researchers were a bit surprised at the length of time they are present in all areas. Fin, blue, and sei whales increased the time that they spent in northern latitudes after 2010, perhaps following prey. All but sei whales had a decreased acoustic presence on the Scotian Shelf after 2010. 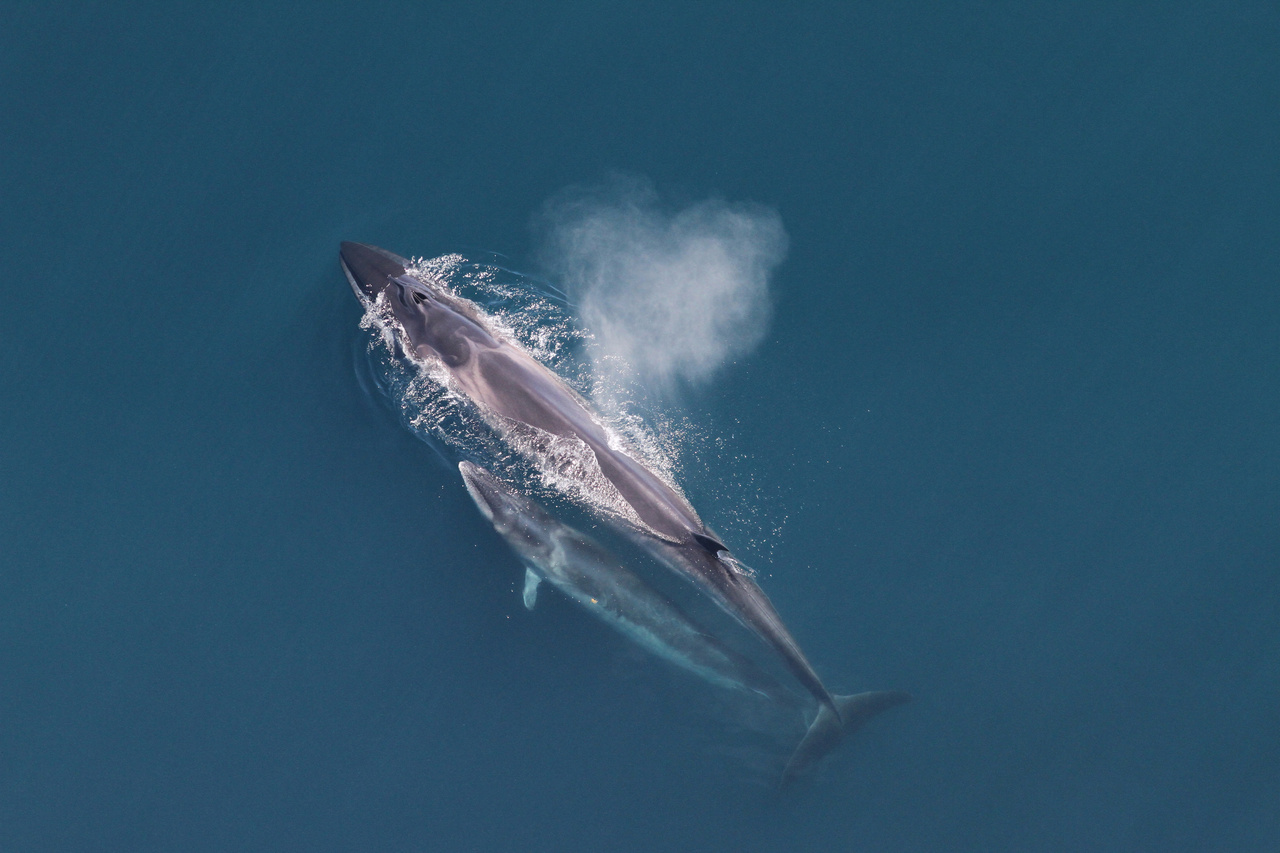 Sei whales, one of the least-studied baleen whales, were detected with the other whale species from Florida to eastern Greenland. Sei whales are found year-round in Southern New England and the New York Bight. These are also important regions for other baleen whale species, including North Atlantic right whales that target the same prey as sei whales.

“This study is the first comprehensive analysis of sei whale distribution throughout the western North Atlantic Ocean, including their movements and important habitat,” Davis said. “The southern limit of their range remains unknown, and their migratory movements in the western North Atlantic are still not well understood but we have filled in a number of information gaps.”

Fin whales were detected nearly year-round from Virginia to eastern Greenland. They are commonly found year-round in the Gulf of Maine and in Canadian waters off Nova Scotia. Acoustic records revealed their year-round presence in Massachusetts Bay and the New York Bight. New England waters provide feeding grounds, but mating and calving grounds are unknown. Their distribution year-round suggests that, like other baleen whales, not all fin whales migrate.

Blue whales are seen and heard year-round in and around the Gulf of St. Lawrence, where their population is well-studied. Considered a more northern whale, they have occasionally been sighted in the Gulf of Maine. Acoustic detections revealed blue whales are present as far south as North Carolina. 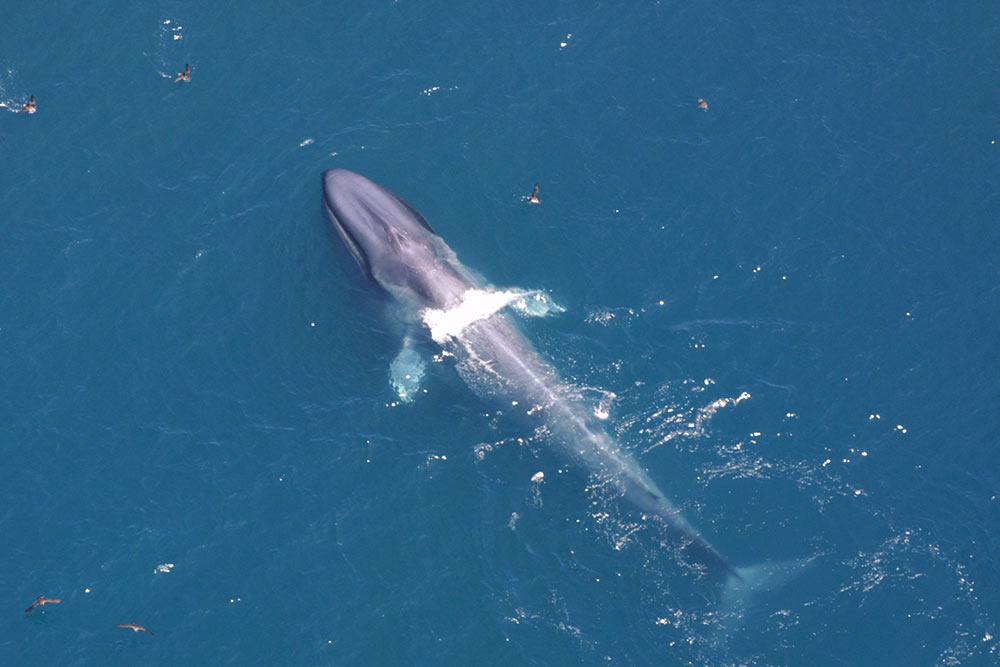 Blue whales, thought to be a more northern whale, were detected as far south as North Carolina. Photo: NOAA Fisheries

Blue whales tend to use deeper waters, making their seasonal movements difficult to study. Satellite tag studies, however, indicate they move from the Gulf of St. Lawrence to North Carolina, including on and off the continental shelf. They also move into deeper waters around the New England Seamounts -— a  chain of underwater extinct volcanoes that extends from Georges Bank southeast for about 700 miles. Researchers found the shelf break and canyons to be important habitat areas for blue whales.

“A decade of acoustic observations have shown important changes over the range of baleen whales and identified new habitats that will require further protection from human-induced threats like fixed fishing gear, shipping, and noise pollution,” said Davis.