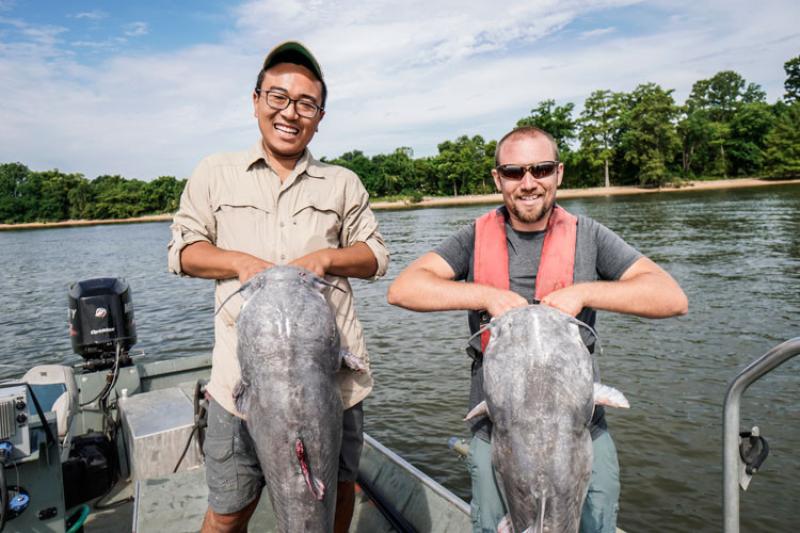 If you catch a catfish in Chesapeake Bay, there's a good chance it's an invader from the Mississippi River drainage—probably a blue catfish, though it could be a less common flathead catfish. While both fish are long-lived and fast-growing, it’s the blue catfish that is the major problem.

These catfish have done an excellent job of taking over the Chesapeake Bay area since they were introduced to the James, York, and Rappahannock Rivers during the 1970s-80s. Originally intended to establish a new recreational fishery in Virginia, these fish have been so successful that, in recent surveys of the tidal James and Rappahannock rivers, they made up 75 percent of the total fish biomass. In one hour of electrofishing, researchers caught more than 6,000 invasive catfish!

Blue catfish are voracious eaters--they consume other fish, crustaceans, and even other catfish. They out-compete the native species for both habitats and food. They eat the same plants, insects, fish, and blue crabs that native fish depend on, and then eat the native fish, too!

Says Tim Sughrue of Congressional Seafood Company, “These are not docile fish. They are apex predators just like sharks, but they reproduce like rabbits.”

And they can be massive—the largest one on record in Maryland was 84 pounds, while the largest in Virginia was 102 pounds. 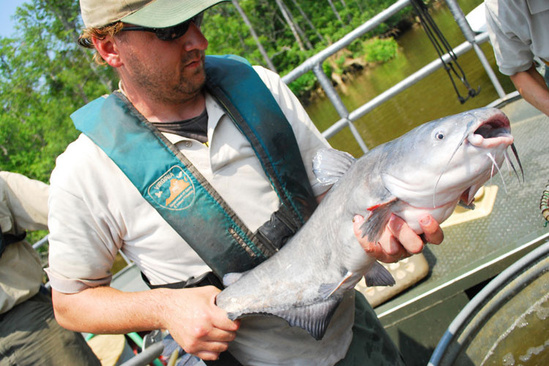 What We Know About Blue Catfish

The NOAA Chesapeake Bay Office (NCBO) and other Chesapeake Bay organizations identified invasive catfish as a challenge facing the Chesapeake ecosystem several years ago. To help scientists and resource managers learn more about these fish, NCBO provided more than $1 million in funding for research projects to investigate blue catfish.

At the November 2017 Invasive Catfish Symposium held at Virginia Commonwealth University’s Rice Rivers Center, researchers from Virginia Tech, Maryland DNR, and Smithsonian Environmental Research Center presented information on blue catfish diet, finding that blue catfish feed heavily on plants, invertebrates, and small fish when they are younger, but eat mainly fish as they get older and larger. Researchers from Virginia Institute of Marine Science found that blue catfish are highly tolerant to salinity, and that tolerance appears to increase with size. And, telemetry work by researchers at Smithsonian Environmental Research Center and Virginia Department of Game and Inland Fisheries demonstrated that blue catfish can be highly mobile and may move seasonally. Together, these studies suggest that blue catfish are capable of expanding their range even further.

NCBO also has been working with the Chesapeake Bay Program’s Sustainable Fisheries Goal Implementation Team—a group of representatives from federal agencies, state fisheries manager, and other stakeholders—to discuss how entities around the Bay can best to combat the problem.

Fishing is part of the solution. Commercial and recreational fisherman have been catching blue catfish for decades, mostly in the James River. The wild caught fishery for blue catfish has grown steadily in recent years, providing revenue for fishermen and the businesses that support them. Commercial blue catfish fishermen landed over 4.1 million pounds in 2016 up from just under 203,000 pounds in 2007. 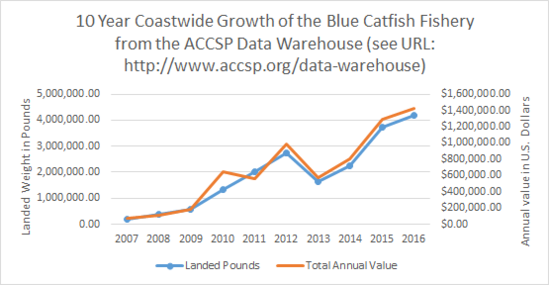 The good news is that blue catfish are delicious, and are now easy to find in restaurants and grocery stores in and around the Chesapeake Bay area. As more people find out how tasty blue catfish is--similar to striped bass or rockfish because it eats similar things--the number of places that sell blue catfish may grow.

Fishing for these blue cats helps the native fish and habitats, as well as the local economy—a win all the way around. 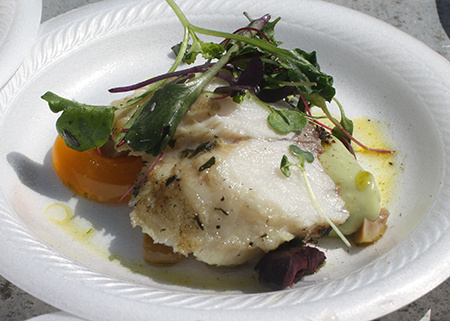 Blue catfish are here to stay. Left unchecked, they threaten native species, including endangered and commercially important species. The commercial and recreational fisheries are helping to control the population. NOAA Fisheries and our partners are supporting the development of these fisheries and working to identify further solutions to control the growth of this invasive population.

May we suggest some recipes?