Celebrating Our Work to Save Endangered Species

Join us in celebrating Endangered Species Day and learn more about our work to conserve and protect endangered species.

A green sea turtle and a Hawaiian monk seal rest on a beach, cuddled up to one another. Photo: Mark Sullivan/NOAA The Endangered Species Act was established to conserve threatened and endangered species and their ecosystems. At NOAA Fisheries, we work to protect, conserve, and recover our nation’s marine life under the ESA. The productivity of our oceans and coastal communities depends on the health and diversity of marine species.

Our marine species possess great cultural and economic value—they matter to our way of life. NOAA Fisheries and its partners are working to recover 165 marine species listed under the ESA.

Take a look at the info below to learn more about the many ways we work to ensure endangered species are around for future generations.

Central California Coast coho make up the southern-most population of salmon in the United States, inhabiting rivers and streams north and south of San Francisco Bay. These fish are in danger of extinction, but efforts are underway to bring them back.

Endangered and threatened species are important to our nation and its people in many ways, and protecting and conserving them is central to our mission. In honor of Endangered Species Day, read the interview with Donna Wieting, Director of NOAA Fisheries Office of Protected Resources, to learn about our important work.

Read the interview about endangered species

Meet the Experts Working to Save Endangered Species

Allison Henry is a fisheries biologist with the large whale team at the NOAA Northeast Fisheries Science Center. She flies in a plane over the Gulf of Maine collecting critical population data about the North Atlantic right whale. 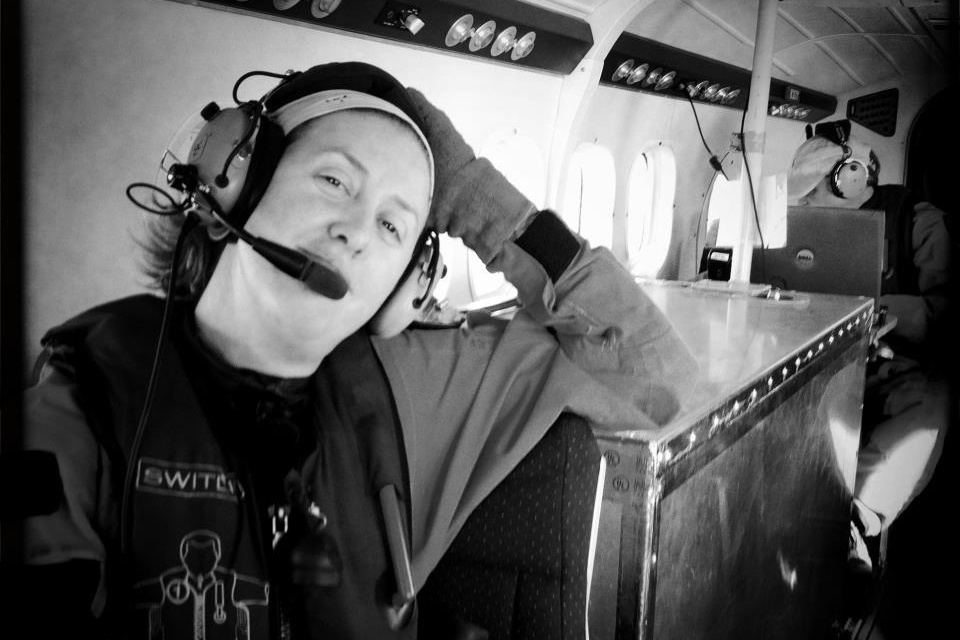 Jonathan Molineaux is a fisheries biologist and winner of the 2020 Science Spectrum Trailblazer Award, part of the Black Engineer of the Year Award STEM Conference. He explains how his interest in endangered species conservation began at a local pond and led to the ocean. 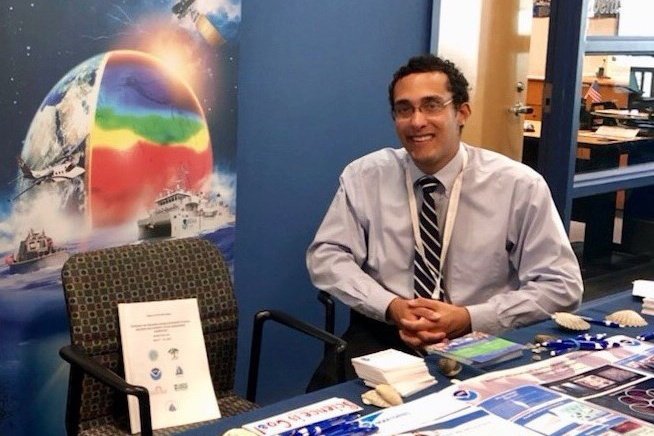 Meet the Team Putting Endangered Species on the Map 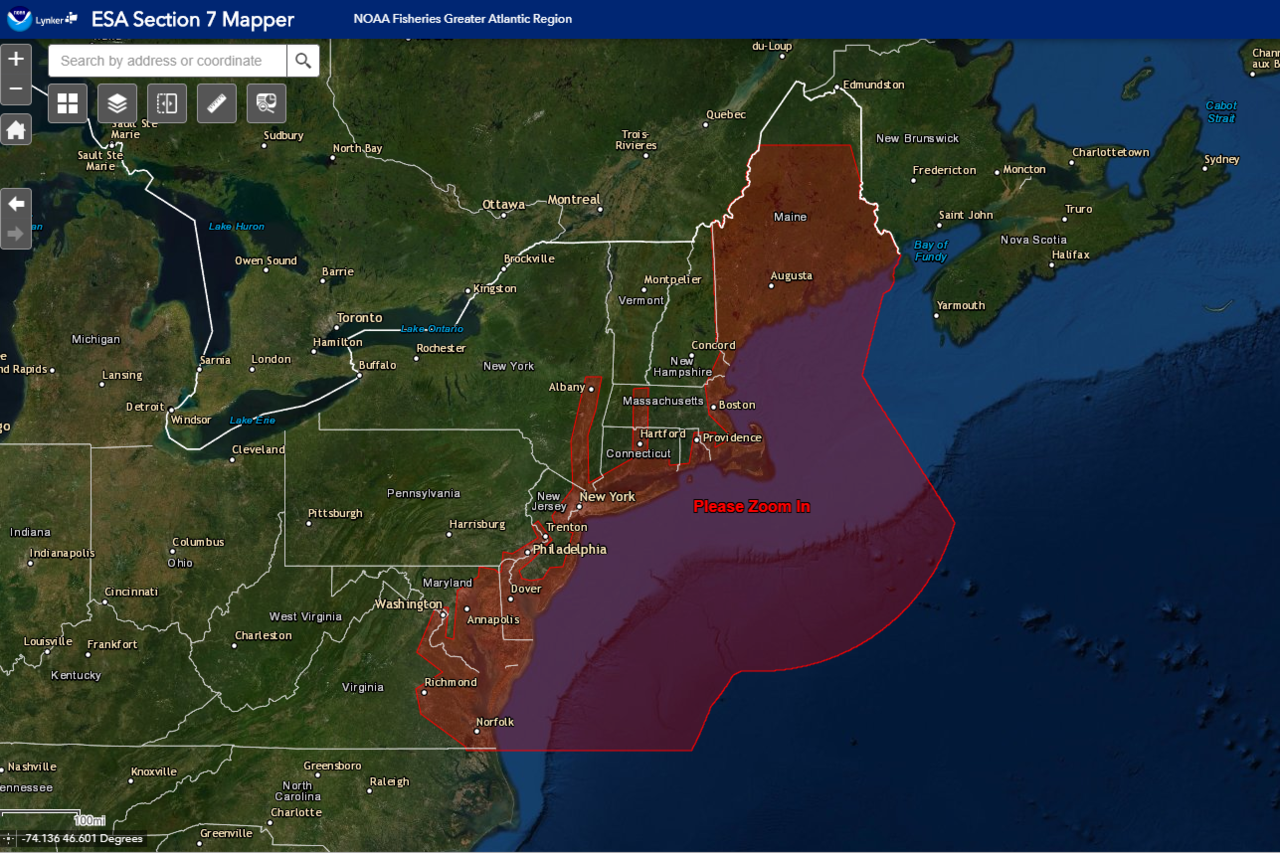 Of all the species NOAA Fisheries protects under the Endangered Species Act, we are shining a spotlight on nine species that are among the most at risk of extinction. For some species, numbers are so low they need to be bred in captivity. Others are facing human conflicts, like bycatch in fisheries, habitat destruction, vessel traffic, entanglements, ocean noise, and development. We are taking action to stabilize these species, and bring them back from the brink.

Learn more about NOAA Fisheries Species in the Spotlight 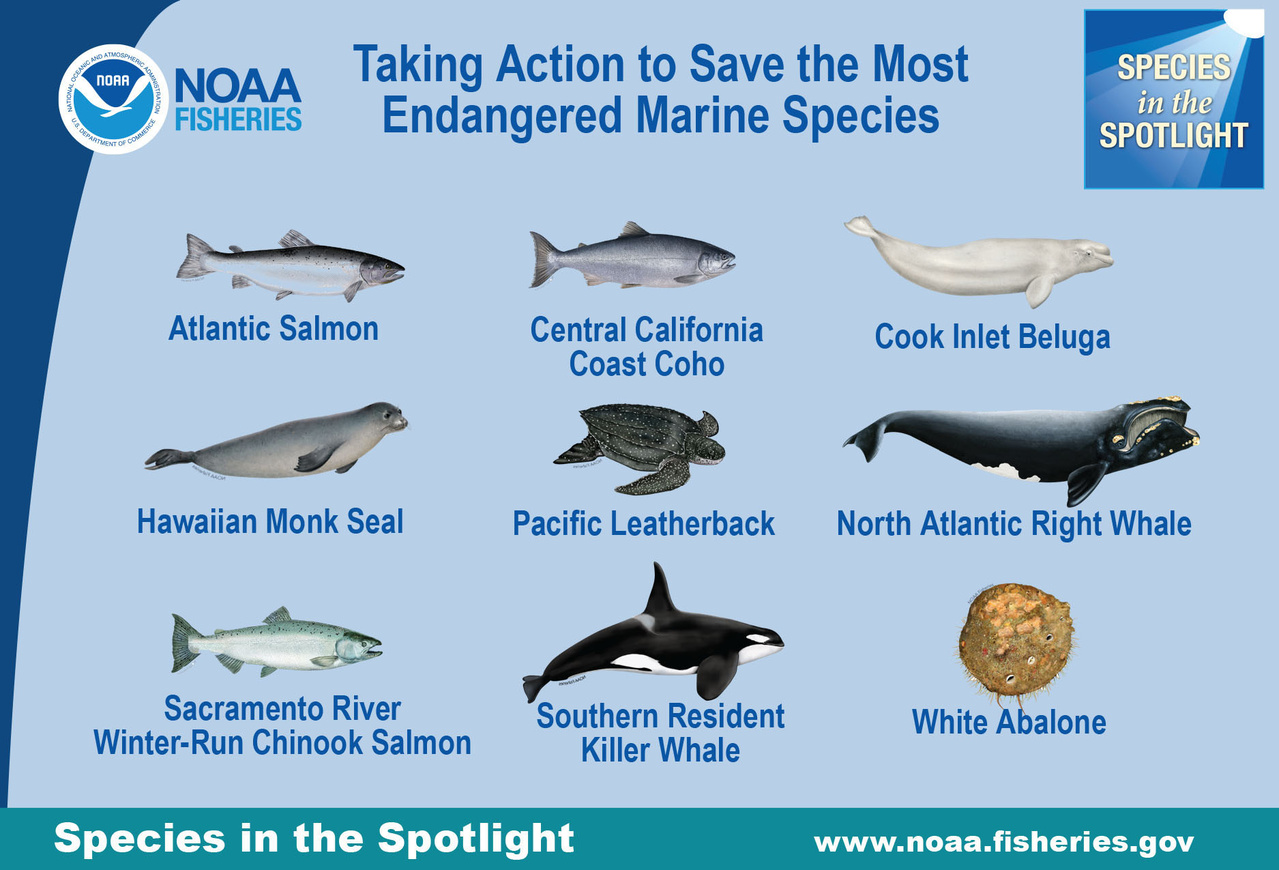 We know we cannot save species alone. We are grateful for our various partners who support and implement our programs. Conservation groups, academia, tribal nations, and federal, state, territorial, and local governments all make important contributions to the protection and recovery of endangered and threatened species. We work with these organizations in many ways to minimize harmful effects on listed species and work toward their recovery. Our work with partners includes regularly reviewing and recommending activities to help reduce threats to a listed species, entering into agreements to proactively conserve species before they need listing under the Endangered Species Act, providing grants to support species recovery, and developing and implementing conservation strategies under species recovery plans. We rely on a national network of partners who respond, investigate, and collect valuable data about stranded marine mammals and sea turtles that are sometimes listed as endangered or threatened. Stranding networks have been established in every coastal state and are largely volunteer. Through a national coordinator and regional coordinators, NOAA Fisheries oversees, coordinates, and authorizes these activities and trains personnel.

Saving Endangered Species? There’s a Patch for That!

We partnered with the Girl Scouts to highlight our programs and scientific expertise and to reach diverse, new audiences, including the next generation of conservationists.

Learn how we assisted with the Endangered Species Patch Program development

Learn more about how to earn the Endangered Species Patch online 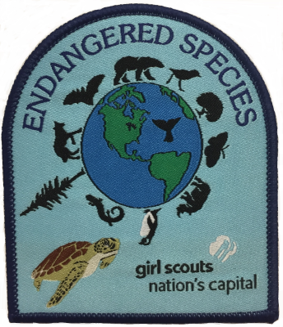 What You Can Do to Save Species Last updated by Office of Communications on May 14, 2020