Both tag requests and number of recaptured sharks increase in 2020. 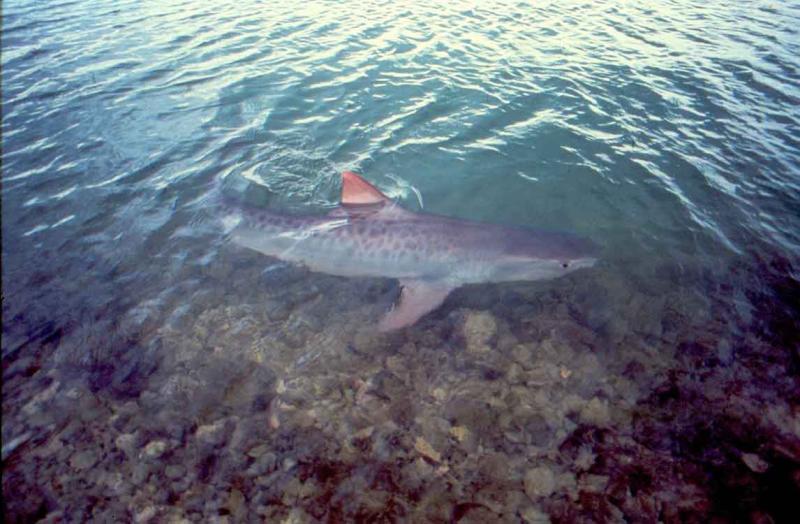 A tiger shark swims near the ocean surface.

Despite the many lifestyle changes brought on by the COVID-19 pandemic, commercial fishermen are still out there making a living. Recreational anglers are still fishing, and more people are spending time outside and on the water. The Northeast Fisheries Science Center’s Cooperative Shark Tagging Program experienced increased interest this year from new volunteers, with more requests for tags from active taggers, and higher numbers of recaptures reported.

“The ocean wasn’t closed by the pandemic,” said Cami McCandless, a research fishery biologist and lead of the Apex Predators Program at the center’s Narragansett Laboratory in Rhode Island. “We started noticing an increase in tag requests and new volunteers in May, as the weather warmed and the pandemic wore on. People wanted to get outside. Volunteers from both commercial and recreational fisheries increased participation in our tagging program this year, leading to a 7 percent increase from 2019 in the number of requests for tags from May through September.”

In addition, reports from commercial fishers and recreational anglers on recaptured sharks increased by 25 percent over last year based solely on email and online reporting. That’s an impressive increase considering the program’s website and online reporting forms had changed from a year ago.

The Cooperative Shark Tagging Program is the oldest citizen science program in NOAA Fisheries. It began in 1962 with fewer than 100 volunteer taggers. It is a collaborative effort between recreational anglers, the commercial fishing industry, and NOAA Fisheries to learn more about the life history of Atlantic sharks.

The program now includes thousands of participants throughout the North Atlantic Ocean, including the Gulf of Mexico and the Mediterranean Sea. They have tagged more than 300,000 sharks representing more than 50 species.  More than 18,000 sharks have been recaptured, providing movement data on more than 30 species. These data have provided the basis for defining essential fish habitat for federally managed shark species in the Atlantic. New data from the program update these designations regularly. An atlas of tagging and recapture information from the Cooperative Shark Tagging Program was published in 2019.

“The original objective of this program was to document the distribution and movements of Atlantic sharks, while promoting conservation through catch and release,” McCandless noted. “However, given the long-term, continuous time series, this program has become instrumental in shaping not only what we know about shark migration and distribution, but in defining stock structure, documenting longevity, and validating age and growth in several species, all information essential for stock assessment and effective management.”

Recreational tournament sampling and two of the Apex Predator Program’s major surveys were cancelled in 2020 due to the pandemic. However, active participation in the Cooperative Shark Tagging Program continued to produce data. The researchers have also focused on life history studies and other projects.

“Since we could not do field work this year, we have been able to work on other collaborative projects, such as combining our conventional tagging data with long-term environmental, fishery-independent survey, and/or satellite telemetry data. These efforts are revealing migratory cues, detailed migratory routes, and, in some cases, decadal shifts in seasonal distribution related to changes in population abundance and/or ocean warming,” said McCandless.

Having the increased recapture data from the tagging program has helped move research forward, and yielded the occasional unexpected sample. A recent call about a porbeagle shark washed up on a beach in Marblehead, Massachusetts led to a 2 a.m. recovery of the dead animal for research.

Kate Zewinski works with McCandless in the Apex Predators Program. She enrolls new members, issues tags, and handles recapture reports. She has kept up with requests despite having limited access to the laboratory due to COVID protocols and safety precautions.

“The recapture data takes a while to process,” Zewinski notes. “Tags are used throughout the season. This year we are getting a lot of recapture information back, which is really helpful to our life history studies since there is not a lot of information about some shark species.”

May through September are the prime months for taggers, but data comes into the lab online, by email, or by phone (877-826-2612) year round. Even though the program covers the North Atlantic, it is managed from the Northeast U.S. Some shark species, like spiny dogfish, blue sharks and porbeagle sharks, can be found there throughout the year. The majority of species found along the East Coast occur only seasonally, and travel to warmer waters further south or move offshore for the winter.

While Florida is always a hot spot for taggers, increased interest this year came from North Carolina up through New York and even internationally, McCandless said.  “Some taggers cannot get out on the water some years so they are not active, but in another year they are very active. It varies. We are happy to have more citizen scientists working with us this year. Many shark populations are improving but are not fully recovered, and the data the taggers provide are important to our efforts to learn more about a number of species.”