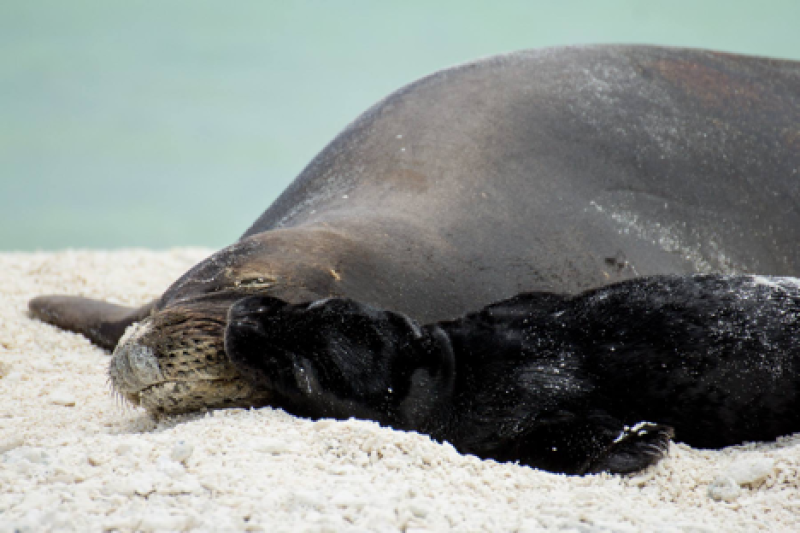 A Hawaiian monk seal mother and pup nuzzle on the beach. Pup production is one of the key factors in population recovery of the endangered Hawaiian seal.

A group of NOAA scientists has published a new paper in Marine Mammal Science that improves their estimations of reproductive rates in Hawaiian monk seals. They couldn’t have done it without the help of citizen scientists reporting monk seal sightings. NOAA relies on public reports to collect data on seals in the main Hawaiian Islands. It would be impossible to consistently survey all of the beaches along 750 miles of inhabited shoreline.

Hawaiian monk seals are among the world’s most endangered marine mammals, with only around 1,400 remaining. Most of the population (about 1,100 seals) inhabit the remote Northwestern Hawaiian Islands. The remainder (about 300 seals) live in the heavily populated main Hawaiian Islands. The monk seal has recently shown positive population trends in these islands. At the core of these encouraging data is the number of pups born each year.

Hawaiian monk seals have pups throughout the year. NOAA sends teams of biologists to the Papahānaumokuākeakea Marine National Monument every year to count the monk seal population. And while the main Hawaiian Islands are densely populated with humans, monk seals often select secluded beaches for pupping. This makes it hard to know when and where to look, so it’s easy to miss some. And since we don’t always witness their birth, we don’t see or identify many of those seals until they are adults. That makes it difficult to estimate their age when they have pups of their own.

Public participation in monk seal monitoring vastly extends the coverage that agency biologists can accomplish alone. It also engages the community in stewardship of natural resources in Hawaiʻi. For example, with so many things shut down in 2020, NOAA biologists weren’t able to survey monk seals in the Northwestern Hawaiian Islands. However, our information flow in the main Hawaiian Islands remained strong thanks to citizen scientists.

You can add to our data set by reporting your own monk seals sightings to the state-wide hotline at (888) 256-9840! Keep in mind, there is no need to approach a monk seal to make a report—always keep a safe distance from wildlife.

Thanks to these efforts, the newly published research describes the reproductive cycle and estimates reproductive rates of female Hawaiian monk seals in the main Hawaiian Islands.

Female Hawaiian monk seals have some distinct events in their breeding cycle, like the interval between pups, the nursing period, the molting period. The timing between pups is consistently just more than a year (an average 382 days). Because the interval between pups is more than a year, if a seal pups consecutively, then she molts a little later each year. If she doesn’t pup one year, she molts a little earlier. This helps create the tell-tale patterns we observed.

Knowing about these patterns allows us to identify when a seal might have given birth and nursed her pup in an unmonitored area, even with imperfect sighting records. We plotted female monk seal sighting histories and used these patterns to code pupping in each year for each female seal:

1)  Pup observed – the female was observed with a nursing pup.

2)  Pup ruled out – sighting reports were sufficient to say that a female could not have given birth and nursed a pup without detection.

3) Pup inferred – the year-to-year pattern of observed nursing or molting suggests that a pupping event took place during a noted sighting gap.

4) Pup status unknown– not enough sightings to confirm or rule out a pup.

From 1962 to 2017, observers reported 55 mothers with 245 pups. But with our new analysis—thanks to sightings reported by citizen scientists—we could estimate more pups based on the sighting patterns. We were able to add up to 24 percent more pups. Some females (for example, R303) would never have been considered mothers if not for the pups we inferred from the timing between our sightings.

Our research showed that the population is healthy and growing, and not limited by the amount of prey available. The graph below shows how adding code 3 (inferred) or code 4 (status unknown) pups to our counts increases our estimates of female reproductive rates in the main Hawaiian Islands. Using all the information provided by citizen scientists, we estimated these female seals have higher birth rates than in the Northwestern Hawaiian Islands.

Despite the encouraging findings of this study, human-related threats are still slowing population recovery. Threats include intentional killings, hookings or drowning in fishing nets, and toxoplasmosis.  Everyone can do their part to coexist with monk seals, like keeping their cats indoors to reduce the risk of disease, and always reporting fishing interactions with seals to (888) 256-9840.