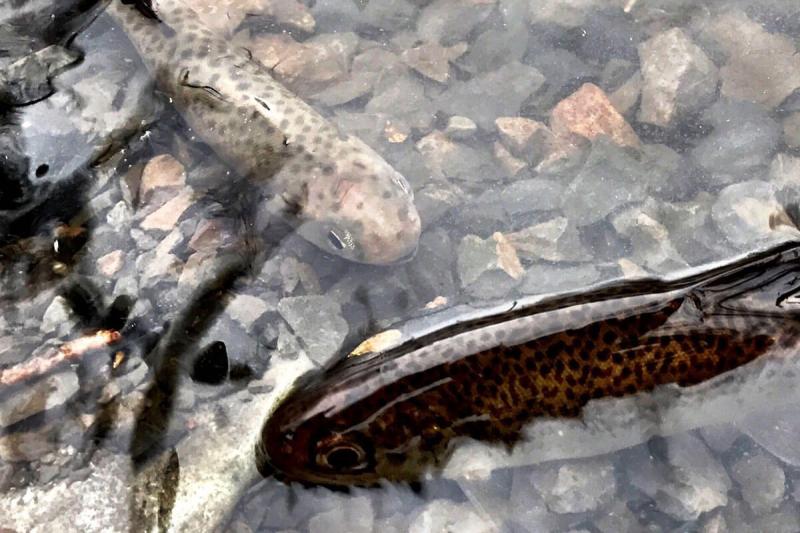 Coho salmon are swimming in Oregon’s Grande Ronde River Basin for the first time in decades following the release of 500,000 juvenile coho in the Lostine River, a tributary of the Grande Ronde, by the Nez Perce Tribe and the Oregon Department of Fish and Wildlife.

The release on March 9, 2017, continued efforts by the Nez Perce and other tribes to rebuild naturally spawning populations of coho throughout the Columbia Basin that will support tribal and non-tribal fisheries. The revival of coho is expected to provide cultural and economic benefits for the Tribe as well as rural Oregon communities.

“It is a great honor to be able to witness the first steps in reintroducing coho salmon -- ‘cuhlii’ as they are known to the Nez Perce people -- back to an area where they have been absent for far too long,” said Mary Jane Miles, Chairman of the Nez Perce Tribal Executive Committee, in describing the release. “The Tribe has worked towards this day for almost 30 years and it is wonderful to see the fruits of that labor become a reality.”

Some 20,000 adult coho once returned annually to the Grande Ronde Basin. The loss of habitat, dam construction, overfishing, and other factors contributed to the species’ disappearance.

The Nez Perce Tribe began planning for the coho reintroduction as early as 1988 with funding from the Bonneville Power Administration. The Pacific Coastal Salmon Recovery Fund and the Mitchell Act, both administered by NOAA Fisheries, provided continuing financial support. The Mitchell Act provides funding for programs that help offset the impacts of federal dams on fish populations.

“This major milestone demonstrates how much we can do for fish, and the communities that depend on them, when we work together,” said Rob Jones, who leads the Anadromous Production and Inland Fisheries branch in NOAA Fisheries’ West Coast Region. “Bringing back coho will also bring back the cultural and economic benefits of productive fisheries for the Tribe and many others.”

The juvenile fish released into the Lostine River in the Wallowa Valley of Eastern Oregon will migrate downstream to the ocean, and will begin returning to the river as adults in the fall of 2018. Releases will continue in coming years with the goal of establishing a self-sustaining population.

The Nez Perce Tribe previously reintroduced coho to the Clearwater River in Idaho, and the Yakama Nation reintroduced the fish to rivers in the mid and upper Columbia. The efforts demonstrate that fish hatcheries can play an important conservation role by reviving and rebuilding naturally spawning populations that support treaty and non-treaty fisheries. A similar conservation hatchery program has rebuilt endangered Snake River sockeye salmon numbers to the point the fish are once again spawning naturally in Idaho’s Redfish Lake.

“I would like to thank the Tribal staff that have worked on this project over the years for their dedication and commitment to preserving and protecting the culture and traditions of the Nimiipuu,” Miles said. “I believe these efforts will help realize a future that includes a species that is an integral part of this region and the Nez Perce culture.”

“I would also like to thank the Oregon Department of Fish and Wildlife, the Confederated Tribes of the Umatilla Indian Reservation, NOAA Fisheries, the Bonneville Power Administration, and Wallowa County and the local landowners for their support and assistance of this program,” Miles added. “Without them it would not be possible.”