The volume, which highlights bocaccio and yelloweye rockfish as ecological building blocks, is now available to regional schools. 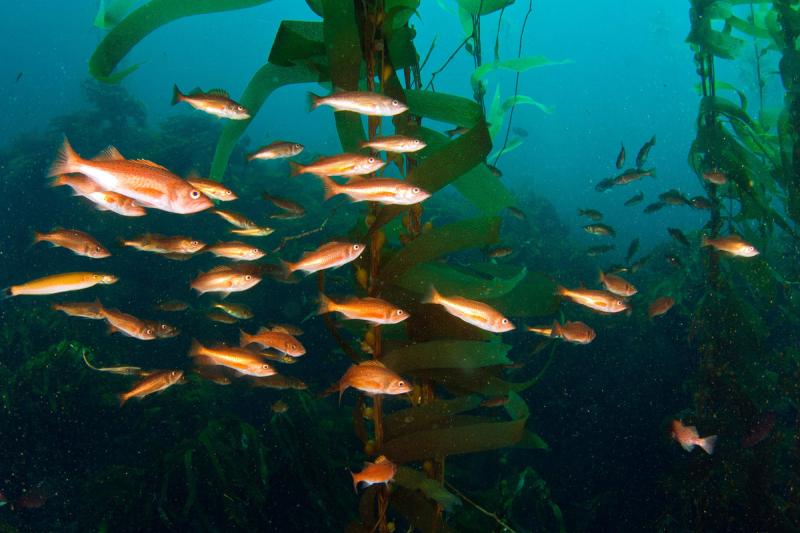 Threatened and endangered rockfish are swimming out of the depths of Puget Sound and into classrooms through a colorful new book. It engages students in the curious and fascinating lives of these charismatic species.

The fully illustrated, 30-page book is free to schools in the Puget Sound region. The companion curriculum explains the prominent role of rockfish in the marine ecosystem throughout their distinct life stages. It highlights endangered bocaccio and threatened yelloweye rockfish which were listed under the Endangered Species Act in 2010. They are some of the longest-lived fish in the ocean that may live to nearly 150 years old!

“Rockfish may not be the most obvious focus of a book for kids, but they are some of the most interesting species in the region and this book is a masterpiece in telling that story,” said Dan Tonnes. Tonnes was NOAA Fisheries’ recovery coordinator for rockfish in Puget Sound for many years.

The book was born from the promise of improved stewardship of the fish, which was the focus of research by Jennifer Sawchuk of the University of Washington. She surveyed anglers across Puget Sound. She found that the more they know about rockfish biology, the more likely they are to support conservation measures to help protect and recover the fish.

Engaging the Next Generation

Sawchuk’s finding led to years of outreach efforts, such as:

Many of these efforts targeted students, who will become the next generation of anglers, divers, and scientists. The book became the centerpiece of the effort to reach, engage, and inform younger students from kindergarten to sixth grade.

“Connecting youth in the region to long-term recovery efforts for a species they aren’t likely to encounter very often is difficult. There was a real need for a vehicle to do so, and a confluence of factors came together in support of the book,” said Dayv Lowry, who recently took over from Tonnes as rockfish recovery coordinator.

Tonnes identified author and artist Claudia Makeyev as a strong candidate to develop the book, and a partnership was born. She worked with NOAA Fisheries to make the book an educational reality. She is also a marine biologist who studied West Coast rockfish at NOAA Fisheries’ Southwest Fisheries Science Center. Makeyev had both the science knowledge and artistic ability to tell the rockfish story. She wove the biological details with colorful drawings and personal touches including engaging tales of mermaids and sea stars to draw students into the story.

“As a tried-and-true fish nerd, this is the book I wish I had as a kid,” Makeyev said. “It’s science, and fish, and some fun, and it’s all wrapped up together.”

Makeyev’s work toward her master’s degree examined marine protected areas. She later worked with NOAA Fisheries scientists Mary Yoklavich and Jan Mason at SWFSC’s laboratory in Santa Cruz. For example, she helped Mason analyze West Coast groundfish landings to assess the effectiveness of Rockfish Conservation Areas. These areas were established to help rebuild the species after many rockfish species collapsed off the West Coast.

Many rockfish populations have turned out to be more resilient than expected. Many have recovered from depressed levels much faster than predicted once managers adopted protections to conserve the species. Support for progressive fisheries management depends on the public understanding and appreciating such successes.

To get the drawings of underwater scenes just right, Makeyev reviewed underwater footage. It was taken from small remotely operated vehicles used to survey rockfish habitat, including kelp environments where juvenile rockfish find refuge. She also studied photos of tiny larval rockfish, which provide food for many juvenile fish species including salmon and steelhead. That helped her accurately depict the ecological role of the species, a building block in the foundation of the food web that feeds many economically important species.

The book weaves the unique role of rockfish with ecological concepts such as:

Together, these elements tell the story of the species and their environment. These colorful examples and companion lessons help teachers bring concepts of scientific data collection, ecological connectivity, and responsible management of fishery resources to life. 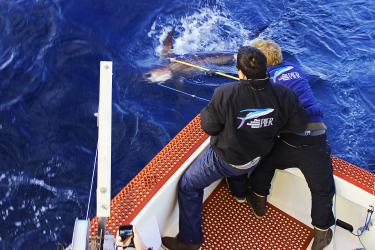 Tagging of swordfish off Southern California funded by NOAA Fisheries found that they spend daytime hours an average of almost 900 feet below the surface, where few other fish species venture. Deep-set buoy gear rapidly sinks bait to those depths where it catches swordfish and little else. Credit: Pfleger Institute of Environmental Research
More News