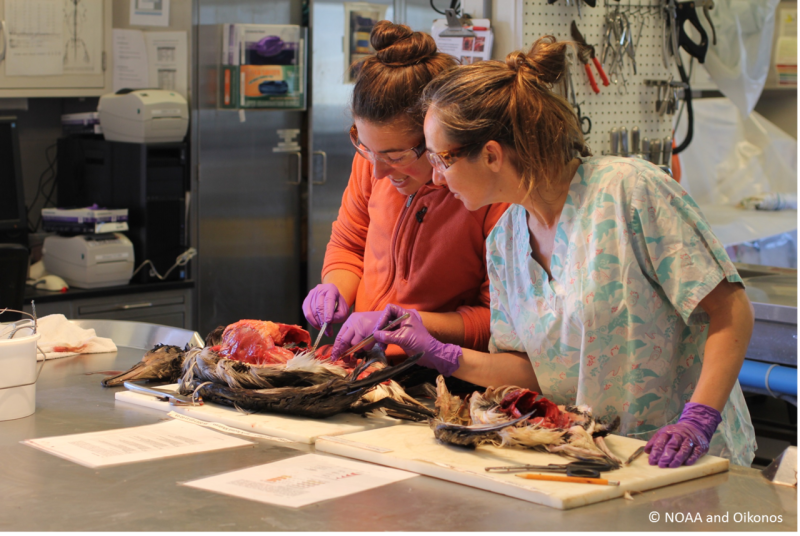 Sometimes during regular fishing operations, seabirds accidentally get caught in fishing gear, resulting in injury or death. While this occurrence (also known as bycatch) is unfortunate, it does provide an opportunity to monitor seabird population characteristics and trends over time.

What Information Do We Retrieve from Seabird Bycatch Carcasses?

From September 2017 to August 2018, Oikonos sampled a total of 206 seabird carcasses. Scientists and volunteers worked together to:

Analysts also carefully measure the quantity of plastic ingested by seabirds in order to investigate trends related to the harmful impacts of plastic pollution in the North Pacific Ocean.

How Do Managers Use This Information?

Scientists and managers use age, sex, and health data from multiple years of deceased birds to identify trends indicative of population status. Necropsies also allow scientists to see how bird populations are responding to stressors such as oil spills, disease, and environmental changes. Regional and species differences in age and sex distributions can be documented and used to understand which groups of seabirds are most vulnerable to fisheries bycatch.

For example, from September 2017 to August 2018, adult black-footed albatrosses caught in Hawaii were mostly females, while more adult males were caught in Alaska. Most seabirds that were captured in both the Alaska and Hawaii fisheries were adults. Adult mortalities can slow population growth more than mortality of juveniles that are not yet able to reproduce.

Last updated by Office of Science and Technology on March 25, 2019