Fisheries and biomedical researchers collaborate to find out if cancer cures are living on Alaska’s seafloor. 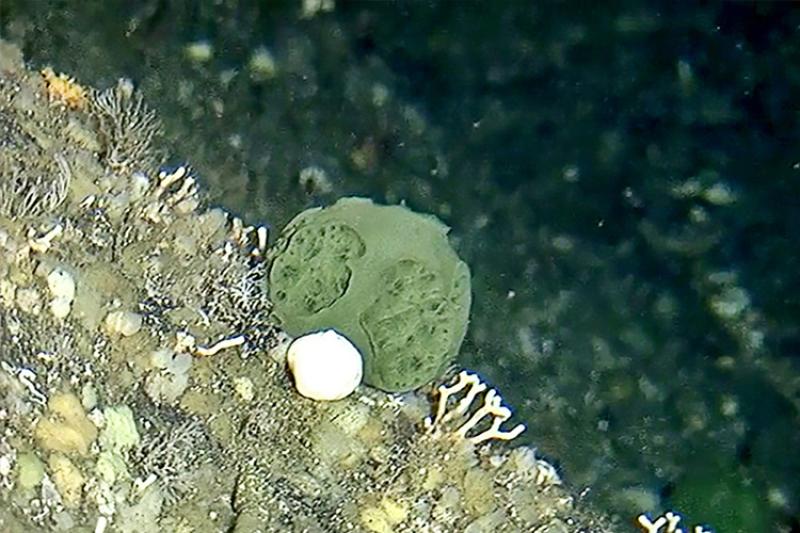 Compared to its dazzling deep-sea coral neighbors, the green Latrunculia austini sponge is pretty drab. Dotted with craters and pitted by deep holes the golf-ball sized sponge is curious-looking rather than beautiful. But green Latrunculia’s unique chemical composition holds a promise much greater than mere beauty.

It was discovered at the bottom of Alaska’s frigid North Pacific Ocean during a NOAA Fisheries research mission in 2005. The mission was straightforward: study bottom-dwelling sea life and habitats supporting Alaska’s $1.8 billion fishing industry. However, in the years since, the small sponge has attracted the attention of multidisciplinary scientists from around the globe. In lab tests, several of Latrunculia austini’s molecules selectively target and kill pancreatic tumor cells, according to biomedical researchers at the Hollings Cancer Center at the Medical University of South Carolina and at the Henry Ford Cancer Institute in Detroit.

“You’d never look at this sponge and think this is a miracle sponge, but it could be,” said Bob Stone, a researcher at NOAA Fisheries’ Alaska Fisheries Science Center. He was the first to discover the sponge in Alaska while operating from a submersible on the North Pacific’s seafloor. His work soon had further reach because of a special collaboration.

By the time Stone found the sponge, his groundbreaking research in Alaska had already intrigued leading biomedical researcher Mark Hamann, the Charles and Carol Cooper SmartState Endowed Chair at the Medical University of South Carolina. Hamann has studied marine life to develop drug leads for more than 20 years. While Hamann explores the ocean in search of rare natural compounds, he also constantly monitors publications for other scientists’ discoveries, which led him to Stone.

After the green sponge was discovered, it quickly became a focal point of this global collaboration. Stone and Hamann worked with Michelle Kelly, to name and identify Latrunculia austini. Kelly is a world expert on sponges and works at the National Institute of Water and Atmospheric Research in New Zealand.

Meanwhile, Hamann and his team determined that the sponge “covers unique and unprecedented chemical space. The structures of the molecules are not related to anything you would find on land or even in tropical shallow-water marine environments.” 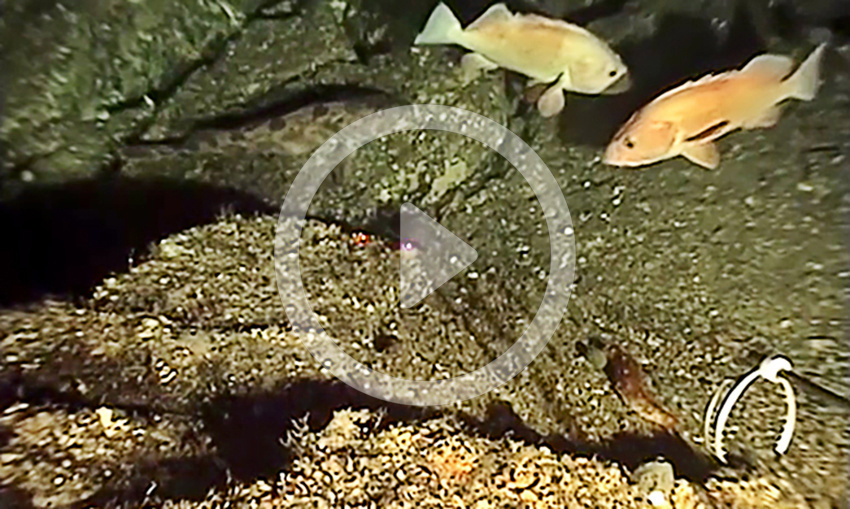 Hamann sent samples of the molecules to researcher Fred Valeriote, senior researcher with the Henry Ford Cancer Institute. Scientists there are doing cutting-edge cancer research and grow tumor cells, allowing them to study the cells and test new drug leads in a controlled environment.

“On average, less than one in 100 sponge extracts will present the anti-cancer activity that we observed with the green sponge in our lab. It’s a promising initial step forward in developing new treatments for pancreatic cancer,” said Valeriote. “Given the lack of current effective drug treatments available for pancreatic cancer, this study finding offers hope for the future of cancer care.”

He explained that pancreatic and ovarian cancers are generally slow-growing tumors. He said late detection is one reason why these cancers are so deadly, but another factor is that chemotherapy is not effective against slow-growing tumors. As a result, even in its earliest stage, the five-year survival rate for the most common type of pancreatic cancer is about 14 percent, according to the American Cancer Society.

That’s why the green sponge, with its unique discorhabdin compounds, is so exciting to researchers. “This is absolutely the most active molecule against pancreatic cancer that we have ever seen. Although a significant amount of work remains, this type of activity and selectivity is the key first step in the discovery and drug development process,” Hamann said.

To understand how sponges survive is to better understand why green sponges create such complex chemicals. Sponges typically can’t move. They can’t flee or strike out at would-be predators. Instead, they create chemicals to ward them off, and to adapt to extreme habitats. In the ocean, they’re not alone. More than 12,000 chemical compounds not found in any other living thing have been isolated from marine life that most people pay little attention to.

Hamann and Valeriote aren’t like most people. They develop drug leads to treat diseases and look to the oceans for new therapies. This has already led to life-saving medicines. “Of the eight most frequently prescribed products to treat cancer, half are natural products,” Hamann said.

Even with such potential, developing green sponges as a possible cancer treatment has proven difficult.

While green Latrunculia’s unique molecules may be due in part to their unusual growing conditions in cold, dark depths, that also means they live in difficult to reach and often dangerous locations. In Alaska, some live as deep as 720 feet.

Green sponges strongly adhere themselves to rocky surfaces making them “one of the hardest sponges to collect,” according to Stone. Another issue, green sponges are small. Stone estimates it takes about 80 to yield a single kilogram. In short, collection is not only potentially dangerous but also difficult and time consuming.

Scientists at the University of Hawaii are working to synthesize the green sponge’s molecules. Synthesizing naturally-derived drugs is normally attempted after a drug proves its effectiveness because the work is challenging and expensive. But because there are hurdles to obtaining the green sponge in nature researchers are working toward synthesizing its molecules now. Until then, harvesting green sponges from Alaska where they are the most abundant is the best way to study and test its compounds.

Stone’s previous studies, in his role at the Alaska Fisheries Science Center and with the NOAA Fisheries Deep Sea Coral Research and Technology Program, means he’s already done a lot of the work to address these issues.

After trial and error, he and colleagues at Pelagic Research Services perfected a way to remove green sponges efficiently and with little disturbance by using a robotic arm with a Venturi dredge, which works like a vacuum hose. And he discovered that green sponges live in large patches in the eastern Gulf of Alaska, where they can be taken without affecting the ecosystem or commercial fish populations.

Despite the hurdles, the scientists remain dedicated to the green sponge’s potential. “For pancreatic cancer this is absolutely the best lead that we have,” Hamann said. Hamann and Valeriote’s findings fuel Stone’s continued commitment because, “Who among us hasn't lost someone to cancer?” 

Latrunculia austini was discovered little more than 10 years ago. When scientists explore the deep ocean they often find something no one has ever seen. And it’s not surprising considering only five percent of world oceans have been explored. Every new discovery has added to our knowledge of fishing productivity. But an unassuming green sponge might prove the benefits are greater than anyone could’ve imagined.