Unmanned wind-powered vehicles go farther for longer to expand our knowledge of the ocean. 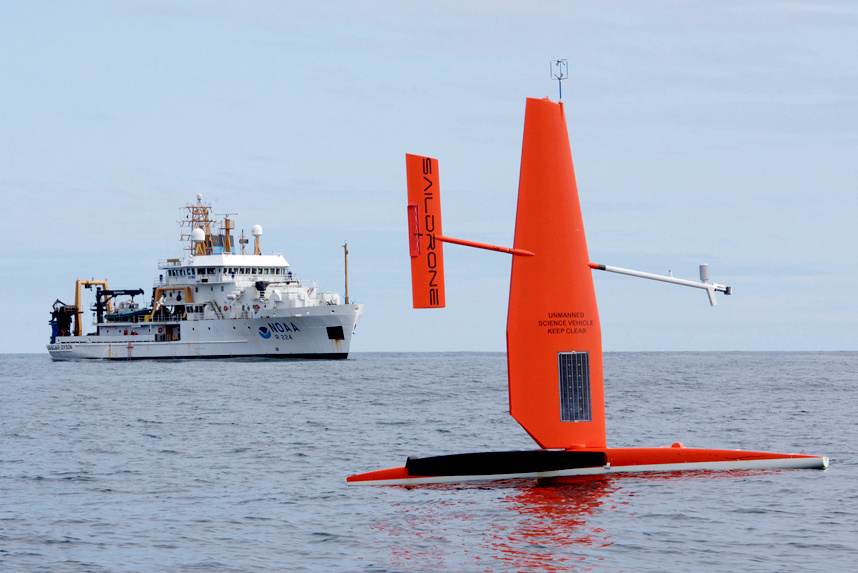 An earlier generation saildrone in the Bering Sea with the NOAA research ship Oscar Dyson.

The ocean is vast, and fish swim.

These are challenges for scientists who need to find out when, where, and how many, fish are found in Alaska’s marine waters. They also want to know which species and what ages are found there—all information essential to managing Alaska’s valuable commercial fisheries sustainably.

“This opens a window in time and space that we didn’t have using ships alone,” said Alex De Robertis, the NOAA Alaska Fisheries Science Center scientist who led the study. “Ship-based surveys are limited because they are short, and mostly done in summer—we don’t know what happens the rest of the time. Our results show that oceangoing robots such as saildrones now make autonomous long-term acoustic measurements possible.”

Manned research vessels and oceangoing robots each have strengths and limitations. Together, they can accomplish much more than either alone.

Ship-based acoustic-trawl surveys combine acoustic measurements with trawl sampling. This allows scientists to identify and measure fish and collect other vital biological data for stock assessments. “Acoustic instruments basically just see a swim bladder, not what fish it’s in,” De Robertis explained. “But ships are expensive, and can cover only so much sea.”

Unmanned surface vehicles cannot collect trawl samples, and therefore cannot identify or measure the fish seen by the fish finder. But robots cost less to deploy than manned vessels, and they have endurance: powered by wind and sun, they can go farther for longer.

Unless there are major developments in identifying and sizing fish with acoustics, ship-based surveys using trawls will remain fundamental to estimating species abundance for fisheries management,” said De Robertis. “Unmanned surface vehicles can enhance research vessel surveys, not replace them.”

De Robertis also cautions that for this reason oceangoing robots may be less useful for acoustic estimates of fish abundances in lower latitude, higher-diversity environments.“Saildrone surveys work best in fish communities dominated by single species, as is the case in many high latitude environments,” De Robertis said. “They are ideal for work in Alaska.” 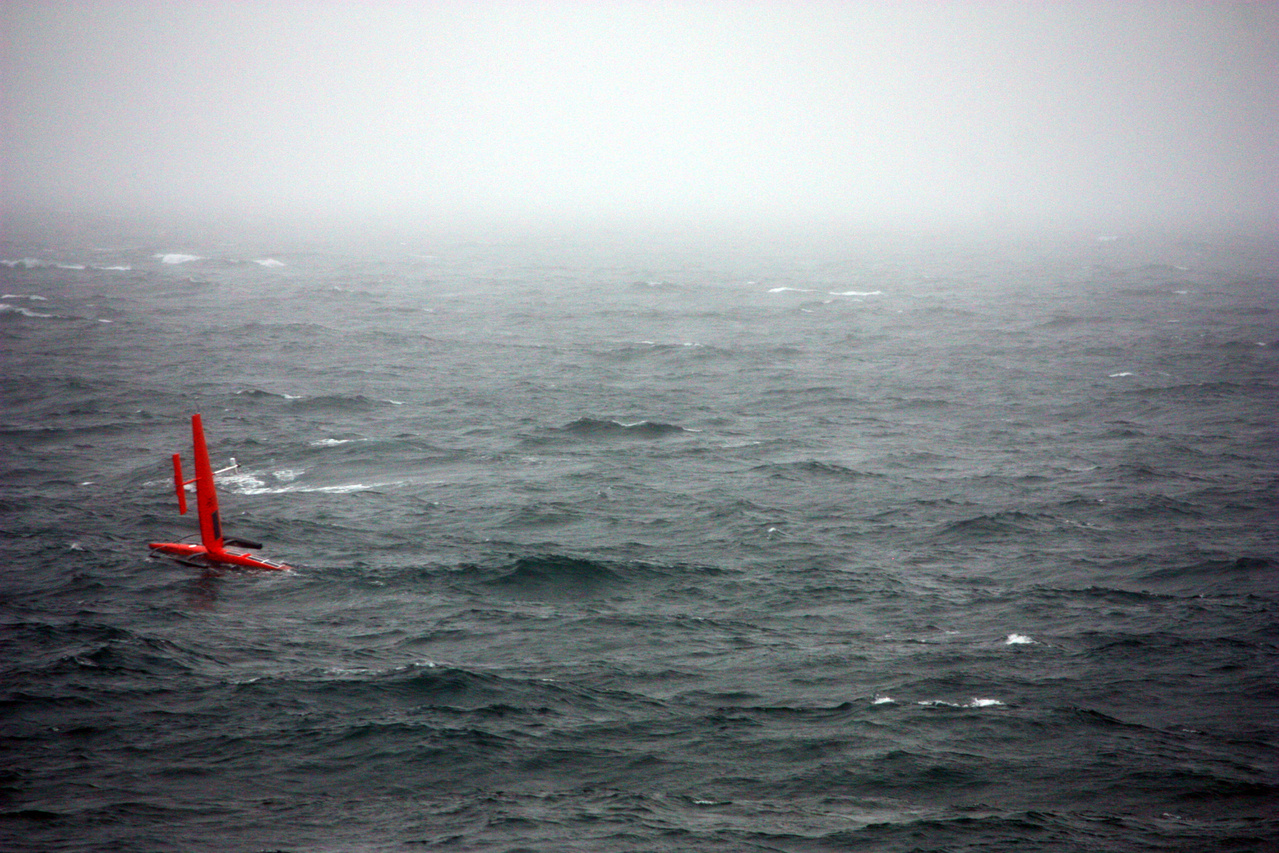 DeRobertis wanted to evaluate the potential for unmanned surface vehicles to make long-term acoustic measurements. His team collaborated with other groups to equip a pair of saildrones with fish finders and deploy them for months. They made ‘follow the leader” comparisons with the state-of-the-art research NOAA ship Oscar Dyson in areas of the Bering Sea where midwater fish are dominated by walleye pollock.

The team found that the saildrones collected high-quality acoustic data over a long-term deployment of 103 days. The numbers of fish detected by saildrones compared well with those of the Oscar Dyson.

However, in some cases, the fish appeared to dive when Oscar Dyson, a noise-reduced vessel designed to minimize fish avoidance reactions, approached. This happened only when the fish were at shallow depths (<100 m) and was more pronounced at night. Fish at deeper depths showed no avoidance response to the ship. So this isn’t really a problem for NOAA Fisheries surveys in Alaska, which typically occur during the day when fish are at deeper depths.

“The saildrone results do show that fish react to even the stealthiest of scientific research ships in some situations. Ship avoidance behavior is hard to measure, but more use of oceangoing robots may help us learn more about this behavior,” De Robertis said.

An example of a large aggregation of Alaska pollock observed by the saildrone.

Recent advances in autonomous vehicles together with the development of highly capable fishfinders (echosounders) with low power requirements made long-term acoustic measurements of fish abundance possible.

“This would have been incredibly difficult to do even a few years ago.  It was the right time and we had the right people. All kinds of technological developments coincided to make this possible,” said De Robertis. “We had engineers from NOAA Research’s Pacific Marine Environmental Laboratory’s Innovative Technology for Arctic Exploration group who are really good at adapting instrumentation to work in harsh ocean conditions and who had already been using a saildrone for their oceanographic research. The team at Saildrone brought to the table their skills as sailors, programmers, and engineers. Kongsberg built the acoustics instrumentation and together we modified it so the saildrones could talk to it. Within a year we were able to make it all work.”

“We’ve solved the major technological issues,” said De Robertis. “Although ocean-going robots have been equipped with fishfinders in the past, this work makes it practical to use for long periods—months rather than days. Now we just need to take advantage of these new tools, and figure out how to best exploit them to learn about the ocean.”

What Could Not Be Done Before

NOAA Fisheries has already begun to explore the many possibilities that unmanned surface vehicles equipped with acoustic fishfinders offer for research that could not be done before.

“We’ve just completed some Arctic work in the Chukchi Sea. Alaska’s Arctic is an ideal area for a drone survey because its midwater fishes are dominated by a single species, Arctic cod. The whole survey was done by robots. Without trawl samples from ships, the data we are collecting are not up to the stringent standards required for fisheries management. But the saildrones are collecting information where we had none before,” De Robertis said.

Other applications for long-term deployments of saildrones include:

“Other NOAA Fisheries staff are tagging fur seals. Together, we are using saildrones to follow the fur seals and survey fish in their foraging areas. We hope to gain a much better understanding of how fur seals respond to prey variation than was previously possible. I’m really excited to see how this turns out.”

“If you had told me 5 years ago that we could do what we can do now, I would have said no; it’s science fiction. Now I think in 5 years it will be routine,” said De Robertis.

Wind Influences Pollock Success in the Gulf of Alaska