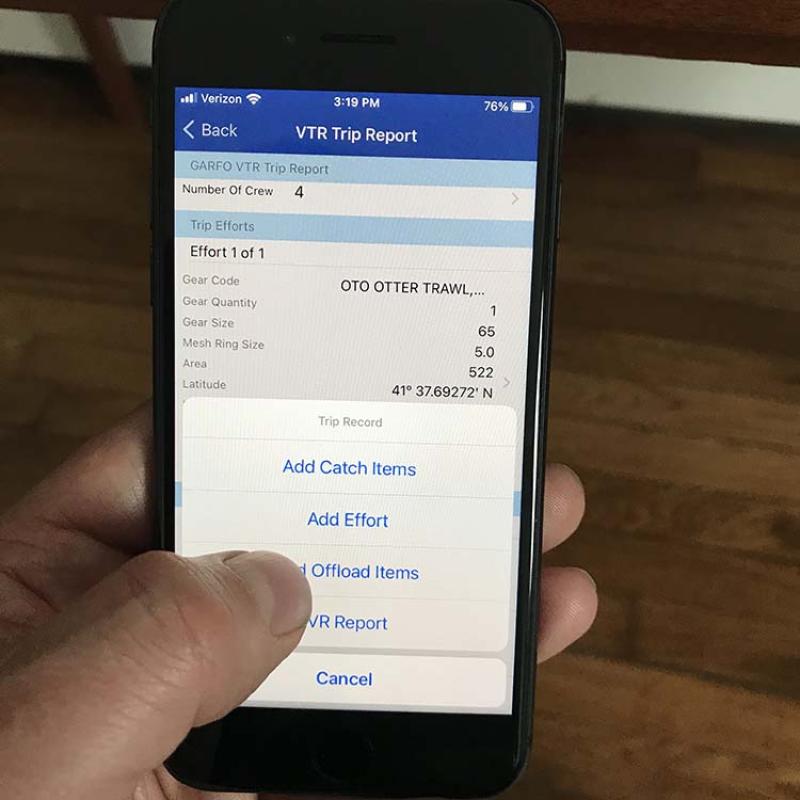 This fall, many commercial and all federally permitted for-hire fishermen will be required to report electronically rather than using paper logbooks. This will increase reporting efficiency, accuracy, and timeliness of the fisheries data we use to manage fish stocks in our region. Some fishermen have already begun to use electronic reporting and are finding it easy to use.

Ryan Kelly is the owner/operator of the F/V Seaquestor II out of Barnegat Light, New Jersey. He has been reporting electronically on his iPhone for several years using our iOS Fish Online app.

This feature is especially helpful in rough weather. Captain Kelly’s experience with electronic reporting has been positive, and he is helping other fishermen learn how to do it themselves.

In Point Pleasant, New Jersey, Patrick Fehily, F/V Major Expense and F/V Market Price, is new to electronic reporting but already recognizes its benefits. He appreciates that the Fish Online app ensures that all entries are complete and correct before a report can be submitted. That means he will not have to make corrections later. Also, the app prevents any handwriting or code issues. Captain Fehily says that it’s “actually one of the easiest apps I have ever used in my life, and it’s so easy to use as an operator that you can’t really make a mistake with it.”  He encourages other fishermen to start using it now and not wait until the last minute when NOAA Fisheries staff will be very busy assisting fishermen’s transition to electronic reporting.

Captain Mark Palombo, F/V Terri Ann, fishes for lobster and Jonah crabs out of Sandwich, MA, and has been reporting electronically via our Fish Online (FOL) eVTR for iOS app since 2020. When he first started using it, Captain Palombo was hooked after about ten trips and never considered using paper VTRs again. He finds electronic reporting more efficient than paper reporting for a variety of reasons:

Captain Palombo notes that, “Any one of us technologically challenged people can figure it out.”

Captain and New England Fishery Management Council member Vincent Balzano, F/V Northern Lights, Portland, ME, uses the FOL eVTR for iOS app to report his trips electronically. He has been reporting electronically long enough that he experienced several software updates in this iterative development process that were frustrating to accommodate. However, he thinks that the most recent version of this reporting software is more reliable and intuitive, and he was able to figure out an issue on his own. Captain Balzano wants to be finished with trip reporting as soon as he leaves his boat, and says that electronic reporting gets this done for him.

How to Report Electronically

All fishermen can choose from several smart devices and web-based apps to report electronically. For more information and technical support, go to Vessel Trip Reporting or contact your local Port Agent.