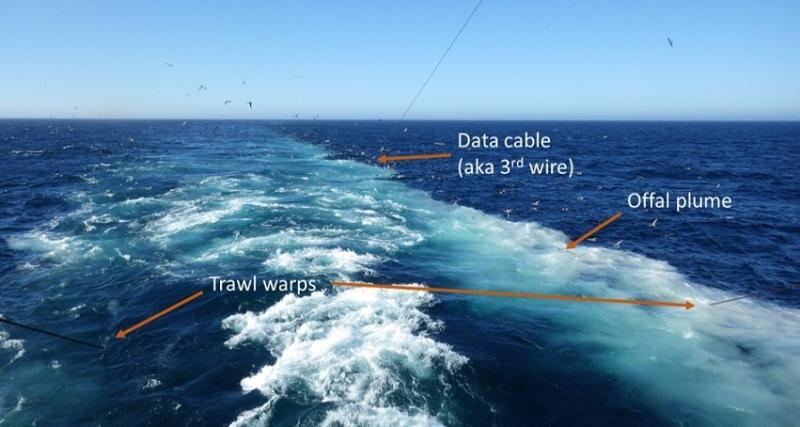 At a two-day workshop last fall, scientists and industry representatives met to design potential solutions to the problem of seabirds striking net cables on catcher–processor vessels in fisheries along the U.S. West Coast and Alaska. Five cost-effective measures were proposed and are being voluntarily tested by vessels in the fleet, potentially saving the lives of endangered albatross and other seabirds. The workshop and the proposed solutions are described in a new NOAA technical memorandum (PDF, 54 pages).

What Attracts the Birds

At-sea trawl fisheries along the west coast and Alaska utilize catcher–processors, vessels that contain onboard facilities for turning caught fish into a variety of products, including surimi, fillets, and fish oil. These products are then immediately packaged and frozen, if necessary, ensuring their freshness and quality.

The unused parts of the fish, collectively known as offal, are dumped overboard, where they become food for predatory fish or sink to the bottom and feed crabs and other invertebrates. Before it sinks, however, the offal floats in a long plume beside and behind the boat. This naturally attracts hungry seabirds, including albatross.

The problem is that trawl nets are held in place by long cables that stretch tight while the boat moves forward. In addition, a data cable, known as a third wire, stretches from the top rear of the boat down to the net in the water. It’s long been known from similar fisheries that when birds attack an offal plume, they can occasionally hit one of these wires and be injured or even die. What we still don’t know for sure is how often this happens.

“One of our collaborators noted this problem on vessels in Alaska,” said Dr. Jason Jannot, a biologist at NOAA and one of the organizers of the workshop. “These same vessels also fish the west coast. That suggested that there might be cryptic mortality: bird deaths that we didn’t know about.

“So, as a special project, we had fisheries observers spend some time on deck and watch the cables. And we realized that we’d been underestimating the potential impact of these cables along the west coast.”

For example, in 2016, only two albatross deaths were observed in the west coast at-sea hake fishery. But based on data from the special project, Jannot and his colleagues estimated that the true number that year was probably closer to 47.

That’s when the idea for a workshop was born. Said Jannot: “We got together with representatives from the at-sea fishing industry and our partners at Oregon Sea Grant, Washington Sea Grant, NOAA, and the U.S. Fish and Wildlife Service. And the idea was, Can we brainstorm some solutions to reduce seabird mortality from cable strikes?”

What We Can Do About It

The Seabird Cable Strike Mitigation Workshop took place in Seattle in early November 2017, and was almost evenly split between representatives from government organizations and industry, including fishing vessel captains and members of seafood associations.

The participants quickly decided to focus on physical solutions, rather than changes to the fishing or fish-processing routines. As Dr. Tom Good, NOAA biologist and co-organizer of the workshop, put it: “If you can design and build something cheaply and it works, and it only takes a short time to install—those strategies are the ones that appeal to people.”

The solutions included such ideas as mounted hoses that could spray water at the net cables (but not at the birds themselves!) to keep birds at bay, and a variety of methods for simply increasing the visibility of the wires so that the birds would be able to avoid them with time to spare.

“The nice thing about coming up with a suite of potential solutions,” said Good, “is that different methods appeal to different people. Something that works on one boat may or may not work or be cost-effective on another.”

In fact, the water deterrent was tested earlier this year on the F/V Seattle Enterprise, a catcher–processor in the Bering Sea pollock fishery off Alaska. As reported by Austin Estabrooks of the At-Sea Processors Association, the vessel’s first mate attended the workshop, and was inspired to give this solution a try.

The crew were able to adapt the same hoses they use for cleaning the decks by tying them to an elevated platform about 25 feet above the water. And while the water pressure wasn’t strong enough to reach the third wire, the strategy was effective at keeping birds away from the net cables.

“The birds avoided the water and stayed away from the trawl warps, even on the side where they had offal discharge,” Estabrooks said. “It was a simple solution that the guys can do on a regular basis. It’s a no-nonsense bird-mitigation device that’s usable on pretty much all of our vessels.”

As more vessels adopt these strategies, NOAA scientists will continue to work with industry to study their effectiveness, thanks to a grant from NOAA Fisheries’ National Cooperative Research Program.

“We’ll have dedicated seabird observers on some of the vessels,” Good said. “They’ll have certain scientific questions in mind; they’ll be able to conduct observations for longer time periods than fisheries observers; and they’ll be able to observe birds that strike cables to better understand outcomes. If a bird strikes a cable, does it float away, die, or is it basically okay? That will help us refine some of our study questions and our mitigation measures.”