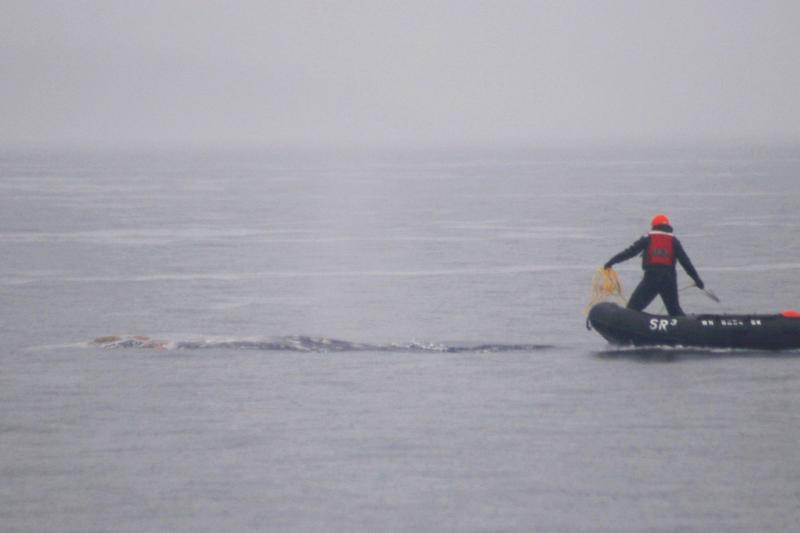 A gray whale entangled in fishing gear in Puget Sound on April 13 was largely freed over the weekend after a response team fitted the whale with a tracking buoy, which then serendipitously caught on a yacht's rudder and pulled off some of the entangling fishing gear, according to marine mammal entanglement experts that tracked the whale.

An alert captain of the M/V Kittitas ferry on the Mukilteo-Clinton crossing north of Seattle first spotted the gray whale with fishing gear trailing behind it on Friday. The report was relayed to NOAA Fisheries, which then activated its Large Whale Entanglement Response Network. The Network is comprised of Agency trained and permitted responders including a team from Sea Life Response, Rehabilitation and Research (SR3), and Cascadia Research Collective.

Since the weather on Friday was too windy for a safe response, the team began a search early Saturday morning, which turned into the wettest April 14 on record, according to Dr. Cliff Mass, University of Washington Meteorology Department. Late in the day, in heavy rain and fog, the team found the whale, attached a satellite tracking buoy and photographed the whale underwater to better understand the entanglement, which is critical to ensuring all of the life-threatening gear can be removed. 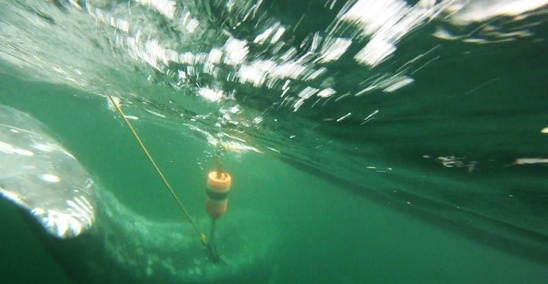 An view of the telemetry buoy that the large whale entanglement response network tracked until the signals stopped. Photo by SR3/CRC, photographed under NOAA permit.

The fishing gear, which may have been from a crab trap, wound around the whale’s body. The line held one float tight to the left side of the whale’s mouth and then exited the right side of the whale’s mouth, trailing underneath the right flipper to a second float positioned just forward of its tail flukes. At sunset Saturday, the team suspended the rescue effort, but attached a satellite tracking buoy to the whale. The tracking buoy would allow the team to track the whale through the night and find it again the next morning to remove the fishing gear entangling the animal.

In an unusual turn of events, the tracking signals stopped overnight, suggesting the tracking buoy was being held underwater. Since they had no signal to follow, the response team on Sunday broadly searched areas where the whale had been seen on Saturday. Cascadia Research searched from an airplane.

About noon on Sunday, the team received new signals from the tracking buoy indicating the buoy was on land near Port Hadlock, which was confusing. Soon, a call came through the SOS-WHALe Hotline from the owner of a vessel assist company. He said that his company had retrieved the tracking buoy with some of the original entangling gear after finding it caught on the rudder of a yacht Sunday morning.

The vessel owner reported seeing the whale swim under his boat and heard the tracking buoy hit the hull while the whale surfaced just off the side of the boat. The whale then rolled and surfaced twice while swimming northbound afterwards. Responders believe that the entangling fishing gear by chance caught on the rudder, which unfortunately pulled loose the telemetry buoy, and thankfully cut the entangling line and removed one of the floats from the fishing gear.

Based on the eyewitness account and the gear collected, the whale is apparently still carrying a single float from the remaining fishing gear on the left side of its head with fishing line exiting the right side of its mouth in a "clean bitter end" – meaning it can easily pass through the mouth and the baleen. This configuration commonly comes off over time – and is considered not life-threatening.

A comparison of the unique markings on this whale to Cascadia’s long-term catalog of gray whales did not find a match, indicating it was not part of the Pacific Coast Feeding Group that regularly feeds in the spring-fall in the Pacific Northwest, or the local group of Sounders gray whales that return each spring to the waters around Whidbey Island.

Team members are hoping to spot the whale again to tell if any entangling fishing gear remains, and to check its health. They are asking whale watchers and boaters to keep a look out and call 1-877-SOS-WHALe or hail the Coast Guard on Channel 16 if they see this or any other entangled whale.

Last week an entangled gray whale died and washed ashore on the outer coast of Washington, a sober reminder that not all whales are as lucky as this one to have been spotted and reported promptly. If you come across an entangled whale, it is extremely important to keep an eye on the animal at a safe distance (to protect yourself and avoid scaring off the whale).  Take photos and video, and call 1-877-SOS-WHALe. If possible, it is helpful to remain with the whale until a trained and experienced team arrives.  Although whales are large, it can end up feeling like looking for a very large needle in a very large haystack – our oceans.

As a reminder, only permitted and trained personnel under NOAA’s Marine Mammal Health and Stranding Response Program (permit # 18786-02) are authorized to respond to entangled whales. Attempting to disentangle a whale without training and authorization is not only dangerous to the responder but also the whale. 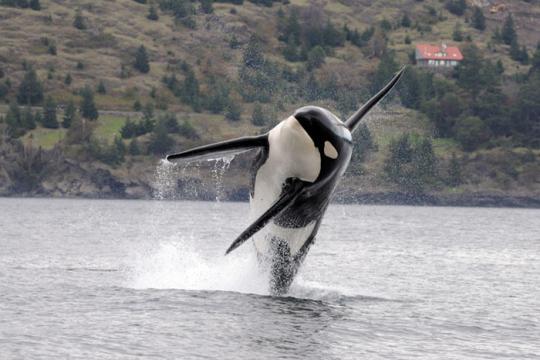 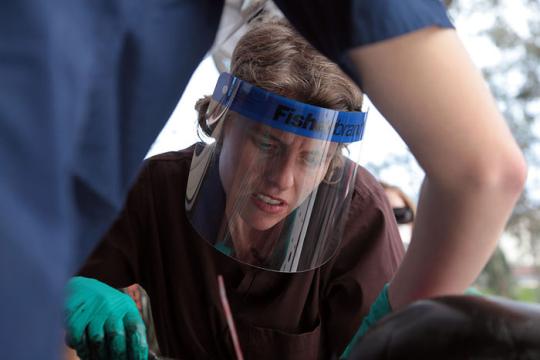