Why are the numbers of Hawaiian monk seals decreasing in certain locations while they stay stable in others? What drives their population trends? Is it changes in plankton abundance, prey availability, predators, or something else? Using an ecosystem mode 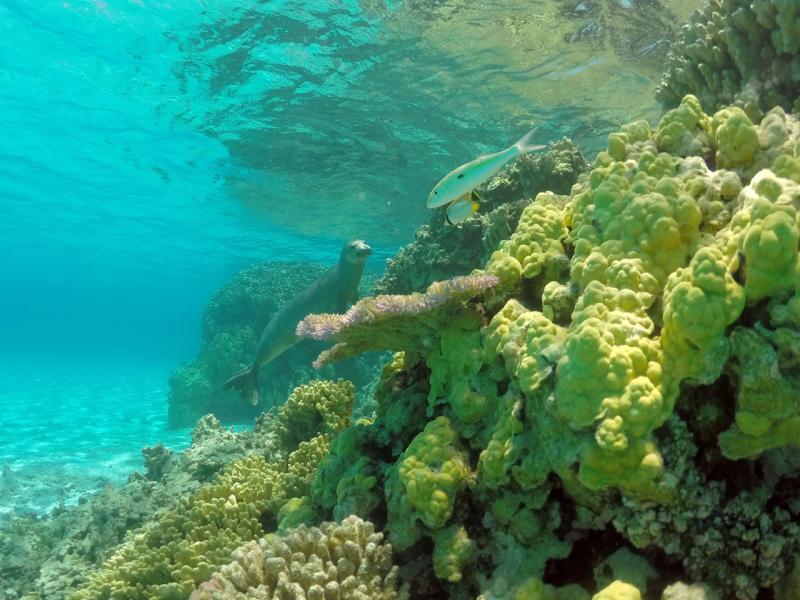 Why are the numbers of Hawaiian monk seals decreasing in certain locations while they stay stable in others? What drives their population trends? Is it changes in plankton abundance, prey availability, predators, or something else? Using an ecosystem model, NOAA scientists at the Pacific Islands Fisheries Science Center explored the importance of many factors that influence growth and mortality of Hawaiian monk seals at two different locations, Laysan Island and French Frigate Shoals, in the Northwestern Hawaiian Islands.

They looked at the importance of productivity (amounts of plankton and seaweed that form the base of the food web), food availability, and competitor and predator presence. When the scientists used the model to simulate an increase in productivity, the entire ecosystem flourished with increases in biomass for all groups in the ecosystem and, predictably, with a decrease in productivity, the opposite was true. Simulating lower numbers of prey fish resulted in an almost 60% decrease in the biomass of monk seals. Clearly, the availability of prey fish (especially bottomfish) is important to support the monk seal population. Simulating a decrease in the number of predators resulted in various winners and losers in the marine ecosystem of Laysan but didn't help the monk seals; however, when there were fewer predators in French Frigate Shoals, the monk seals benefitted (mostly thanks to easing shark predation on seal pups).

Ocean ecosystems are incredibly complex and scientists know that a variety of factors work simultaneously to influence them. The team took their "hypothetical" findings and examined what factors might explain the varying population trends observed at Laysan and French Frigate Shoals over the last 20 years. They examined large-scale impacts to productivity like climate patterns (the Pacific Decadal Oscillation) and impacts to fish populations like mortality from the historical bottomfish fishery and other sources of mortality, such as, shark predation, and how these impacts might contribute to monk seal population trends. For both Laysan and French Frigate Shoals, productivity played a role, but the fishery was an important driver of monk seal population trends (likely through the reduction of food for monk seals). Both systems had other mortality factors that contributed to historic downward trends in the monk seal populations, however. These other sources of mortality, which could be the disproportionate effect that Galapagos shark predation of Hawaiian monk seal pups has on population trends, were particularly important for French Frigate Shoals.