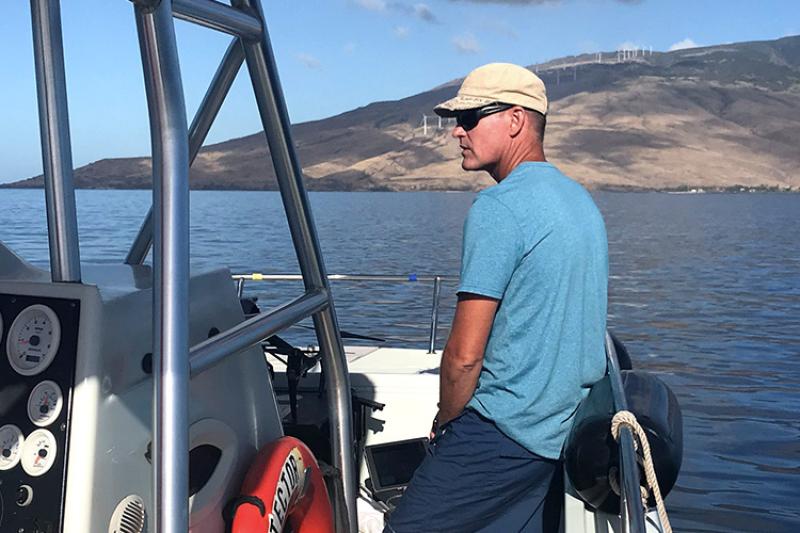 In this Q&A, edited for clarity and length, we chat with Dr. Lars Bejder, director of the Marine Mammal Research Program at the University of Hawaiʻi’s Hawaiʻi Institute of Marine Biology (HIMB). In continuous operation for more than 20 years, the program is dedicated to learning more about Hawaiʻi’s marine mammals, including their population and spatial ecology, behavior, and health, with special attention paid to how this information can be applied to conservation and management issues.

Formerly a professor and research lead at Murdoch University in Perth, Australia for more than a decade, Bejder joined HIMB in January 2018. He has studied numerous species of cetaceans over his research career of 25 years, including Hawaiian spinner dolphins and how they’re affected by dolphin tours and other human interactions. He has closely collaborated with both the NOAA Fisheries Pacific Islands Regional Office and Pacific Islands Fisheries Science Center, as well as numerous other organizations, universities, and individuals throughout Hawaiʻi and the world.

Tell us about HIMB’s Marine Mammal Research Program and some of your current projects.

Prior to my arrival, the program was heavily focused on how cetaceans produce and perceive sound. We're certainly going to continue the acoustic work but that will only be one tool in the toolbox. We're taking a shift and aligning our work more closely with management needs, so we're going to be doing both empirical and applied work and work very closely with management agencies so that we can help them in achieving their mandates while we’re still conducting empirical research. A lot of this work will include gathering information on population abundance and health assessments and defining important habitats, while also studying behavioral ecology that helps us understand population dynamics.

One important point is that this work involves a lot of people. It is truly a collaboration among many different researchers and students and I'm just one person out of a large team. It's important to work collaboratively and across skill sets—you have to build a team with different skill sets and everybody plays their own important role.

For our work right now, we’re initially focusing on a couple of species that are more accessible than others: humpback whales and Hawaiian spinner dolphins. I've been studying spinner dolphins within the Hawaiian Islands for the last 10 years and worked closely with NOAA Fisheries on management issues, so we're going to be continuing that work.

For the humpback whale project, we are looking at body condition across Alaska and Hawaiʻi with other collaborators—the Alaska Whale Foundation and the Pacific Whale Foundation, for example. It’s really exciting to me because we're looking at the cost of migration between feeding and breeding grounds and at how much flux there is in the physical condition of animals’ bodies. There's so much change in the morphology and the weight of these animals and linking these two important habitats [feeding and breeding grounds] is really exciting. It's going to be a very powerful tool to help us understand this population.

Speaking of humpback whales, you recently captured drone footage of a mother whale with her newborn baby calf off Maui, Hawaiʻi. Tell us about that.

That was very much possible thanks to a lot of community support that put us in the right place at the right time. We were working, trying to measure the body morphometrics on the humpbacks off Maui, so a lot of the local operators knew we were there and a local operator was actually hosting us that week. Specifically, we were out with Ultimate Whale Watch, and the Oceanwide Science Institute and the Applied Research Laboratory at University of Hawaiʻi were helping us.

We were on their [Ultimate Whale Watch] when one of the other operators called on the radio and said, "Listen, there's a lot of commotion here with white water and some blood. Come have a look." Sure enough, when we went over there and got the drone out, we saw the mother and the newborn calf. So it’s very much thanks to local stakeholders and community support that got us there in the right spot.

Our best guess is that the calf was born 20-30 minutes before we got there. When we did get the drone up, the mom was still bleeding from the birth and the calf’s fluke strokes certainly looked a bit uncoordinated. But it's pretty incredible that these calves can instantaneously go up and breathe; obviously, the mom was still supporting the calf, but it's still pretty impressive. 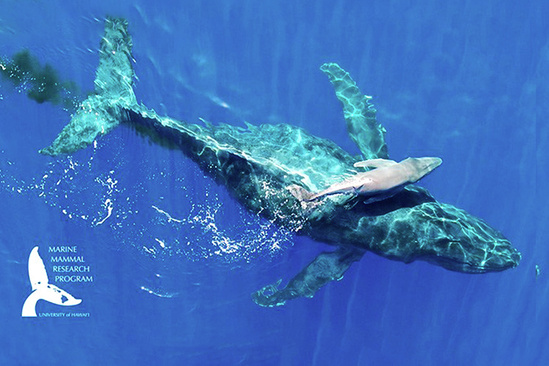 How did this experience compare with some of your other interactions with marine mammals?

We're very fortunate and have seen many unique things. We do have to go through a rigorous process of permitting and credentials [with NOAA Fisheries] but that does provide us with a lot of time and physical proximity to these animals that gives some insights and opportunities that we're very fortunate to have. We’ve had memorable experiences with southern right whales in Australia and we’ve seen some amazing things with sperm whales, small little Hector's (dolphins), and bottlenose dolphins off New Zealand. But this experience, in particular, was kind of cool—after 25 years of research, it’s certainly the closest I’ve gotten to seeing a live whale birth.

Drones are becoming fairly prominent in cetacean research, helping scientists learn new things about marine mammals that weren’t previously possible. Have there been any other technological advances throughout your career that have similarly been game-changers?

We have worked very closely with Professor Peter Madsen from Denmark Aarhus University, who uses DTAGs (Digital Acoustic Recording Tags) or suction cup tags to study cetaceans, and that collaboration has been very eye-opening. The non-invasive suction-cup tags have multiple sensors in them, including a pressure sensor for depth measurements, stereo hydrophones that record ambient sounds and sounds animals produce, and accelerometers that allow for detailed information about three-dimensional movement.

We recently published papers from Australia in quantifying important breeding and resting grounds for humpback whales and those kinds of tags and technology are really providing powerful data to inform management. We found that certain areas are critical habitats for these animals but they’ve also been opened up for commercial exploration, and I think that will be important information to help move those kinds of developments forward in a sustainable manner.

Aside from this work with humpback whales in Australia, what other findings or projects throughout your research career stand out as being important or especially interesting to you?

We did one project down in Shark Bay, Australia that looked at the impacts of tourism on cetaceans. Globally, it's a multi-billion dollar industry and it provides a lot of positive things for these animals and the local economies. There is, unfortunately, a negative side to that, but those things have been very difficult to quantify because [the animals] are long-lived and slow breeders. The work that we did in Shark Bay showed that the tourism industry could have negative impacts and that work provided insights into how to manage that industry locally—and that has had spillover effects elsewhere around the world.

Where does your passion for studying cetaceans come from and what really drives your research?

I think like most people, I just had a general love of the ocean that just evolved that way. I was always interested in using science for conservation and the fact that I then became focused on cetaceans was part of the process, I think. Fortunately, some populations of cetaceans are slowly recovering, but certainly there are others that aren't doing so well. So I think it's really important that we do good science and help management agencies understand the science we're doing and help them implement management actions based on our results.

And I guess one of the things about studying these animals is that you can use it as a hook to raise awareness about other issues. They're fascinating animals but they also grab people's attention, so there's a lot of important messages you can get across to the general public—those that would typically be harder for people to pay attention to—by using them as sentinels for ocean health and the many things that are happening in the ocean. 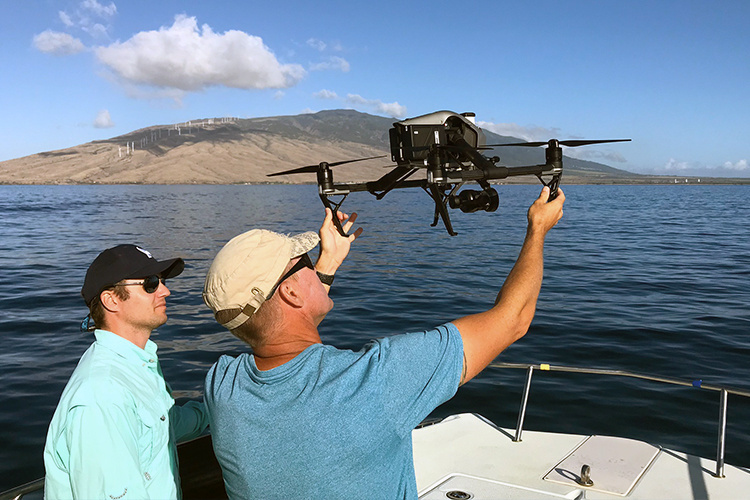