A frequent NOAA Fisheries collaborator, Marc Lammers is a pioneer of bioacoustic monitoring research for not just whales and dolphins, but also coral reefs. 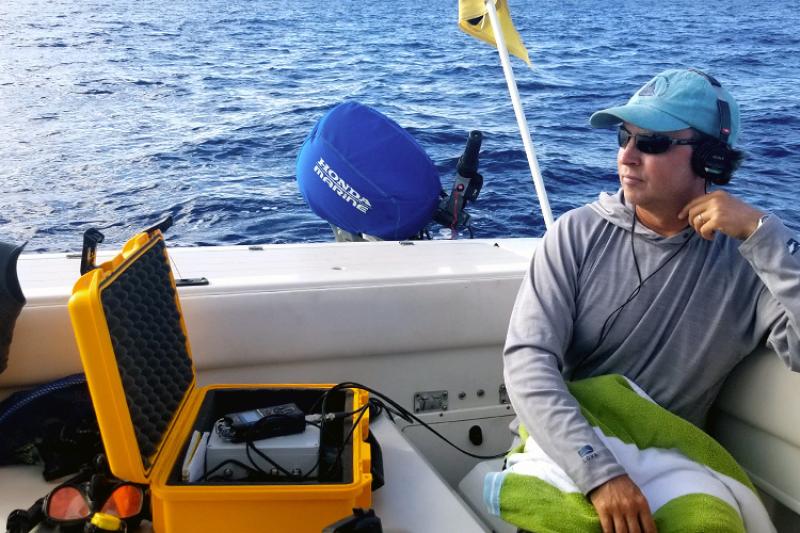 In this Q&A, edited for clarity and length, we chat with Dr. Marc Lammers, research coordinator for the Hawaiian Islands Humpback Whale National Marine Sanctuary, which is jointly managed by the NOAA Office of Marine Sanctuaries and the State of Hawaiʻi Department of Land and Natural Resources.

Lammers has played a pivotal role in advancing bioacoustic monitoring research within the Pacific Islands region and abroad. He was formerly a research faculty at the University of Hawaiʻi’s Hawaiʻi Institute of Marine Biology and a contract scientist with the NOAA Pacific Islands Fisheries Science Center, where he helped pioneer the acoustic monitoring of coral reefs.

In 1998, Lammers co-founded the Oceanwide Science Institute, a nonprofit organization involved in acoustic monitoring projects throughout Hawaiʻi and various other regions. These include a project with the NOAA Fisheries Pacific Islands Regional Office to monitor Hawaiian spinner dolphins, a project to monitor the effects of military mine detonation exercises on local dolphin populations along the U.S. East Coast, and a project to monitor the effects of development activities in Hong Kong on the Indo-Pacific humpbacked dolphin.

As research coordinator for the sanctuary, what are some of your main goals?

One of the major issues that we're dealing with is the recently reported reductions in the number of humpback whales that have been coming to Hawaiʻi and sanctuary waters, in particular. This population—the whales that winter in Hawaiʻi and are in Alaska in the summer—were delisted from the Endangered Species Act back in 2016, and immediately thereafter we started seeing some pretty dramatic decreases in their numbers. So we're trying to wrap our head around what's causing that, and one of the things we've been doing is engaging with the broader research community in Hawaiʻi and also with collaborators in Alaska.

We also have other efforts to understand humpback whale occurrence and behavior within the sanctuary itself. We use acoustics very heavily because that is part of my research background, so we have acoustic recorders in various places throughout the sanctuary that allow us to understand where whales are going and how they're using sanctuary waters.

We've also been ramping up our efforts to tag whales and understand their fine-scale behavior. These suction cup tags have motion sensors to track how whales are moving through the water column, as well as acoustic recorders to record the sounds that they produce and the sounds that they are exposed to.

All of these projects are in partnership with other researchers and institutions. For example, we work closely with the University of Hawaiʻi at Hilo, specifically with Adam Pack. He and I have a project where we're studying humpback whale songs and trying to learn more about its  function and why whales actually sing. Other close partners include NOAA Fisheries, the Hawaiʻi Institute of Marine Biology and many local NGOs.

Are there any working theories to explain this drop in humpback whale numbers in Hawaiʻi?

The short answer is that we don't know yet. We are still considering different possibilities because we don't know if it's a true reduction in actual numbers or if it's just the animals going to different places. There is generally a consensus among researchers that there seems to be something going on with the prey resource in the feeding grounds. There's been some dramatic changes in productivity in some parts of the Pacific, which are likely driven by some of the warm-water events that we've had in recent years. We also have to consider other possibilities, such as a natural fluctuation in numbers, as the whales may have reached their carrying capacity.

How did you get involved in acoustic monitoring research?

I started out with a general interest in marine mammals, and I then focused on acoustics because it became clear to me that it’s a key component to understanding marine mammals, which are very acoustically sensitive and active. And then about 16 years ago, Rusty Brainard [at NOAA Fisheries] first approached me with the idea of monitoring coral reefs acoustically in a postdoc position. At the time, I had been doing my dissertation work on Hawaiian spinner dolphins, so this was a new direction—but I also thought it was an interesting new direction because nobody really thought that acoustics could play a role in studying coral reefs.

The first thing I had to do was develop a tool because there just weren't those kinds of tools that would allow us to monitor coral reefs acoustically. I developed an early prototype of a type of recorder, and then once that showed some promise we developed what's now known as the Ecological Acoustic Recorder, or EAR. It was a unique instrument in the sense that it provided the ability to record the environment for a period of time at a price tag that was affordable. There were some other types of recorders that people had developed, but they were so expensive that they were prohibitive for the things that we were interested in doing, which was to put a lot of these out and record sounds at lots of different places. So the EAR filled this need at the time and it became a very popular tool—people started contacting me wanting to use it  for all kinds of things all over the world.

Looking back at your career, what would say is your proudest moment as a scientist?

If there's one thing that I am happiest about, it’s that I've played a role in helping to push forward the notion that you can use the sounds that are in the ocean in a very meaningful way to try to understand the ocean and the animals that inhabit it. We’ve done that over and over again in so many different parts of the world and it's given us a sense of things that are happening that we wouldn't have had any other way of knowing about.

It’s just really cool, whether you’re learning about humpback whales in the Northwestern Hawaiian Islands just by having acoustic recorders out there and listening, or you’re recording coral reefs and seeing all these broad biological cycles—daily cycles, monthly cycles, lunar cycles, seasonal cycles—materialize in front of you as you're looking at your data. You're uncovering something that just wasn't known before; it was always there, it just wasn't documented. And then by monitoring these things and the changes in patterns over time, you’re able to say something about how these habitats are changing.

For me, those have been the most gratifying things that I've been involved with.

Conducted under NOAA permits, your research on marine mammals sometimes requires you to get dangerously close to large whales. Can you describe what that experience is like.

I’ve been doing this work with Adam Pack where we get these calibrated measurements of humpback whale songs. I have a specialized type of audio recorder that I go into the water with, and Adam goes in with a video camera to conduct videogrammetry [a technique to extract precise measurements of whale size  from video images]. We are in snorkel gear at the surface and we have these 45-ton animals, which are in some cases only 60 feet away from us, just singing so loud that the tips of our fins are vibrating and we’re feeling it in our chest cavities. It's very impressive to have these leviathans just blasting their songs right at us.

And then they go through their song cycle and stop, and they kind of look up and start heading to the surface and in some cases they look right at us. As they're swimming by, we have a few seconds where we’re looking into the eye of one of the largest animals in the world and those are very special moments. As the animal comes up for breath, the whale knows we're there and we're looking at it and most often it just takes its breaths and then goes right back down and begins singing again. It’s those moments that make us realize why we’re doing this kind of work: So that we can hopefully make a difference in these animals' lives.

[Please note that this type of close-up work is conducted under NOAA permits #19655 and is only allowed because there's a scientific purpose. It is not safe or legal to get this close to humpback whales without a permit.] 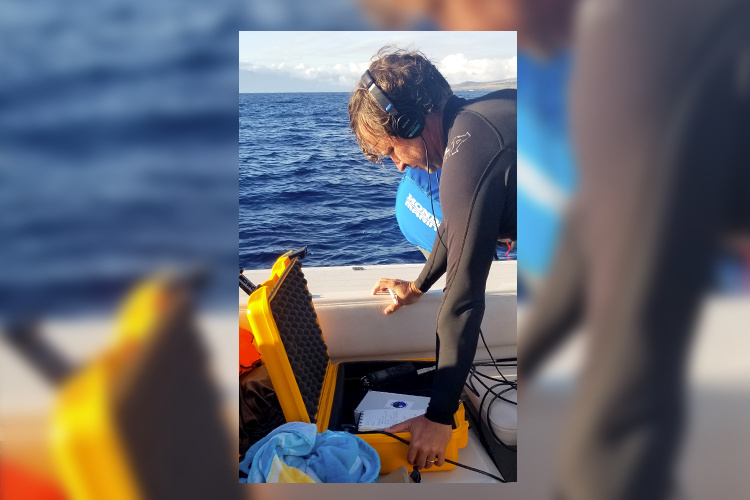 Lammers has a project with Adam Pack from the University of Hawaiʻi at Hilo to study humpback whale songs. Photo: NOAA/Eden Zang.

Is that what drives you daily to do the work that you do?

I think the most succinct way that I can put it is that I strive to have a net positive effect on the world.  We all have an impact in one way or another, and I guess for me the goal is to have a positive influence  and try to leave things in a better state than I found them.

I believe we all need to do our part and find how we can make the best contribution. For me, that’s through the work that I do. Because it's ultimately not just a job, but rather a passion. It's a process of discovery and trying to build upon our knowledge, but really with the end goal of preserving our natural world through understanding it better. And if by doing so we can connect people to more than just these animals, it’ll hopefully help them have a deeper relationship with nature, and inspire them to take better care of it.