Faces of Whale Conservation in the Pacific Islands: Adam Pack, University of Hawaiʻi at Hilo 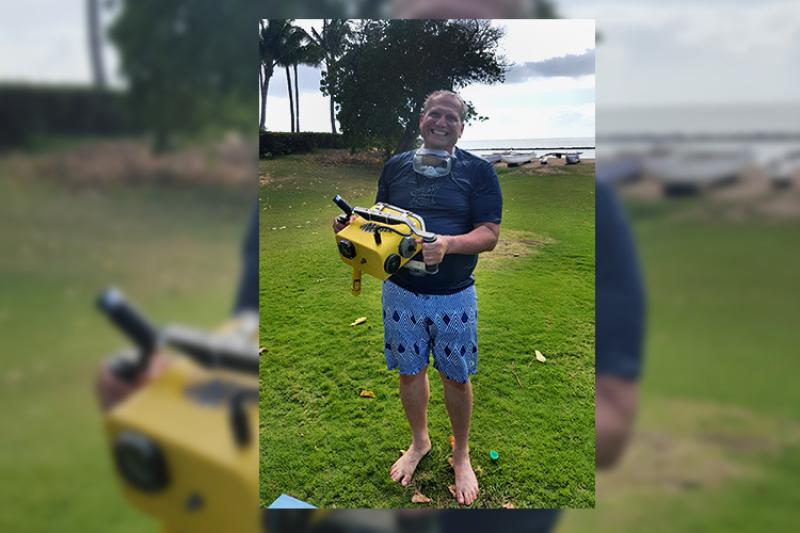 In this Q&A, edited for clarity and length, we chat with the University of Hawaiʻi at Hilo’s Dr. Adam Pack, who holds a joint appointment in psychology and biology, chairs the psychology department, and is the cofounder of the Listening Observatory for Hawaiian Ecosystems (LOHE, which means “to perceive with the ear” in Hawaiian) bioacoustics laboratory .

In 1993, Pack co-founded the nonprofit organization The Dolphin Institute, which is dedicated to the study and conservation of cetaceans and to the education of people of all ages about these animals. The institute serves as a vehicle to reach beyond the confines of a university to a broader community to help support this type of research while facilitating communication on a larger scale.

Through his various appointments and his work on whales and dolphins, Pack has collaborated with NOAA Fisheries for decades, providing valuable insight into the behavioral ecology and communication systems of humpback whales, Hawaiian spinner dolphins, and other marine mammals, and to our understanding of dolphin sensory perception, cognition, and language abilities.

How did you get involved with studying humpback whales?

I was born and raised in New York and did my undergraduate work at Brandeis University in Massachusetts in biology. I started my cetacean work in 1983 when I was 20 years old as an intern at the Kewalo Basin Marine Mammal Laboratory under the direction of Dr. Louis Herman, who was a professor at the University of Hawaiʻi at Mānoa and took me in as one of the program’s first interns. I spent the first half of my career at the lab studying all I could about dolphin cognition and intelligence. In fact, my dissertation was on the relationship between dolphin echolocation and dolphin vision, showing for the first time that dolphins can immediately recognize complex shapes across the senses of echolocation and vision, and that dolphin echolocation yields a mental representation that preserves information about the spatial structure of an object.

And then in 1994, Lou asked me if I had ever been out to his humpback whale project, which had been conducting surveys of the whales since 1976 in Hawaiʻi and starting in 1980 in southeast Alaska. I knew the graduate students involved but I hadn't gone over to the project myself. So I spent 3 weeks out there with the research team off the North Kohala Coast of the Big Island. When I came back to Honolulu, Lou asked me how I liked it. And I said, "I loved it!" And he said, "Good, because you're going to run it from now on."

That's how he kept me here through my postdoc. And so, since that first year starting in 1994, more than 25 years ago, I've been the field director for the [lab’s] humpback whale project.

What has kept you passionate about these animals through more than two decades of research?

I think it initially began with and continues to involve extreme curiosity about the behavior of marine mammals and how that fits into telling the story about who they are. Through research, I enjoy being the storyteller. And through my publications and the talks that I give, I try to tell the story about the research topic or the species. And I think that's what researchers are: they're storytellers‚ they're discoverers, they're reporters. And ultimately they try to understand by employing scientific methodologies and then telling a story based on the results so that others can appreciate both the research and marine life in general. And really the goal is to try to engage people in ways that will make them not just curious and interested about the topic or species, but also responsible custodians for the future of the marine environment.

One of your main projects right now involves humpback whale songs. Tell us the story about this project.

This project is in collaboration with Dr. Marc Lammers, research coordinator for the Hawaiian Islands Humpback Whale National Marine Sanctuary, and we’re trying to get a better handle on the meaning of humpback whale songs.

Male whales sing this song and females don't. So we're looking at individual singers and, specifically, whether acoustic characteristics of an individual singer's song—like the amplitude of song units—are honest indicators of a male's fitness. In other words, whether they provide information to other males and females about a singer’s fitness.

We want to look at fitness in two ways. One is by looking at whether these acoustic characteristics are an honest reflection of the whale's size. Body size is very important to humpback whales in general, but especially on the breeding grounds because they're fasting—they rely on fat stores and metabolizing that fat for energy, and larger bodies can contain more fat. Our work has shown that larger females produce larger calves, and larger females are very attractive to males. And we’ve also seen that the males compete with each other for proximity to females that presumably they'll have mating access to. And so what we found in competitive groups, which is composed of two or more males competing for a female, is that the principle escort—the male that attains that coveted position next to the female—tends to be the largest whale in that group. So body size is important for males and females and what we're interested in now is: Are the song characteristics projected out to other individuals providing information on that aspect of fitness (the body size of the whale)?

And then the second thing is fertility. We're taking very small biopsy samples of whale skin and whale blubber (and this is allowed under our federal permit) and we're collaborating with Dr. Shannon Atkinson and graduate student Kelly Cates at the University of Alaska Fairbanks to measure testosterone levels in the blubber. And so what we want to see is: Are the males that have, say, a very loud song, also very large and do they have high testosterone levels?

Why would this information be important to other whales?

From another male’s perspective, if you have an appreciation of who that is that’s singing and how fit they are, you can make an informed decision about whether you want to take that male on in competition for the female.

From the female's perspective, if the singing male is very fertile and large, then it would be advantageous for her to mate with him. The female has a huge two-year investment in the calf, so she has to, in theory, make the best decision she can in terms of mating with a male that's fit and fertile and not wasting her time with males that are not. If she can glean fitness characteristics from the male’s song, then she can maybe direct the pod that she's in—and typically the female is the lead animal—to the area where that singer is, or perhaps signal the singer to her presence.

The most exciting research involves findings that lead to other research questions that you then go out and answer. If there is a strong correlation between certain song characteristics and body size and fertility, then the next question is: Are females actively soliciting or moving to areas where these larger, louder, and more fertile males are?

Can you describe some of your other exciting findings that have led to other research questions?

I would say that, collaboratively, one of the pivotal discoveries that I've been fortunate to have been involved with was my dissertation work, which looked at dolphin imagery through echolocation. That really pushed the envelope in terms of people taking a second look at echolocation and really trying to flesh it out even further with more studies. To me, it led to what's called a “paradigm shift,” which is a shift in thinking about a particular behavior or ability, so that was exciting.

In terms of the whale work, the body size work comes to mind. There have been a variety of papers that we produced on the importance of body size to male humpback whales and to females as well. And I think that work has led a lot of people to try to look at this characteristic through new technologies—like drone technologies—and to try to fill out the picture. So when they're looking at humpback whales in other populations, they’re taking into account what we've discovered here about the importance and role of body size as they try to interpret what they're seeing.

How do you measure whale body size and what other techniques or technologies are you looking forward to using in your work? 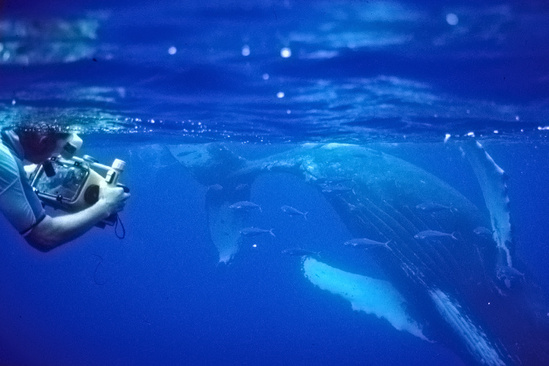 Right now, we’re using a technique that we developed at our laboratory called underwater videogrammetry, in which a snorkeler uses a video camera and a high frequency sonar device to measure the length of the whales at sea while also measuring their behavior. The sonar device measures the distance from the camera to the whale. This information in combination with the lateral image length of the whale relative to a computer screen, and the angle of view of the camera, can be used to calculate the body length of a whale. The collaborative invention (with Lou Herman and Scott Spitz) of videogrammetry was a game-changer for us. The beauty of this technique is that you get a continuous stream of video—you get the behavior of the animal at sea, its sex because you can identify that visually, and the size information. It really moved us into a new and exciting area of research that has had huge traction.

But videogrammetry requires whales to be stationary or slow moving, so we hope to upgrade our technology to be able to measure body size with drones in collaboration with Dr. Lars Bejder, Director of the Marine Mammal Research Program at University of Hawaiʻi’s Hawaiʻi Institute of Marine Biology. We could also use a drone to actually hover over a whale and collect its breath. And from this we could measure hormones like cortisol to see whether fast life changes—like being defeated by another male in a competitive group —is reflected in changes in stress hormones. So to me that's a very exciting new area of technology that I am curious about adopting.

Another technology is an underwater long-term listening device called a Sound Trap, which we’re putting out along the Hilo coastline of the Big Island (the Hamakua Coast). Most of these types of listening devices have been put in leeward areas like Kona, with very few along areas like Hilo. Though they've been around for a while, this is the first time that we'll be using them off this coast, which has not been explored much systematically for not just the presence of humpback whales, but also toothed whale species, various dolphin species (including spinner dolphins), and other baleen whale species.

And so it's a new world for me to use these technologies and see how far we can go in terms of learning about the critters that are out there.