Data from the satellite tag should help scientists understand what habitats loggerheads use and how to more effectively protect this endangered species. 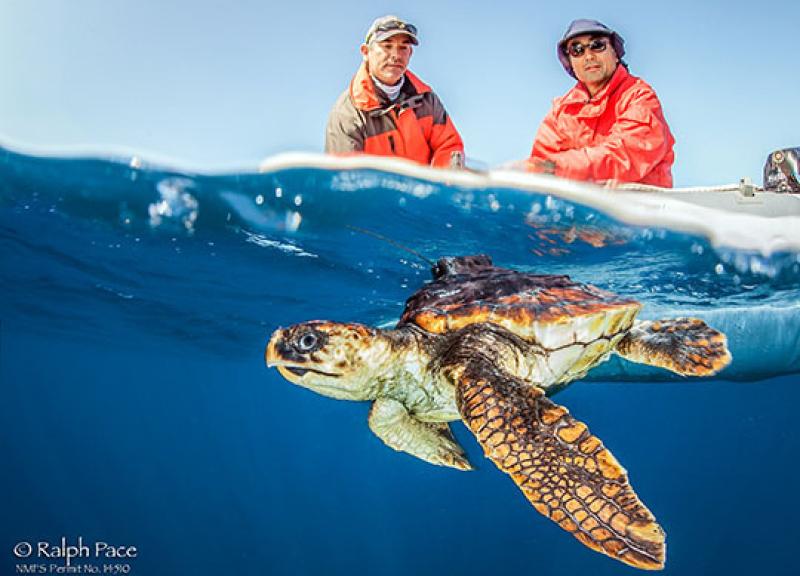 Fifty miles out to sea from San Diego, in the middle of April, under a perfectly clear blue sky, NOAA Fisheries scientists Tomo Eguchi and Jeff Seminoff leaned over the side of a rubber inflatable boat and lowered a juvenile loggerhead sea turtle into the water. That turtle was a trailblazer—the first of its kind ever released off the West Coast of the United States with a satellite transmitter attached.

Once he was in the water, the little guy—“he’s about the size of a dinner plate,” Seminoff said—paddled away to begin a long journey. He’s been beaming back his location ever since.

That location data will help scientists answer some very important questions about this endangered species.

“We know that there are juvenile loggerheads in this part of the Pacific, but they’re small and very hard to spot,” Eguchi said. “So we don’t have good data on what types of habitat they’re using.”

Part of the reason for the mystery is that, although scientists have long been tagging adult sea turtles, the transmitters have only recently been made small enough to attach to juvenile sea turtles. Today, new tagging methods are quickly shedding light on what scientists once called the “lost years”—the early years of a sea turtle’s life when their migration patterns were mostly unknown.

Scientists have known for a while, however, that juvenile loggerheads sometimes use the same habitat as swordfish, especially when the water becomes unusually warm. They know this because loggerheads are occasionally caught in the gillnets used by swordfish fishermen.

To protect the turtles, NOAA Fisheries created the Pacific Loggerhead Conservation Area off the coast of Southern California. When water temperatures rise, or are forecasted to rise, as happens during an El Niño event, managers close that area to the drift gillnet fishery for swordfish. That happened for the first time last summer.

One reason scientists are excited about releasing a tagged loggerhead is that the data it provides might allow managers to fine-tune fishery closures.

“If it turns out that the turtles like different habitat than swordfish, or if they use the same habitat but at different times, then there might be a way to allow fishermen to fish while still keeping turtle hotspots protected,” Seminoff said. “It would be a win-win.”

The pioneering loggerhead sea turtle had been plucked from the ocean a few weeks earlier by a Coast Guard vessel and brought to the Aquarium of the Pacific for medical attention, but veterinarians soon decided that the turtle was healthy and could be released. Scientists took advantage of the turtle’s unlikely detour to outfit it with a satellite tag.

The tag should stay on for 4 or 5 months. As long as it’s attached, people can follow the turtle’s travels on the loggerhead turtle movement map, which is updated several times a day.

The turtle has traveled more than 200 km so far, though it’s still unclear whether the animal is just hitching a ride on the currents or actively swimming. Scientists hope to answer that question as more data come in.

“Either way,” said Seminoff, “that’s a long way for such a little guy.”

Last updated by Office of Communications on June 04, 2018