Fish Out of Water: How Capture Affects Sablefish Health, Reflexes, and Survival

New insight on mortality of sablefish returned to sea will inform sustainable management of a valuable Alaska fishery adapting to change. 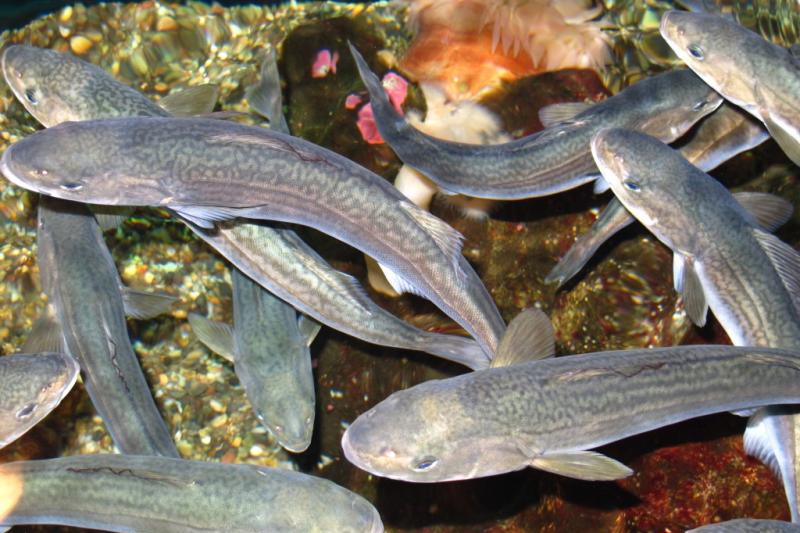 Sablefish is a high-quality, deepwater fish that supports a valuable Alaska fishery. The fishery has seen dramatic changes in recent years. The highest abundance of young  sablefish in decades arrived with warming temperatures. At the same time, a rapidly-growing pot fishery has emerged alongside traditional hook-and-line fishing in the Gulf of Alaska. A new study shows that, with careful handling, they are able to withstand the stresses of capture on hook-and-line gear—but their.reflexes could be impaired.

In the directed sablefish fishery, commercial fishermen must retain all sablefish (regardless of size) until individual fishing quotas are filled. Then, all remaining catch is returned to sea. To accurately assess the fish stocks to set sustainable catch limits, managers need to estimate how many of the fish caught and released will survive.

A new collaborative study provides information essential for sustainable management of  the sablefish fishery as it evolves and adapts to changing conditions. NOAA Fisheries  Alaska Fisheries Science Center scientists teamed up with a veterinary professor at Oregon State University. They looked at how the stress of capture and time out of water affects the health and reflexes of sablefish, and whether that contributes to delayed mortality. Their findings provide a better understanding of mortality after release from pot fishing. They provide information essential for the North Pacific Fishery Management Council to evaluate the implications of proposed “careful release” of small sablefish before fishing quotas are filled.

“These results show us that sablefish are able to withstand the stresses of capture. During this experiment, all fish survived capture on hook and line gear with careful handling. But their reflexes were impaired in ways that could affect their ability to evade predators,” said study leader Cara Rodgveller, NOAA Fisheries Scientist, Alaska Fisheries Science Center. “If fish are not able to orient themselves, hear, or respond to touch, they may not be as skilled at sensing and responding to predators. We also found that being held out of water, as sablefish may be on pot boats, caused reflex issues, but no mortality.”

A Fishery Evolving Under Changing Conditions

With recent warming in the Gulf of Alaska came a sablefish baby boom. Abundances of sablefish born in 2014, 2016, and 2017 were the highest since 1977. While this abundance of young fish bodes well for the future, it’s a problem for fishermen now. Small fish are difficult to avoid, have lower value than large sablefish, and count towards catch quotas.

“Fishermen are frustrated. They are catching too many small fish,” said Cara Rodgveller, NOAA Fisheries biologist at the Alaska Fisheries Science Center. “There is interest in being able to release small fish before the individual fishing quota is filled. It would be good economically because small fish have a lower value per pound.There are also biological benefits such as allowing these young fish to grow, mature, and spawn if they are carefully released and survive."

While fish experience the stress of capture with any gear, fish caught on hook and line are likely to be released quickly at the rail, limiting time out of water. Sablefish caught in pots can spend more time out of water while catch is sorted. That could mean extended exposure to air and heightened stress levels.

Decades of research show that Alaska sablefish can survive capture from depths down to 1,000 meters. However, the best available estimate of mortality for discarded sablefish. (about 12 percent) is based on tagging studies where fish are handled carefully before release. It may not reflect conditions that fish experience during actual fishing operations.

“Our study is a first effort to look at mortality based on stressors that fish experience during commercial pot fishing: being pulled up from depth during capture, and spending time out of water”, said Rodgveller. “We designed the laboratory study specifically to look at how pot fishing might affect them. Also, since release of small sablefish is possible in the future, our study looked at effects on young fish 45-59 centimeters in length.”

The team examined fish not only for mortal trauma, but also for stressors from capture that might lead indirectly to delayed mortality. These might include vulnerability to predation, interfering with feeding,  communication, or reacclimating to depth.

“It is important to understand that even if a fish looks completely healthy, that doesn’t mean it is,” Rodgveller said. “We don’t want to make assumptions about its future survival and success.”

The team captured 35 sablefish using hook and line. They tested six reflexes after capture. These included responses to touch, sound, and changes in orientation. The fish were then transported to the laboratory for further testing.

“One of the most exciting things about this work was setting up this amazing wet lab that we will be able to use for future research,” Rodgveller said. “To mimic natural conditions for these deep water fish, we had to chill water on a mass scale and seal out all light to keep it completely dark. Without that you can’t get close to their natural environment. We worked using red light, which they cannot see. In many ways It’s like being in 600 meters of water.”

The fish were held in the laboratory for several weeks. During that time, some were experimentally held out of water for 3-11 minutes, pushing the maximum time these fish may be on deck on a pot fishing boat. At the end of the experiment, reflexes were tested again. Fish were then examined by Oregon State University veterinarian Christiane Löhr for injury or disease. The team examined fish tissues under a microscope to get a full picture of internal health.

Health and Reflexes After Capture

No sablefish died during capture or while being held during the experiment, and none showed signs or disease. However, reflexes were affected.

“Some of the reflexes were poor, especially just after capture.That could impair their ability to escape predators after release, such as whales that may be near the boat when sablefish are returned to sea,” Rodgveller explained.

“The long-term damage to the sound reflex could affect feeding, communication, and other behavior for a long time,” said Rodgveller. “That could contribute to early mortality in response to being caught and released. If this is true, this needs to be accounted for in our stock assessments.”

Rodgveller emphasizes the need for further research to get a more comprehensive picture of the effects of capture.

“We have just scratched the surface by looking at the effects of capture and isolating one stressor: time out of water. That is just one thing that fish experience while on board. They are subject to pressure from other fish in the pot, being dropped on deck, and others. It will be important to spend time on a boat to study what else they experience. More tests of sablefish responses to fishing conditions will continue to improve our understanding of discard mortality in this evolving fishery.”