To improve fish passage, Cape Fear River Watch and partners have made a series of upgrades to a fishway originally designed to mimic natural river habitat. 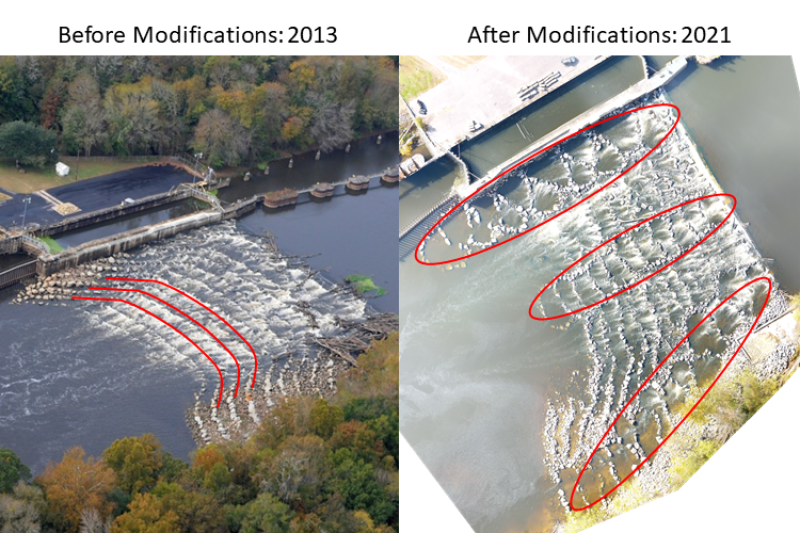 Aerial view of the original nature-like fishway at Cape Fear Lock and Dam Number 1 in 2013, and the modified nature-like fishway in 2021. The red lines indicate the rock arches constructed below the crest of the dam structure. The red circles indicate the staggered pools which form three pathways through the fishway. Credit: U.S. Army Corps and Cape Fear River Watch.

The original nature-like fishway was designed to mimic natural habitats in the fall zone of the Southeast U.S. where changing geology causes rivers to shift from fast to slow-flowing through a series of rapids. This was accomplished by arranging rows of large stones and grading the rows to gradually slope away from the crest of the dam structure (see red lines in “before” photo). The design preserves the upstream pool created by the dam structure. It allows species such as American shad, blueback herring, and Atlantic sturgeon to continue safe and effective passage upstream and downstream.

After the original fishway was completed in 2013, researchers conducted acoustic telemetry (a method that uses sound to track the movement of animals, especially in water) studies to determine its effectiveness. They demonstrated that 70 percent of the American shad that approached the dam successfully navigated the fishway and moved upstream. However, only 26 percent of striped bass successfully passed the barrier and continued their upstream migration. Partners agreed that there was still more room for improvement.

Now, the updates to the existing design will further improve fish passage for striped bass and other migratory fish species. Partners added a series of three river-parallel fish pathways across the left, central, and right sections of the existing rock arch rapids (see red circles in “after” photo). Each fish pathway consists of a series of staggered pools that run the length of the rapids and further reduce the slope of the existing rock arch ramp. This design improvement makes it easier for fish to move upstream. Additionally, three small notches were cut into the concrete dam structure at the crest of the dam above the three fish pathways. The increased flows through these notches will attract fish through each new pathway. A combination of increased attraction flows from the notches, wider gaps in the fish pathways, and deeper resting pools further mimic natural rapids. These features will help improve fish passage through the rock arch ramp.

Researchers are currently conducting two studies in the Cape Fear River Basin to assess the success of the redesigned fishway. One study will track the fine-scale movement of striped bass and American shad within the rock arch ramp, both before and after the modifications. In a second study, researchers are tracking the movements of adult Atlantic sturgeon below the nature-like fishway, and monitoring the area downstream for sturgeon born within the past year. 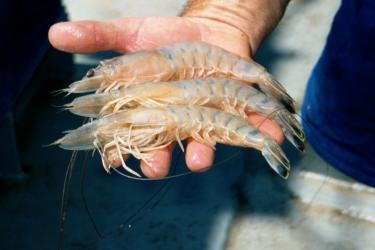 Last updated by Office of Habitat Conservation on June 02, 2022