Despite an extreme bottleneck that nearly decimated the Redfish Lake sockeye population in the early 1990s, the captive broodstock program retained 95% of the population’s genetic diversity. 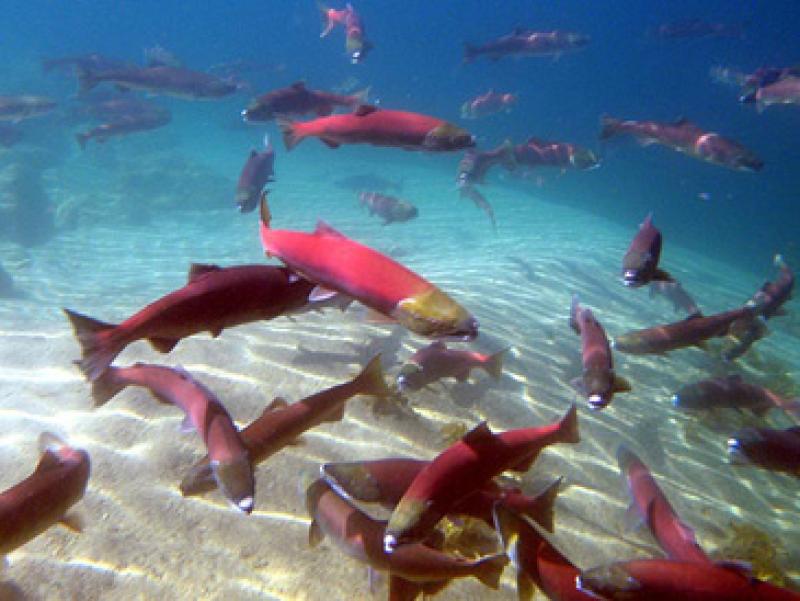 Captive propagation is widely used to manage small populations. However, its short term goals of avoiding complete extinction of the gene pool and conserving as much genetic diversity as possible — without compromising prospects for long-term survival of the species — is a tall order.

How effective was the nearly 20-year captive breeding program in that regard for the critically endangered Redfish Lake sockeye population? NWFSC scientists Don Van Doornik and Robin Waples, together with lead author Steven Kalinowski (previously at NWFSC, now with Montana State University) and Christine Kozfkay of Idaho Department of Fish and Game, developed a study to find out — and their results were surprising.

The study, published in the journal Conservation Genetics, reveals that the captive broodstock program maintained a high proportion of the genetic diversity of the 99 “founders” that spawned in captivity starting in 1991. Using a pedigree analysis to evaluate changes in genetic variation from 1991 to 2008, scientists estimated that the captive breeding program retained 95% of the genetic diversity of the founding population over the 5.5-generation period. That same year of 2008, scientists counted the highest number of adult returns to Redfish Lake in 50 years.

The authors acknowledge that other factors may ultimately decide the fate of Redfish Lake sockeye, such as the effects of hatcheries, hydropower development, and global climate change. However, they are also optimistic that its high level of genetic diversity may be enough to avoid most of the harmful effects of inbreeding and to provide enough genetic variation for the population to adapt to future challenges.

Before the extensive development of hydropower in the region, thousands of sockeye completed an annual migration of over 900 miles from the Pacific Ocean up the Columbia and into the Snake River. The epic journey took them to their natal stream and spawning grounds, Redfish Lake in Idaho’s Sawtooth Mountains, at over 2,000 meters elevation. Today, eight dams stand between the returning adults and their spawning ground. The dams create hurdles for salmon migrating upstream; they also have more insidious effects, slowing the flow of waters that once carried young salmon downstream to the Pacific Ocean in about two weeks. Currently, the trip takes much longer and there is concern about the physiological state of the fish when they reach the ocean.

In May of 1991, the population of Redfish Lake Sockeye hovered on the brink of extinction following the failure of any anadromous adults to return in 1990. The dire situation galvanized regulatory and stakeholder groups, resulting in the Redfish Lake Sockeye Captive Broodstock Program, a multi-agency and tribal endeavor. Initiated to protect population genetic structure and to prevent the further decline of Idaho sockeye salmon, the program pools the expertise and efforts of NOAA and the Idaho Department of Fish and Game along with several collaborators including the Bonneville Power Administration, the Oregon Department of Fish and Wildlife, and the Shoshone-Bannock Tribes of Idaho.

In the NOAA/IDFG-developed captive broodstock technology, fish are reared in specialized freshwater and marine systems to ensure high survival and production of eggs, smolts, and pre-spawning adults. The salmon that are produced must be healthy and capable of surviving and reproducing in the wild. In the course of the program’s development, technology improved, and novel techniques emerged. For example, Center scientists collaborated with colleagues at the University of Maryland to advance the spawning time of the captive spawners using a hormone commonly used to treat infertility in humans. The technique improved the production of juvenile fish.

The end of the millennium saw the beginning of success for the captive broodstock program with the first return of adult Redfish Lake sockeye salmon in 1999. In the following year, over 250 sockeye from the program completed the 900-mile journey from the ocean to the lake.

As a result of these efforts and other conservation measures that have been implemented (such as screening irrigation diversions), in 2010, a record number of 1,355 adult sockeye salmon returned to Redfish Lake — a level that has not been seen in over half a century. For the fourth year in a row, captive broodstock production has resulted in over 150,000 outmigrating smolts. This increase in returns can help stabilize the population until other factors leading to their decline can be more fully addressed. The innovative captive broodstock program exemplifies the science-based tools NOAA is using to recover ESA-listed stocks of Pacific salmon.