Northwest Fisheries Science Center scientists and partners show that eDNA is just as effective in tracking threatened Chinook populations as casting nets into the water to catch the fish swimming by. 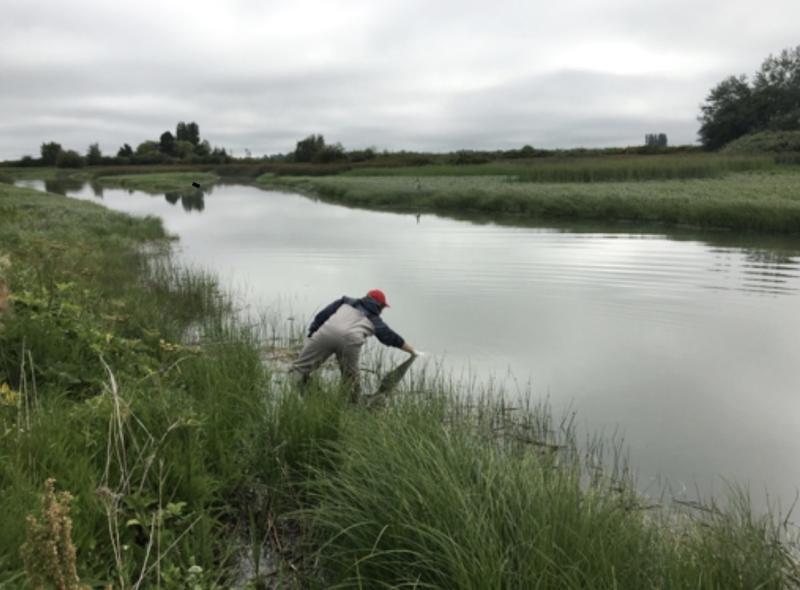 Fish and wildlife constantly shed bits of genetic material into the surrounding environment. This environmental DNA (or eDNA) can be collected and analyzed to determine which species have recently visited a location.

Now scientists at NOAA Fisheries’ Northwest Fisheries Science Center, the University of Washington, and the Skagit River System Cooperative have shown that eDNA is just as effective in tracking threatened Chinook populations as casting nets into the water to catch the fish swimming by. The finding, published in Conservation Biology, is an important validation of eDNA as a tool for assessing the size and movement of fish populations.

eDNA: A New Type of Net

Scientists collected environmental DNA by dipping 1-liter bottles into the Skagit River and estuary. Then they analyzed the samples for the DNA of Puget Sound Chinook salmon. They simultaneously cast seine nets to collect fish in certain areas. They found that eDNA analysis identified the state of the population as well as seine net sampling -- and sometimes even more accurately.

“What we found was that eDNA is a powerful tool for assessing populations of threatened animals that are otherwise difficult to trace,” said research scientist Andrew Shelton of the Northwest Fisheries Science Center and lead author of the new research. “At the population level, eDNA and seine surveys produced virtually identical information.”

That means that scientists can reliably use eDNA to assess the movement and habitat use of threatened and endangered fish populations. Scientists can use eDNA to examine and assess fish populations at a much lower cost than netting fish individually. There are tradeoffs, however. For example, eDNA does not provide some information that netting does, such as the age and size of the salmon detected.

Exploring the Possibilities of eDNA

Scientists at NWFSC are also exploring the use of eDNA to assess the reach of salmon populations in the ocean. They have shown in tests that eDNA results match up to when a research vessel nets salmon in the area. They have also shown that it is possible to detect killer whale DNA from water collected behind killer whales. It can also distinguish the type of killer whale, such as the endangered Southern Residents.

NOAA Fisheries is investing in the emerging genomics field as a way to enhance the agency’s science capability. At the NWFSC, science teams are examining the potential for eDNA to support population surveys for Pacific hake off the West Coast, an important commercial fishery. Currently, the ship-borne surveys for hake use a mix of trawling and acoustic echo sounders. This year, the survey has added sampling from an autonomous sail drone and eDNA analysis to test different methods for estimating the abundance of hake. Accurate stock assessments for hake help fisheries managers determine how many fish can be caught.