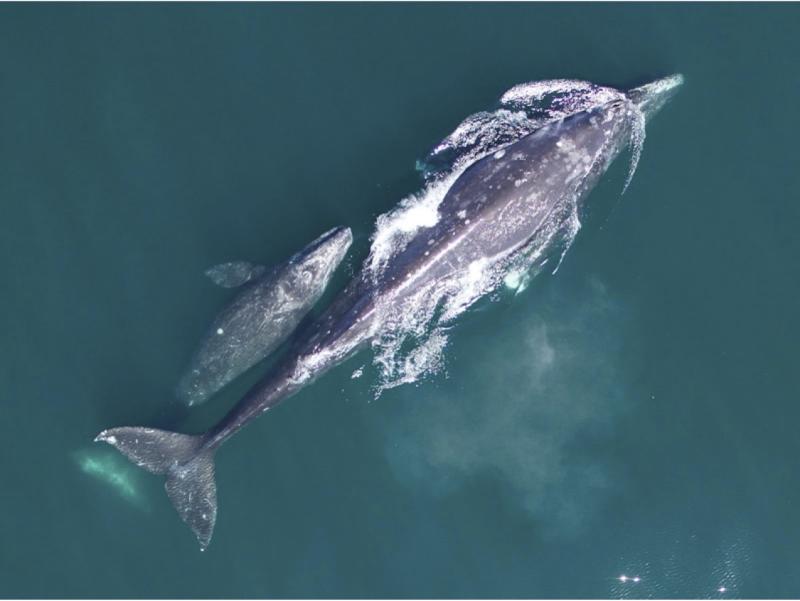 A gray whale mother calf pair migrating along the central California coast from the wintering grounds in Mexico to the summer feeding grounds in Alaska. Credit: NOAA Fisheries

Gray whales that migrate along the West Coast of North America continued to decline in number over the last 2 years, according to a new NOAA Fisheries assessment. The population is now down 38 percent from its peak in 2015 and 2016, as researchers probe the underlying reasons.

The population also produced the fewest calves on record this year since counts began in 1994, an accompanying report explains.

The 38 percent decline from a peak of about 27,000 whales in 2016 to 16,650 this year resembles past fluctuations in the eastern North Pacific population. Researchers at the Southwest Fisheries Science Center said it warrants continued close monitoring. Population counts for eastern North Pacific gray whales are typically conducted over the course of a 2-year period. However, NOAA Fisheries will add a third year counting gray whales that pass along the Central California Coast to this survey, from late December to mid-February 2023.

“Given the continuing decline in numbers since 2016, we need to be closely monitoring the population to help understand what may be driving the trend,” said Dr. David Weller, Director of the Marine Mammal and Turtle Division at the science center. “We have observed the population changing over time, and we want to stay on top of that.”

An increase in gray whale strandings led NOAA Fisheries to declare an Unusual Mortality Event for the population in 2019, prompting an investigation into the likely causes. That ongoing investigation has identified several likely contributors. These include ecological changes in the Arctic affecting the seafloor and the amphipods, and other invertebrates living in and above the sediment and in the water column, that gray whales feed on each summer, according to new research published earlier this year.

Some gray whales may have struggled to find food amid those shifts, said Dr. Sue Ellen Moore, a University of Washington researcher who leads the UME team assessing ecological influences. She noted that gray whales feed on a wide variety of prey over an enormous range, so there could be many variables affecting how, when, and where they find food.

While many of the roughly 600 dead whales recorded from 2019 to 2022 appeared malnourished, some did not. Some stranded whales had clearly died of other causes such as getting hit by ships or predation by killer whales. The number of strandings initially spiked in 2019 but then fell in subsequent years. That suggests that most of the gray whale population decline probably occurred in the years shortly after the UME was declared.

“There is no one thing that we can point to that explains all of the strandings,” said Deborah Fauquier, Veterinary Medical Officer in NOAA Fisheries’ Marine Mammal Health and Stranding Response Program, who coordinates the UME investigation. “There appears to be multiple factors that we are still working to understand.”

Gray whales are known for their visible migration along the West Coast each year. The population has fluctuated widely before, including a similar drop of roughly 40 percent from the late 1980s to the early 1990s. The population later rebounded to a new high point. Gray whales in the eastern Pacific Ocean are fully recovered from the days of commercial whaling, and were removed from the list of endangered species in 1994.

A similar spike in strandings led to the declaration of an earlier Unusual Mortality Event in 1999 and 2000, when the population declined by around 25 percent. It later climbed back to a peak in 2015–2016. (While Table 1 in the report includes a higher estimate for 2014–2015, that number was less precise, so scientists rely on the 2015-2016 estimate.)

Most gray whales migrate between feeding grounds in the Arctic during summer and lagoons in Baja Mexico in the winter where they nourish their newborn calves. This annual roundtrip of more than 10,000 miles exposes them to many stressors along the way. A small group of gray whales also spends the summer feeding along and around the Pacific Northwest Coast.

The population has likely always fluctuated in response to changes in its environment, without lasting effects, said biologist Dr. Tomo Eguchi, lead author of the new NOAA Fisheries reports on the whale population abundance and calf production. “The population has rebounded multiple times from low counts in the past,” he said. “We are cautiously optimistic that the same will happen this time. Continued monitoring will determine whether and when they rebound.”

NOAA Fisheries researchers track the numbers of gray whales in the population by counting southbound whales heading for Mexico. They monitor calf production by counting mothers and calves migrating north each spring from lagoons in Baja California, where some whales give birth. The most recent count that concluded in May estimated the total calf production this year at about 217. This number was down from 383 calves last year and the lowest since the counts began in 1994.

Like the gray whale population as a whole, the number of calves born each year has also fluctuated. Low calf counts were recorded for periods of 3 to 4 years at a time before rebounding. Two of the three prior periods of low calf production have coincided with Unusual Mortality Events and declines in the population. This suggests that the same factors that affect gray whale survival likely also affect their reproduction, the report on calf numbers concludes.

Aerial photographs of gray whales in the lagoons in Mexico showed declines in the body condition of many adult whales, underscoring that connection. “Depending upon the age of the whales, this lower body condition may have led to delayed reproduction and lower calf counts, and/or reduced survival in thin whales,” scientists reported.

In December, teams will begin the next count by training binoculars on whales migrating south past Granite Canyon, just south of Monterey Bay in California. “What we hope to see in the next few years is that the abundance stabilizes and then starts to show signs of increase,” said Dr. Aimee Lang, a coauthor of the new reports. “We will be watching closely.”