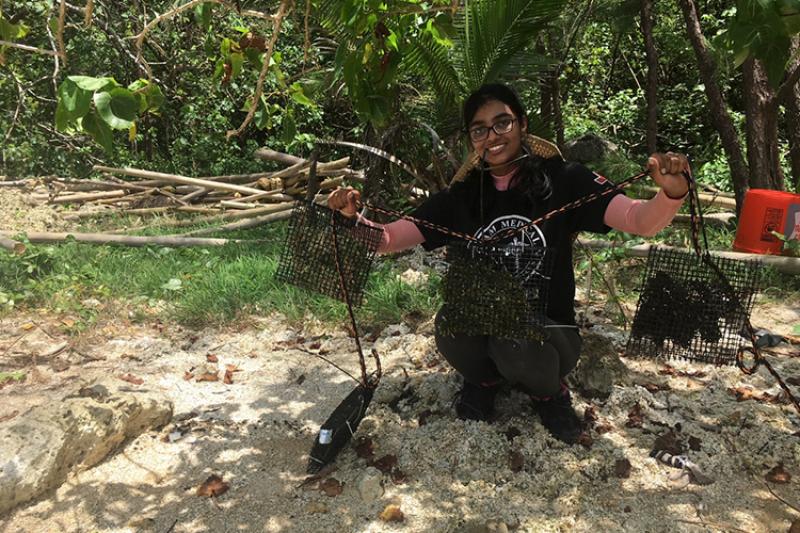 Students who participated in the 43rd Annual Guam Island Wide Science Fair this year got a chance to win an award only offered a few times before: a marine science internship under the tutelage of a scientist from the University of Guam (UOG) Marine Laboratory.

This award is made possible thanks to a grant from the NOAA Fisheries Pacific Islands Regional Office and a partnership with the University of Guam and Guam Science and Discovery Society. It is highly coveted. Students who compete in the fair are all aware of the award, and those who have won it strongly recommend it to other students.

“Participating in this research internship was one of my most eye-opening experiences of high school,” a former student commented in a post-internship survey. “I think that this program offers valuable tools and networking opportunities to any STEM aspirant, regardless of their research interests.”

The two students who won this year’s internship award are Miwa Gudmundsen and Felix Gong.

Miwa’s science fair project focused on cyanobacterial growth in one of the watersheds in southern Guam. During her internship at the UOG Marine Laboratory, she is researching temperature stress in corals.

Felix’s science fair project investigated using a nuisance algae as biofuel. He is researching morphological characteristics of staghorn coral species around Guam during his internship at the UOG Marine Laboratory.

Cultivating an Interest in Marine Science

The science fair is the single largest academic student competition in the region. Approximately 500 students from Guam participate each year. This makes the science fair the ideal place to reach students for the internship. And connecting with these students is critical—both to nurture their scientific interests, and to build marine science capacity in the region.

“All of our communities throughout the [Mariana Islands] region are greatly underrepresented in the sciences,” said Dr. Frank Camacho, a UOG associate professor of biology and principal investigator of the internship project.

Some high schools have marine science programs that engage students in thinking about a career in the field. However, many students don’t realize the importance of other science and math courses in obtaining a marine science degree, according to Camacho.

“Our students are coming in [to UOG] really excited to do marine science, but then they hit that barrier of getting through general chemistry, math, or physics,” he said.

Camacho added that while the internships can’t tackle systemic science education issues, they can help cultivate an interest in marine science. The internships also provide valuable skills students may not be getting in high school, such as training in microscopy techniques and data and statistical analysis.

For example, one past internship awardee conducted a project in which she investigated the life history of rabbit fish, a culturally important fish in Guam, at the UOG Marine Laboratory. She learned how to dissect the fish and remove its otoliths, or ear bones. Then she used the otoliths to estimate the fish’s age. She found that Guam’s rabbit fish may live up to 6–7 years—vital information for fishery managers.

Importantly, students who receive the internship award are not necessarily the top students or winners of the science fair. Camacho and his co-principal investigators—Dr. Austin Shelton from UOG Sea Grant and Dr. Leslie Aquino, a UOG associate professor of mathematics—also look for students who demonstrate potential and could blossom with a little bit of mentoring.

One such student wanted to do research on remote sensing with drones.

“His science fair project was intriguing,” Camacho said, “but it was clear that with a little bit of mentorship, we could cement that student’s interest in pursuing this career.”

During his internship, the student completed a zonation project in which he used drones to obtain remote footage of mangrove forests.

Ultimately, the team hopes the internship will encourage students to pursue a marine science career in Guam, helping to build capacity for marine science in the region.

The primary goal, however, is to first get them interested in science. So far, UOG has awarded 10 students internships since 2016, with encouraging results. About half of the students who went through the internship pursued a STEM degree in college (the rest are still in high school). And one college student is currently participating in a summer research internship at the Hawai‘i Institute of Marine Biology at Coconut Island, Oʻahu. He plans to return to Guam to pursue a doctoral degree in marine science after graduation.

As the first set of interns now graduates from college and tackles new challenges, the program is tackling challenges of its own. According to Camacho, UOG has no funds to award new internships beyond this year or to track interns into the future. Yet, he remains hopeful.

“We are hoping that there is some way that we can build upon the successes that we have already started to see from the previous interns that have participated,” Camacho said. “We really do think that this program is transformative.”