Each spring and fall, the Northeast Fisheries Science Center conducts a bottom trawl survey in federal waters from Cape Hatteras to the Canadian border. Some areas, like the rocky bottom habitats in the Gulf of Maine, require a special approach. 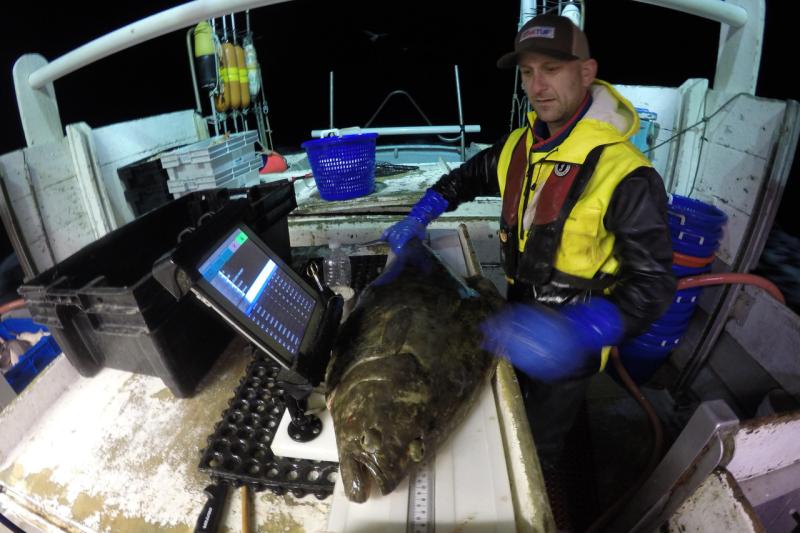 Abundance, distribution, age, and other data are vital for assessing and managing important fish species. To obtain these data, we work with commercial fishing vessels to conduct annual spring and fall bottom longline surveys in the Gulf of Maine.

The longline survey uses random stratified sampling to detect the abundance and distribution of fish species and how they are changing over time. It focuses on areas where researchers know less about some species and the rougher terrain makes it harder to sample with trawl gear. 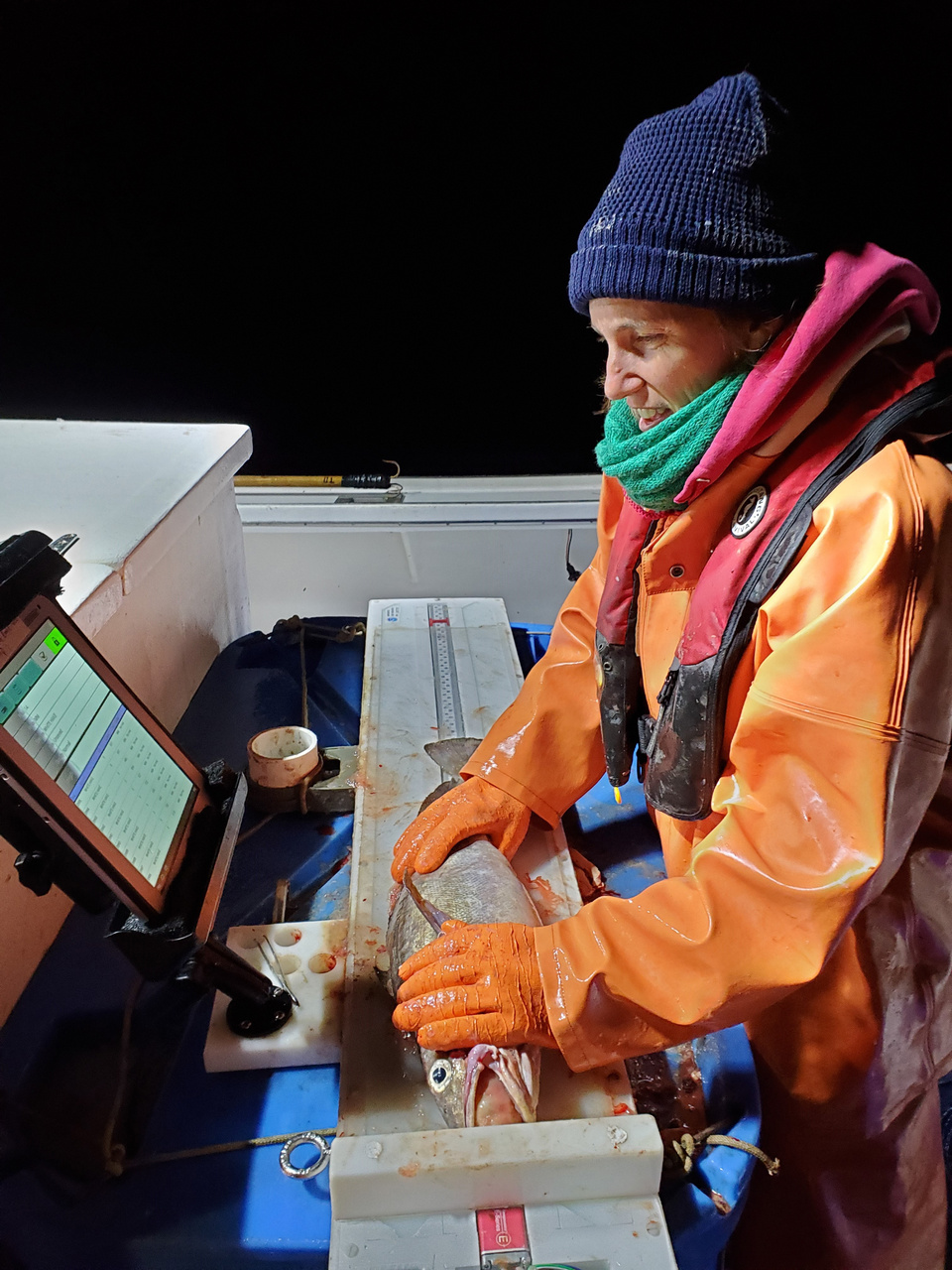 The team spent several days this fall staging the 50-foot F/V Mary Elizabeth in Scituate, Massachusetts and 40-foot F/V Tenacious II in East Dennis. In a little more than 3 weeks, they completed the planned 45 stations on November 2, in a typically breezy New England autumn.

Weather was also on their side in the spring. On May 7, they had completed the 45 stations in the survey in about 2 weeks. To take advantage of the limited fair weather windows that occur during seasonal transitions, each vessel makes multiple 2–4 day trips. 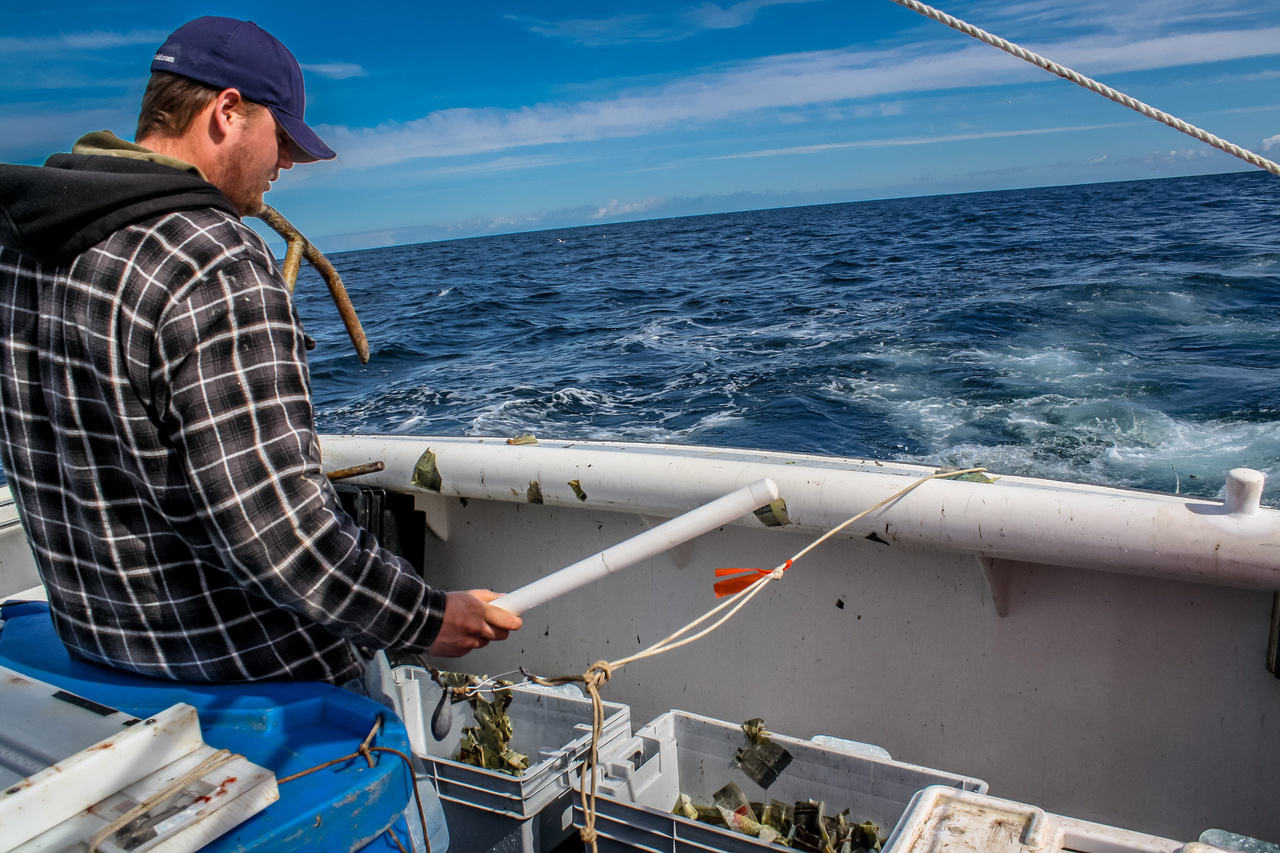 Crew member Dan Deane about to release the tilt current meter enclosed in a white PVC pipe as the longline gear is deployed. Photo: NOAA Fisheries

What did they catch in the fall? Mostly spiny dogfish mixed with haddock, cusk, white hake, Atlantic cod, red hake, pollock, and skates. Many survey stations require staff to weigh hundreds of pounds of fish and measure them for length. The team also collected hundreds of age and maturity samples from:

Unusual catches included porbeagle and blue sharks. Most sharks were tagged before being released. The team also tagged some thorny skates to support a study conducted by the Anderson Cabot Center for Ocean Life at the New England Aquarium.

The center has conducted the Gulf of Maine longline survey each spring and fall since 2014, using tub-trawl bottom longline gear to target fish. As with the bottom trawl survey, the staff randomly chooses stations from within the strata defined by area, depth, and bottom type. Including structured bottom types allows us to gather data in areas that are difficult to survey with trawl gear, which can get hung up on rocks.

The longline survey has several similarities to the Center’s long-running bottom trawl survey. The gear length for both surveys is one nautical mile and they occur around the same time of year.. The longline’s 45 sampling stations are distributed over six of the same areas. This makes it easier for analysts to use the longline survey data along with that collected in the bottom trawl survey. 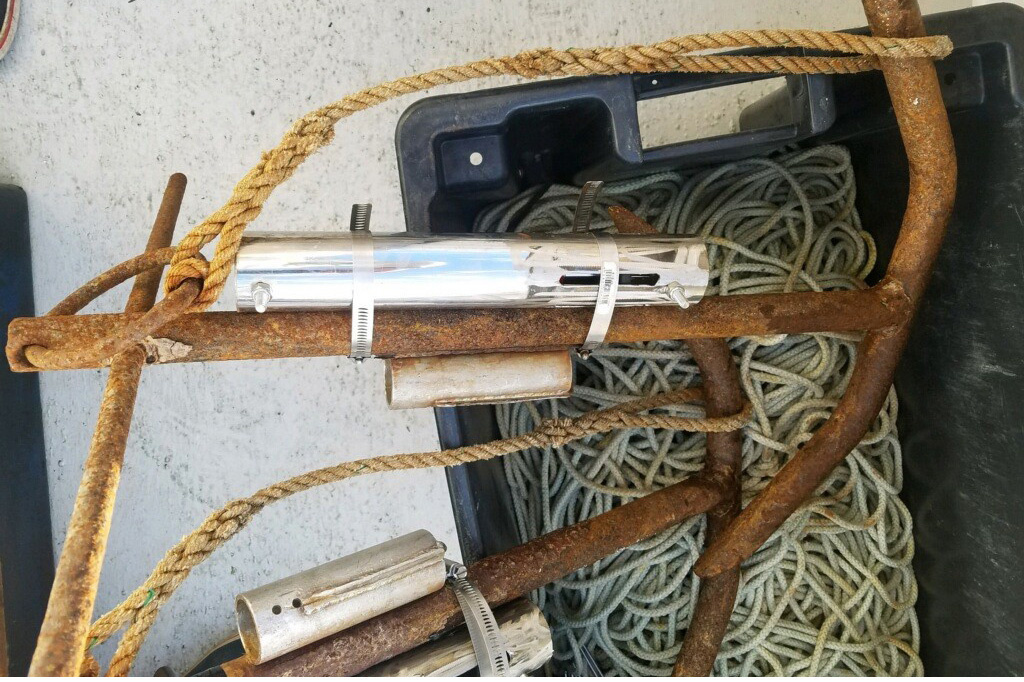 A temperature probe in a metal housing is attached to the anchor for the longline gear. Photo: NOAA Fisheries

Center analysts compare longline results to the bottom trawl survey for species such as cod, haddock, and white hake. The longline survey operates in areas where bottom trawl gear may not perform optimally. For that reason, the longline information shows us if there are larger fish in those areas that the trawl doesn’t fully detect. If the trawl is underestimating the catch of larger fish, the stock assessment model can be adjusted accordingly. We also develop indices from the longline survey that may provide additional information in the assessment models.

The longline survey also collects environmental data. This fall, we incorporated new temperature-depth instruments, mounted on the anchors at each end of the bottom longline gear. The end of each line has a tilt current meter with an accelerometer and a compass. This instrument measures current velocity near the ocean bottom. A drop camera system takes short habitat videos at each station to document the substrate type.

Once center staff completed fall field work, they focused on data entry, auditing, and analyses over the winter months. The 2020 spring survey will begin in April.