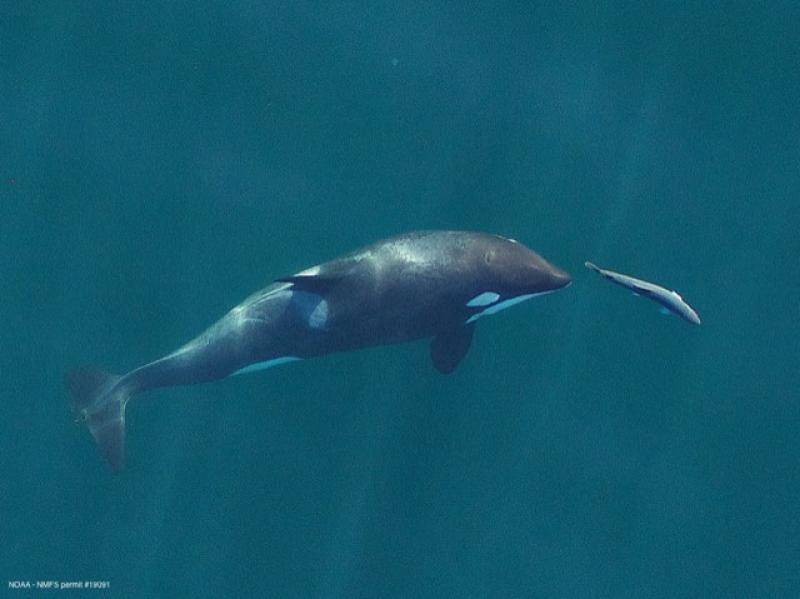 Increased abundance of salmon in the inland waters of the Salish Sea increased the odds of endangered Southern Resident killer whales capturing salmon as prey, but increased speeds of nearby boats did just the opposite, according to new research findings.

The research was led by NOAA Fisheries’ Northwest Fisheries Science Center. It found that the orcas descended more slowly, and took longer dives to capture prey, when nearby boats had navigational sonar switched on. The sonar from private and commercial vessels directly overlaps the main sound frequencies the whales use to hunt. This may mask the whales’ signals and force them to expend more energy to catch prey.

“That suggests that it may prolong their effort to dive in search of prey, which like all marine mammals they have to do on a breath hold—so they can stay underwater only so long,” said Marla Holt, research wildlife biologist at the Northwest Fisheries Science Center and lead author of the new research. Researchers used suction-cup tags that record whale movements and sound to track and analyze their behavior and use of sound to hunt.

Earlier research found that the faster nearby vessels traveled, the greater noise the endangered killer whales experienced. That could help explain why higher speeds of nearby vessels were associated with reduced odds of the whales capturing prey. Faster vessels might also seem more unpredictable to the whales, possibly distracting them as they close in on prey, Holt said.

“Consequences of reduced food intake include negative impacts on the whales’ ability to meet their energetic requirements to support key life functions, including growth and reproduction,” the scientists wrote in the new research paper published in the journal Marine Environmental Research.

Threats Compound Each Other

The findings illustrate the overlapping nature of threats to the endangered killer whales. NOAA Fisheries and partners are investing in restoring habitat for the Chinook salmon the whales prey on, and increasing production at fish hatcheries to supplement salmon abundance. However, actions to reduce vessel traffic and noise are also needed so that the whales can find and capture those fish.

“There isn’t one easy solution to recover the whales,” said Lynne Barre, recovery coordinator for the Southern Residents in NOAA Fisheries’ West Coast Region. “We need to be looking at the multiple threats from all different angles.”

State and federal vessel regulations help reduce the vessel traffic and noise that can disrupt the normal behavior of the killer whales, Holt said. She served on the vessels working group of the task force appointed by Washington Governor Jay Inslee to examine the threats to the whales and potential solutions. Washington adopted new vessel regulations implementing recommendations from the task force and adopted a licensing program for commercial whale watching. Regulations in Washington State also limit vessel speed within a certain distance of killer whales.

NOAA Fisheries is also reviewing vessel regulations at the federal level to determine if further changes are necessary. Other advances such as the development and increasing use of a whale warning flag can also help reduce impacts. Flying the flag alerts fellow boaters that whales are nearby so they can slow down. Be Whale Wise guidelines also recommend turning off echosounders near whales when safe to do so.

That guideline for echosounders may be especially important, the new research indicates. The devices used to measure depth with sound signals, often at 50 kHz, directly overlaps the central echolocation signals the whales use to hunt. Researchers recorded echosounder signals on about half of the more than 100 killer whale dives they analyzed.

The whales made longer dives and descended more slowly when nearby vessels emitted echosounder signals. This could possibly reflect the signals masking their own use of sound or the distraction of vessels and the sound that they produce.