How to get DNA from a Dolphin

A scientist at the NOAA Fisheries National Systematics Lab studies dolphins by analyzing their DNA. But first, she has to get their DNA. 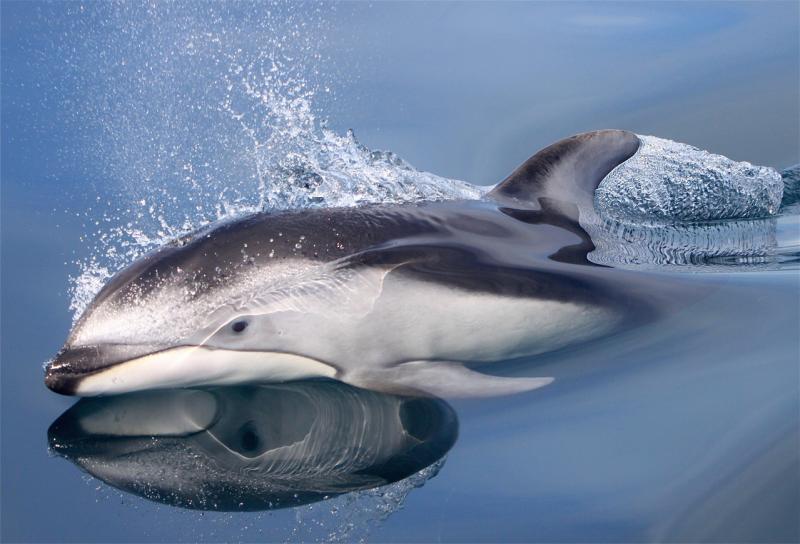 Nikki Vollmer leans over the side of the boat, aims, and launches a biopsy dart at a fast-moving target. It hits its mark then bounces off, carrying a small plug of skin and blubber.

Vollmer is studying white-sided dolphins, which travel in groups of hundreds or even thousands, leaping and twisting as they come up for air. There are two species—one in the Atlantic and one in the Pacific—and she's using their DNA to identify different breeding populations within them. For that she needs more than one sample. She needs hundreds, and they have to cover the widest possible geographic range.

“I love going into the field, but fieldwork is expensive,” Vollmer said. Finding enough samples from enough locations will be the toughest part of her job.

Identifying Populations Can Be Key to Protecting the Species

Vollmer is a post-doctoral researcher whose work is funded by NOAA Fisheries, and her research will help the agency better protect these species. White-sided dolphins aren't endangered, but they are protected under the Marine Mammal Protection Act, and they face many threats. They can be caught in fishing nets, injured by ships, exposed to pollution, and harmed by industrial activity, and they are vulnerable to natural events such as disease outbreaks and prey shortages.

If a small, vulnerable population is faced with these threats, protecting them would help preserve the genetic diversity of the species. Large populations spread over a wide area, on the other hand, are much less vulnerable and may not require the same degree of protection.

“We can’t say if there’s one big population that stretches from New York to England, or if there are many smaller ones,” said Vollmer of the Atlantic species, though she is working in the Pacific as well. “I’m hoping to fill that information gap.”

She's doing that at the NOAA Fisheries National Systematics Lab, housed in the Smithsonian Institution’s National Museum of Natural History in Washington, DC. There, hidden away behind the tourist-filled exhibits, is the Smithsonian’s cutting-edge facility for genomics research—the Laboratories of Analytical Biology. They call it the LAB, and scientists there use DNA analysis to study the tree of life. The NOAA Fisheries scientists stationed among them study the evolutionary relationships among marine organisms, from corals to shellfish to sharks.

To study marine mammals, Vollmer uses techniques similar to those used in a criminal forensics lab. But, whereas a crime lab is interested in an individual suspect, Vollmer looks at how closely each sample matches all the others. If there are multiple breeding populations, her DNA samples will cluster into groups with distinct genetic profiles.

The more samples she gets and the greater their geographic range, the more certain her results will be. Which brings us back to the problem of getting enough samples.

The specimen collections at the Smithsonian once filled only dusty cabinets and formaldehyde jars. But today the Smithsonian is home to one of the largest natural history biorepositories in the world, where cryogenic freezers preserve more than 350,000 animal and plant tissue samples.

Help From Colleagues Around the World

She's also been getting the word out, telling everyone she knows in marine mammal science about her quest. "You need a lot of friends in this business," she said. "Fortunately people have been very willing to help."

Colleagues on both coasts of the United States and Canada have sent her samples, many from animals that stranded on a beach years ago. Unfortunate as those cases are, much of what we know about marine mammals in the wild—from their diet, to their age at sexual maturity, to the environmental contaminants in their blood—comes from post-mortem examination of stranded animals.

But despite the many samples that Vollmer has found, one geographic area remains stubbornly unrepresented. Atlantic white-sided dolphins have historically been seen in the Labrador Sea between Canada and Greenland. But despite reaching out to colleagues and searching the frozen archives, Vollmer has yet to find a single tissue sample from this area.

Or maybe it’s time to break out the biopsy darts again. This summer she’ll be heading to Canada to do just that.