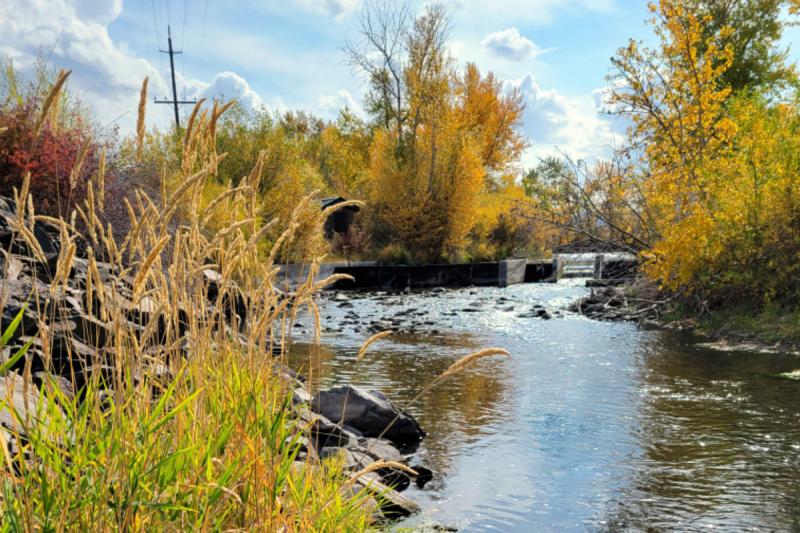 Along the Lemhi River in central Idaho, water is essential to farming and ranching that dominates the mountain valley. It is also vital to the recovery of threatened Snake River Chinook salmon and steelhead that once returned to the Lemhi by the thousands.

In what may have been the hottest, driest year on record, water brought them together in 2021.

A stretch of the Lemhi River would go dry each year without voluntary, market-based agreements with landowners. They agree to restrict the delivery of their water for 100 days to keep it in the rivers and streams for salmon. The annual and permanent agreements are between water users and the Idaho Water Resource Board. Recently the agreements have been funded in large part by electric ratepayers of the Bonneville Power Administration.

Typically, they start in July. In 2021 they started in April. “I never thought I’d see that happen,” said Amy Cassel, manager of the Idaho Water Transactions Program. “I could not believe how severe the drought became, and just how quickly it became so severe.”

An almost absent snowpack, dry soils, little precipitation, and extreme heat combined to shrink the water supply just when salmon needed it most. The state water program had agreements with landowners for about 3 months annually. There was no way that would be long enough. “We knew it was going to take something unprecedented to get through the summer,” said Chad Fealko, fisheries biologist with NOAA Fisheries West Coast Region in Salmon, Idaho, who has worked on salmon recovery throughout Idaho. He wants to see the fish coexist with agriculture.

The Lemhi has been a focus of salmon recovery in the Columbia River Basin for more than a decade. Hard work by locals and funding from BPA, the Pacific Coastal Salmon Recovery Fund, and conservation interests have reopened tributaries. Salmon and steelhead now use these areas to spawn and juveniles grow there before heading to the ocean. The funds have helped restore streamside habitat, enhancing its value to fish in strategic locations throughout the sub-basin.

Landowners have helped make it happen. Water conserved by improved irrigation practices, and agreements not to divert, now goes to fish during key parts of the life cycle.

Studies have found more fish in the restored reaches. There are also early signs that more juveniles are rearing in the Lemhi for longer periods of time. Increased capacity and juvenile survival are essential steps towards recovery. That could mean more adults returning to spawn in a few years—if the river and ocean cooperate.

The rapid and severe drought that stressed the Lemhi in 2021 put all that at risk.

Then local landowners and recovery partners stepped up like never before to keep the rivers and streams flowing, Fealko said. He credits the collaboration of Cassel, watermasters, local fish and wildlife biologists, state agencies, and others. They have built longtime support for the water purchases through communication and trust. BPA provided extra funding to extend the annual agreements in 2021, successfully obtaining water for the fish.

“Without the benefit of relationships cultivated for decades, the Lemhi would have been dry, maybe for months,” Cassel said. “That is just the reality of where things are.”

At the same time, many irrigators in the Lemhi absorbed water shortfalls themselves, since the available flows could not fulfill all the water rights that landowners held. The most senior rights get water first. When it runs out, those with junior rights get none. “Many irrigators sacrificed way more than they have had to before,” Cassel said.

Kim Thomas was one of those compensated for leaving some of his water for fish. He said he tries to make the most of higher water volumes in spring to irrigate thoroughly, yet his alfalfa yields still declined. “It’s how you use your water and how you take care of it that helps make it go farther, whether for the crops or for the fish,” he said.

The kind of stresses that struck the Lemhi last year may become more frequent, even common, as climate change affects the Columbia Basin in sudden and unexpected ways. The kind of relationships and resources that supported water purchases for fish in the Lemhi could also be in increasing demand across the Basin.

NOAA Fisheries began the Columbia Basin Partnership in recognition that salmon recovery in the Columbia Basin depends on common goals that go beyond saving endangered salmon and steelhead. The Partnership also developed broader goals for healthy, sustainable salmon returns that support tribal fisheries, commercial fisheries, and sport fisheries. It also recognizes other longtime land and water uses across the Basin.

“We worked hard in the Partnership to form lasting relationships and understanding because that is the only way we will reach meaningful recovery in the long term,” said Michael Tehan, Assistant Regional Administrator in NOAA Fisheries’ West Coast Region. “We tend to look at the next year or two immediately in front of us, but the truth is that what we saw in the Lemhi last year may become more of the rule rather than the exception.”

The outlook for 2022 is better but not great. Snowpack has been near average for the last 30 years. But even an average year of precipitation will not fully offset the lingering effects of last year’s extremely hot and dry conditions.

The critical state of river flows in the Lemhi reflects the challenge of maintaining salmon habitat in tributaries of the Snake River. Agencies have improved salmon survival through federal hydroelectric dams on the lower Snake and Columbia Rivers. However, those actions benefit fish only if there is healthy river habitat to support spawning and juvenile rearing before fish migrate through the dams to the ocean.

That rearing habitat limits survival of many Snake River salmon and steelhead populations, and the Lemhi is one place where restoration actions are making a difference. As long as the water keeps flowing.

“We sort of breathed a sigh of relief when things came together and people stepped up last year, but now we’ve got to be thinking, not just about next year but the decades beyond,” Fealko said. He hopes that the collaboration that got the valley through the last tough year proves to be lasting and helps establish long-term solutions for the Lemhi’s salmon and steelhead as well as its ranchers. Added Cassel, “I don’t see this as a one-off year.”