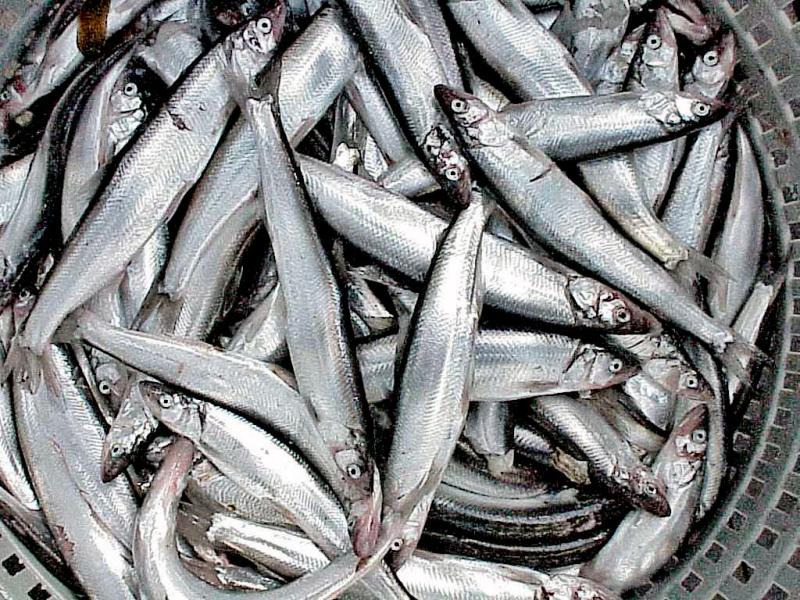 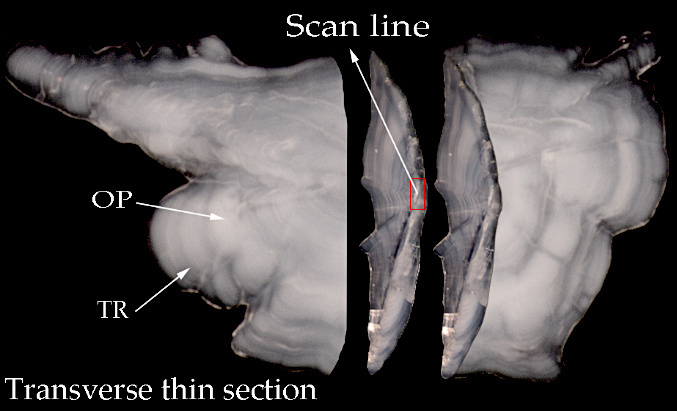 A eulachon otolith precision-cut to reveal a slice of history. A laser is used to analyze chemicals along the scan line. Opaque zones (OP) typically represent summers and good feeding, and translucent zones (TR) winters.  Red rectangle marks approximate location of the core of the otolith.

NOAA Fisheries scientists are developing cutting-edge techniques to age eulachon, a key forage fish, by reading the history recorded in its ear stones.

The eulachon is a little fish that plays a big role in the ecosystem, history, and culture of northwest North America. But in recent decades populations have declined dramatically over much of its range. Age data are crucial to accurately assess stocks and sustainably manage this vital prey species.

Despite its importance in the ecosystem, the eulachon has been little studied compared to many commercially fished species. Currently there is no established method to age eulachon.

“Otoliths hold a record of what a fish has been exposed to—kind of like a flight recorder. A timeline of environmental events is written in the layers of each otolith, clues to the age of the fish,” explains Irina Benson, who is leading the project. “We’re learning to read that story.”

Eulachon are so rich in oil that a dried fish burns with a steady flame, earning one of its aliases. This high-fat content gives the little eulachon an oversize role in the ecosystem. Marine mammals, salmon, seabirds, eagles, and bears all forage on this high-energy food source. People once relied on it for survival, and the eulachon and its oil remain an important part of Native culture.

Eulachon runs swelled coastal rivers from northern California to the Bering Sea when the fish returned from sea to spawn in freshwater each spring—until the 1990s, when nearly all spawning runs suddenly dwindled. In the Columbia River, once site of the largest eulachon fishery, populations dropped by as much as 98%. Canada and Alaska populations later showed signs of recovery, but those south of the Canada border were listed as threatened under the Endangered Species Act in 2010.

To effectively manage fish populations, we need to understand their age structure. That begins with knowing how to find the age of an individual fish. 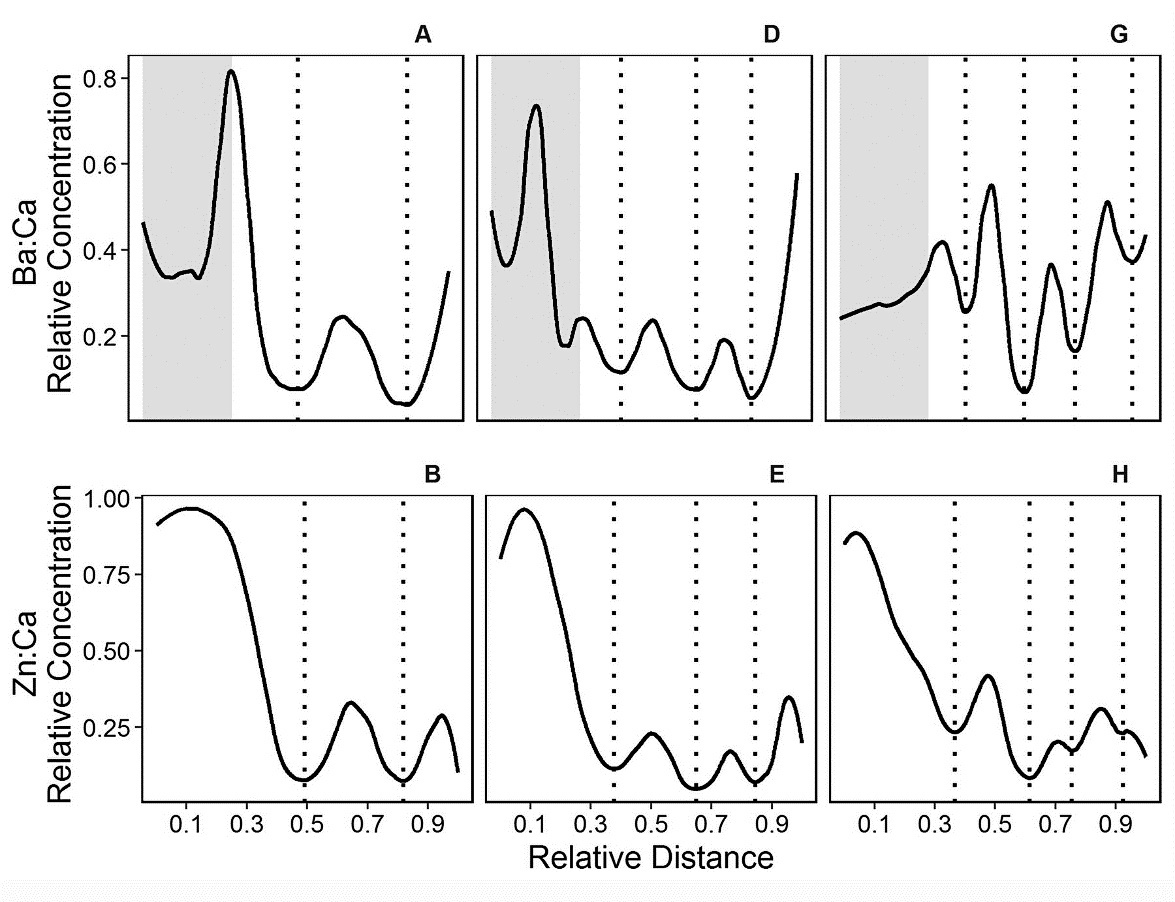 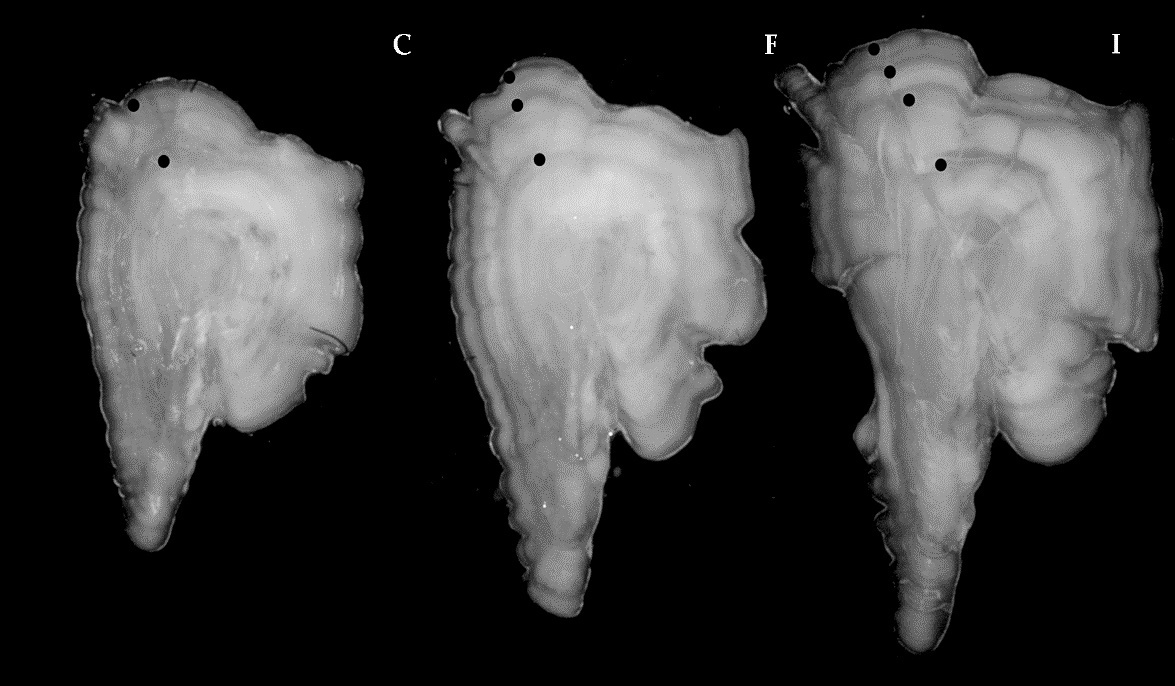 Chemical signatures in their otoliths reflect environmental events experienced by typical 2, 3, and 4-year-old eulachon from the Bering Sea. Vertical dashed lines on the elemental signature plots correspond to black circles on the otolith images below.

Otoliths are small structures in a fish’s head that help with hearing and balance. Layers are added to the otolith over the fish’s lifetime, forming growth rings, like those on trees. By counting annual rings, scientists can determine the age of a fish. This is standard procedure for ageing many species.

With eulachon, the challenge is to figure out which rings are annual. Eulachon otoliths are small and difficult to handle and interpret. Each has many rings, and not every ring represents a year.

But each ring holds clues to the conditions the fish was exposed to when that layer was formed. If scientists can decode those clues, they can deduce the fish’s age.

“Seasonal events like sea ice melt, river runoff, and coastal upwelling leave a chemical signature in the layers of the otolith. Trace elements associated with those events are incorporated into the otoliths through either the surrounding water or diet,” Benson explains. “By identifying those signatures, we can figure out how many seasons a fish has lived through.”

Benson’s work expands on previous research, which found that the element barium in otoliths reliably indicated eulachon age. The authors suggested that annual peaks of barium in otoliths were caused by summer upwelling of barium-rich deep water. Benson’s study covers a broader geographic range and explores the possibilities of several other elements as proxies for environmental events.

Benson’s team found evidence of where each eulachon lived, how long it lived, and what it lived through, all in the rings of its otoliths.

They accomplished this using laser-ablation inductively-coupled plasma mass spectrometry to measure elements in the otoliths along a continuous track from the core to the edge. This work was completed at the W.M. Keck Collaboratory for Plasma Spectrometry at Oregon State University.

The scientists were able to predict with 75% accuracy which of the three study regions a eulachon lived in. The Bering Sea population was distinguished by elements associated with sea ice melt; Oregon Coast population with seasonal coastal upwelling events. The Gulf of Alaska signature was most difficult to interpret.

Based on annual patterns in these signatures, the team found that most eulachon examined were 2-3 years old, with a maximum lifespan of 5 years.

Benson cautions that these ageing criteria are not yet ready for use in stock assessments, but are still exploratory.

“It’s like putting together the pieces of a puzzle,” Benson says. “Geography, chemistry, geology, physics, oceanography, biology – all the subjects you learned in school come into it. Then once you’ve got all the clues lined up, it’s detective work. That’s the most exciting part.”