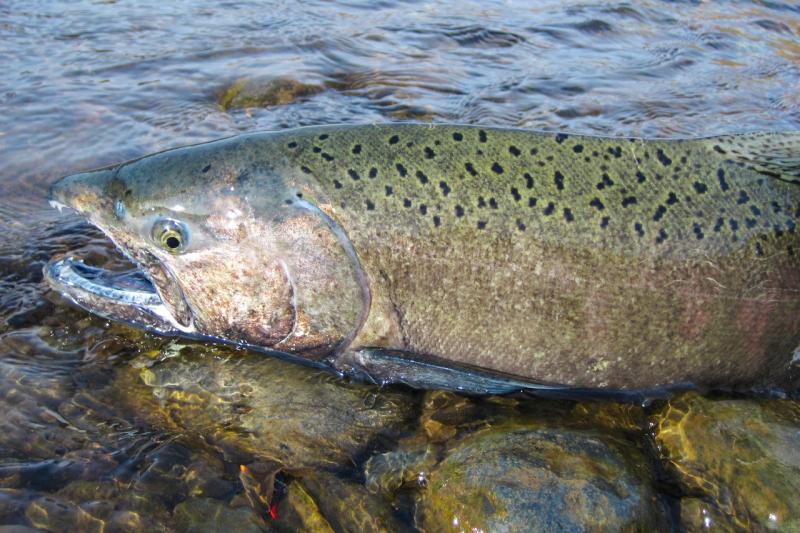 NOAA Fisheries has released 5-year reviews for seven salmon and steelhead species in the Interior Columbia Basin protected by the Endangered Species Act. The reviews found that species in the Snake River and upper and middle Columbia River should retain their current listing statuses. However, climate change increases the urgency of recommended recovery actions. These include further improving passage through hydropower dams, restoring tributary and estuary habitat, controlling predators, and modifying hatchery practices.

The comprehensive recovery actions will help improve the resilience of the species to climate change, the reviews said.

The review of Snake River spring/summer-run Chinook salmon signaled an “increased level of concern” for the species based on declining population trends and climate change impacts. It called for further review if that trend continues. The review recommended additional habitat restoration. Research indicates that at least 20 percent of floodplain and side-channel habitat in a watershed must be restored to support a 25 percent increase in surviving salmon smolts.

The review of upper Columbia spring-run Chinook salmon reports that all three populations of the fish have declined over the last 5 years by an average of 48 percent. Low survival in the ocean was a major factor, but the reviews describe impacts in freshwater, too.

These are the first of 28 reviews of West Coast salmon and steelhead species that NOAA Fisheries West Coast Region will release in the next several months. The Endangered Species Act calls for a review of listed species at least every 5 years to determine if their listing status remains accurate or should be changed. The reviews also provide a report card on recovery, as outlined by each species’ recovery plan. They identify the most critical threats to the species, and recommend key actions that can yield the greatest improvements in their odds for recovery.

“It is a snapshot of how the species have done in the last five years and how they are faring overall at a critical time,” said Michael Tehan, Assistant Regional Administrator for the Interior Columbia Basin. “We are seeing the impacts of climate change play out, which demonstrates the urgency of moving the most critical recovery actions ahead now. The takeaway message is that we cannot wait.”

Upper Columbia River spring-run Chinook salmon and Snake River sockeye salmon are among the most endangered salmon on the West Coast. Both face high extinction risk, according to viability assessments completed by the NOAA Fisheries Northwest Fisheries Science Center. Snake River fall-run Chinook salmon are listed as threatened, which remains accurate, and face moderate-to-low extinction risk. Current trends for this species are encouraging. There is a need to better understand some key population parameters. If recent actions prove to be as effective as predicted and current trends continue, Snake River fall-run Chinook salmon could be removed from the list of species protected by the Endangered Species Act, known as delisting.

“Fall-run Chinook salmon are a bright spot that reflect the hard work that tribes and states have put into their recovery,” Tehan said. “We know what the species needs and we have been able to apply that.”

Snake River spring/summer-run Chinook salmon are also listed as threatened but with a moderate-to-high extinction risk.

The survival of the species over the tough conditions of the last 5 years reflects their resilience, Tehan said. However, climate change poses a tougher test that will require more ambitious recovery actions to support the species.

The Columbia Basin Partnership, convened by NOAA Fisheries, agreed in 2020 on a vision for the basin and a range of goals for all Columbia Basin salmon and steelhead. The Partnership’s low-range adult abundance goals were consistent with ESA delisting. However, its mid- and high-range goals went substantially further, to provide for healthy, harvestable stocks. The Partnership also noted a sense of urgency to act now to achieve its goals, recognizing that it could take decades to ultimately achieve them.

NOAA Fisheries recently worked with the U.S. Fish and Wildlife Service, Oregon, and the Nez Perce Tribe to develop a draft assessment of what it will take to achieve the CBP’s mid-range goals. Those goals go far beyond the standard for recovery as defined by the Endangered Species Act and as evaluated by the 5-year reviews. The draft Rebuilding Interior Columbia Salmon and Steelhead Report outlines steps that would make a big enough difference for the species to promote their return to the harvestable levels outlined by the Partnership. NOAA Fisheries is currently seeking input on the draft Rebuilding Report from the other tribal and state fisheries co-managers in the Basin.

Recovery plans for these species say that additional improvements in survival through the hydrosystem are necessary. They do not explicitly call for breaching the lower Snake River dams, nor do the 5-year reviews analyze breaching the dams.

Read the full 5-year reviews for each of the seven Upper Columbia and Snake River species.