Unknown whale with a distinctive call does not match previously known species. 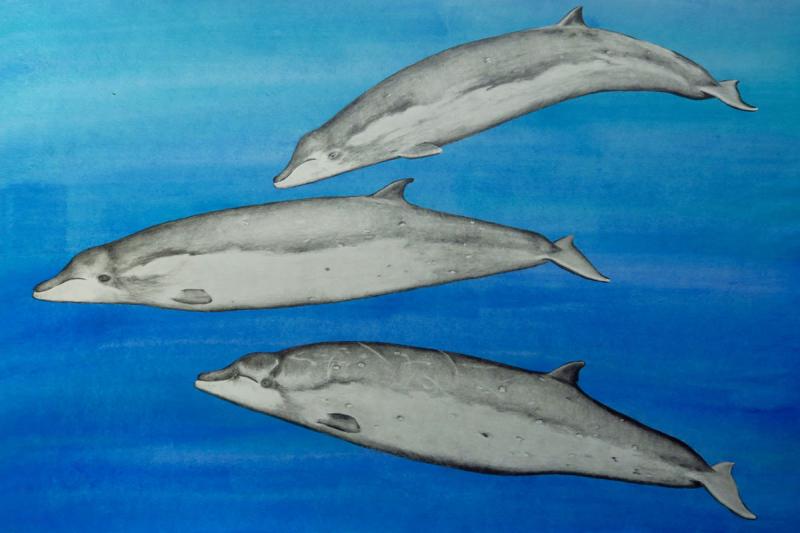 The unique color and body shape of the beaked whales sighted off Mexico late last year did not match any known species, suggesting they may be a new form of beaked whale. Illustration by Barbara Taylor.

An international team of researchers identified what may be a new species of deep-diving beaked whale off the west coast of Baja California in November 2020. Their report recently published in Marine Mammal Science.

Beaked whales spend most of their time at great depths, often exceeding 1,000 meters, more than 3,200 feet. They surface perhaps once an hour for a few minutes at a time. Late last year, the researchers were searching about 50 miles offshore for Perrin’s beaked whale, which is known only from stranded carcasses and a distinctive underwater sound. Then one morning in November near dawn, three unidentified beaked whales surfaced. It lingered near their vessel, R/V Martin Sheen, of the Sea Shepherd Conservation Society.

They recognized the whales were not Perrin’s, and at first were disappointed. Then they realized the whales may not be known at all. The unique color patterns and body shape did not match any known species.

“We had all the guidebooks of known whales and we crossed them off, one after another, until we were not left with anything,” said Jay Barlow, a research scientist at NOAA’s Southwest Fisheries Science Center in La Jolla, California. “We don’t know what it is.”

The scientists quickly deployed acoustic recorders to capture underwater sound. They collected water samples near the whales in hopes of identifying bits of their DNA in the water. Genetic or physical evidence of the whales, such as a skull, would also be necessary to confirm it is a new species.

“This has been an interesting year for beaked whale sightings,” said Lorenzo Rojas-Bracho, a researcher in Mexico’s National Commission of Protected Areas. “It is clear that the Baja California Peninsula and the waters off the coast of California are important beaked whale areas. This research shows how cross-boundary collaboration is key to the research and conservation of these intriguing whales.”

“It is frustrating to not yet have all the data we need, but exciting that we have an opportunity to gather it,” said Elizabeth Henderson, a bioacoustic scientist with the U.S. Navy and coauthor of the new research. The Navy provided funding for the research trip and for a return visit to the area in the fall, while Sea Shepherd provided the vessel and crew.

What appeared to be a male in the group had a tooth protruding from the middle of its jaw, a distinguishing characteristic of beaked whales that helps scientists with species identification. Floating acoustic recorders detected the unique sound of the animals, which resembles a short chirp, within a roughly 100- by 300-mile area off the west coast of Baja.

“They must be small in number, or they would have been found before,” Barlow said. The scientists are also reviewing prerecorded acoustic data from Southern California to determine whether the whales may have been detected but misidentified as a known species.

Beaked whales are thought to prey mainly on deep-water squid. The squid face few threats or predators at such depths and are likely slow-moving and therefore easy targets.

“They’re specialists,” Barlow said. “They have found a way to make a living that apparently works well for them and is in keeping with their behavior.”

The research team plans to examine museum specimens of similar beaked whales in case they were originally misidentified and may match the possible new whale. They also plan to revisit the area off Baja later this year in hopes of collecting a small tissue sample from one of the animals for genetic analysis.

Researchers have identified three new species of beaked whales in the last three decades, in some cases after they had already become familiar to whalers or field naturalists. Perrin’s beaked whale is thought to live off Southern California but has never been documented alive. It was identified only through genetic analysis of carcasses first thought to have been a known species.

“Based on this recent history, more beaked whale species may be awaiting discovery and are likely to be recognized in the field before they are formally described,” the scientists wrote.