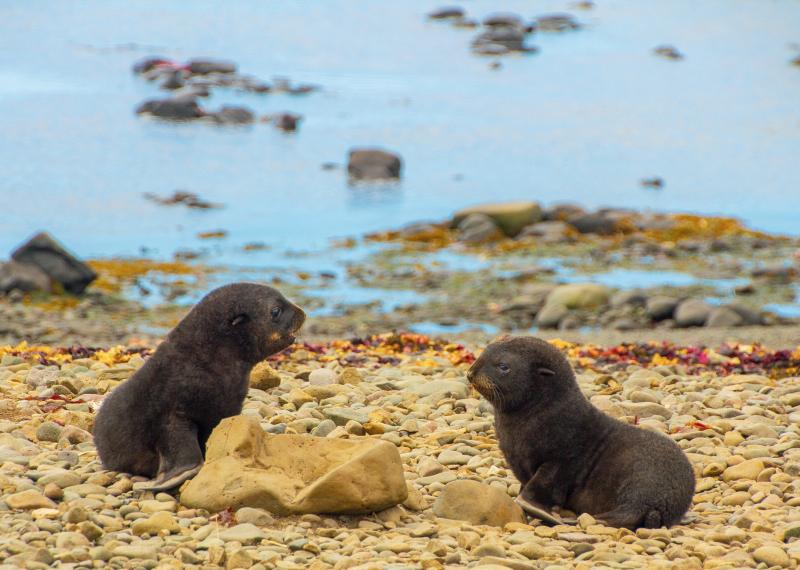 Research biologist Douglas Krause has studied fur seals in Antarctica for more than 20 years. As leader of pinniped studies in the Antarctic Ecosystem Research Division at NOAA Fisheries Southwest Fisheries Science Center, he and many colleagues thought they knew how climate change would affect the photogenic fur seals that are a key species in the Antarctic ecosystem.

They figured that the fur seals would benefit from warmer temperatures and habitat that would emerge as sea ice melts along coastlines. The species should flourish, they thought, a winner in the climate change lottery that affects different species in different ways.

The reality turned out to be just the opposite.

Krause and his colleagues recently published a new study showing that the fur seal population in the South Shetland Islands of Antarctica is declining sharply, especially at its largest colony on Cape Shirreff. The population faces greater risk from climate change and predation than fur seals elsewhere in the Southern Ocean. The population is aging, with fewer females giving birth to fewer pups each year.

The South Shetland Islands fur seal population also stands out for another reason, though. Recent genetic research showed that the population’s DNA provides diversity that may benefit the whole species. Losing that diversity will undermine the resilience that all Antarctic fur seals need to adapt to a future of climate change.

“One of the things that struck me about this study is that this is an example of unexpected outcomes of climate change,” said Krause, who first visited Antarctica as an officer in the NOAA Corps. “As recently as 2010, experts in the field thought that climate change would benefit Antarctic fur seals, because melting ice would provide more habitat and would reduce stress from their extremely cold environment. In just a few short years, we learned that, in fact, the opposite is true.”

The research illustrates that climate change may surprise even the most experienced scientists. What may have seemed predictable and even obvious based on their knowledge of ecological interactions may be off base in an era of unprecedented change.

“This is a reminder that as climate change affects ecosystems, the wildlife interactions that drive them may change fundamentally in ways we cannot anticipate,” Krause said. “We have to be ready for what we think will happen and, it turns out, even what we don’t think will happen.”

He hopes that the international organizations that oversee species and fisheries in Antarctica will take note of the unanticipated findings. They could determine that the South Shetland Islands population needs extra protection, given its genetic value.

A Bloody History and a Steady Recovery

More than 100 years ago, hunters nearly drove Antarctic fur seals to extinction for their coveted fur. By the late-1800s, once-abundant fur seals were scarce around the South Shetland Islands. However, small populations survived in secluded areas of the islands that were inaccessible to hunters.

The surviving populations of fur seals in the South Shetland Islands—at Cape Shirreff and the tiny islands around it— grew rapidly over the next century. Early researchers thought fur seals moving south from the island of South Georgia—more than 1,000 miles northeast—contributed to the rapid growth. 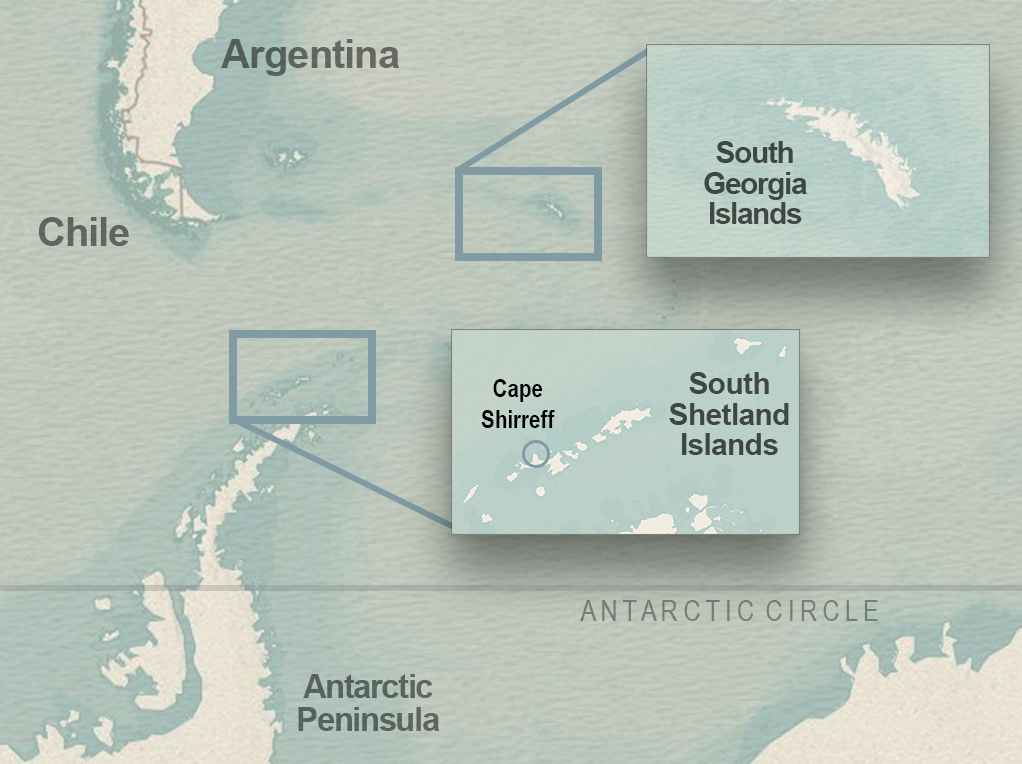 But recent genetic studies tell a different story. After hunting ended, fur seals in the South Shetland Islands recovered on their own. Limited breeding between these fur seals and the ones in South Georgia further reduced the amount of genetic overlap between these two populations, leaving them genetically distinct. The high levels of genetic diversity provided by the South Shetland Islands population may be a key to survival for all Antarctic fur seals in a warming world.

Krause likens this genetic diversity to a biological toolbox. “If you have a certain set of tools within a given population, every individual is going to have a different subset of those tools. Genetic diversity within a species provides an array of tools that, at the population level, fur seals have available to them to respond to rapid changes in the environment.”

A Population in Peril

Krause used more than 20 years of data on population counts, body size and condition, reproduction, survival, foraging, and mortality. He uncovered alarming trends in the trajectory of the Cape Shirreff population. The trends may put the entire species at risk if their habitat continues to warm.

Krause estimates that since 2007, the number of fur seals at Cape Shirreff has decreased by 86 percent. The few pups born each year and their mothers face an uphill battle to keep the pups alive long enough to contribute to the population themselves.

Whether a pup survives largely depends on two things: what fur seals eat, and what eats fur seals.

The main food for fur seals during the summer breeding season is Antarctic krill. Historically, krill were abundant around Cape Shirreff. But over the next several decades, climate change — warming ocean temperatures and declining sea ice—may reduce the amount of krill around the South Shetland Islands. Less krill puts fur seals in greater competition with other seals, baleen whales, and the fishing industry. Without abundant krill readily available close to their breeding beaches, fur seal mothers are already having to travel farther to find food.

Long foraging trips present two problems for fur seal mothers trying to nurse their pups. First, mothers use a lot of their energy swimming to find krill. When they eventually return to the beach, they have less energy to give to their growing pups in the form of milk. Second, while mothers are gone, their pups are left alone on the beach.

Unattended pups are easy pickings for an increasing population of leopard seals at Cape Shirreff.

As their icy habitat melts away and they compete for krill, an increasing number of leopard seals—large female seals in particular— feed on fur seal pups at Cape Shirreff. Krause estimates that leopard seals have eaten almost 70 percent of pups born at Cape Shirreff each year since 2010.

Leopard seals may appear to be the villain in this story. While they have sharply reduced the Cape Shirreff fur seal population, Krause stresses that leopard seals are also struggling with effects of climate change. “We know that these big adult females that are feeding on fur seal pups are mothers that are just trying to survive,” said Krause. “They’re an ice-dependent species that has lost their key habitat, they’ve most likely just raised a pup, they’re most likely pregnant again, and they’re trying to recover their fat stores to survive the winter and support their new pup. They’re just trying to make the best of the situation.”

Cape Shirreff’s southern location puts it closer to the dwindling ice habitat of leopard seals than other fur seal populations. For hungry female leopard seals, high-calorie fur seal pups close to home are the meal ticket they need to survive and successfully give birth the following year.

Although the Cape Shirreff fur seal population is less than 5 percent of the species as a whole, its collapse may have devastating consequences for all Antarctic fur seals. “Because seals were hunted and we ended up with these populations that survived in remote locations, those populations provide especially high genetic diversity,” said Krause. “The South Shetland Islands population is two orders of magnitude smaller than the South Georgia population, but it has a similar amount of unique genetic diversity. If we lose the fur seals in the South Shetland Islands, then we would lose all the genetic tools they have to help the whole species adapt fast enough to these rapid changes in the environment.”

Krause and his colleagues are drafting a document to propose that the International Union for Conservation of Nature list the South Shetland Islands fur seal population as critically endangered. Included on the IUCN’s Red List, critically endangered species are considered threatened with global extinction. The Commission for the Conservation of Antarctic Marine Living Resources (CCAMLR), which manages the Antarctic krill fishery, could use that designation to set conservative catch limits for krill in areas where fur seals forage.

“Since the results of this study are so concerning, we have to take note and highlight them for CCAMLR so that they have the science they need to consider limiting the fishing impacts on fur seals in that area,” said Dr. George Watters, Director of the Antarctic Ecosystem Research Division and a co-author on this study.

Although Krause is worried, he remains optimistic that people will see the value in protecting Antarctic fur seals. “Fur seals are a large, charismatic animal that represents the wildness, the extremeness, and the beauty of Antarctica in a really powerful way, and we want to work toward doing everything we can so they don’t disappear from the landscape.” 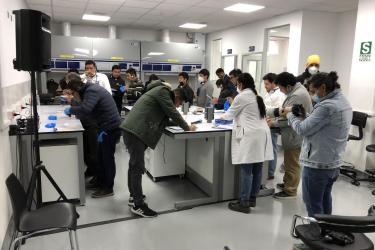 Last updated by Southwest Fisheries Science Center on May 16, 2022