Monk Seal of the Month: September 2017 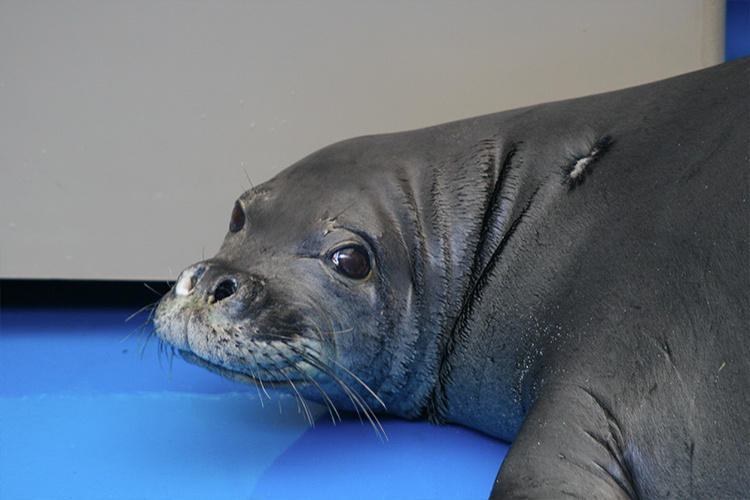 Notable Facts: As a young adult, he began aggressively harassing and/or injuring pups and was brought into permanent captivity in 2012 to help improve the survival of the immature seals. He is currently participating in physiology studies at Long Marine Lab in Santa Cruz, California.

Born in 2002, this Kure Atoll native started life as a typical youngster. By the age of three he had expanded his range, exploring further from home and frequently visiting Midway Atoll, located about 60 miles (95 km) away. Compared with monk seals living at the more isolated locations in the Hawaiian archipelago, such as Laysan Island and the French Frigate Shoals atoll, it's common for seals in the northwestern end of their range — Kure Atoll, Midway Atoll, and Pearl and Hermes Reef — and the main Hawaiian Islands to island hop. 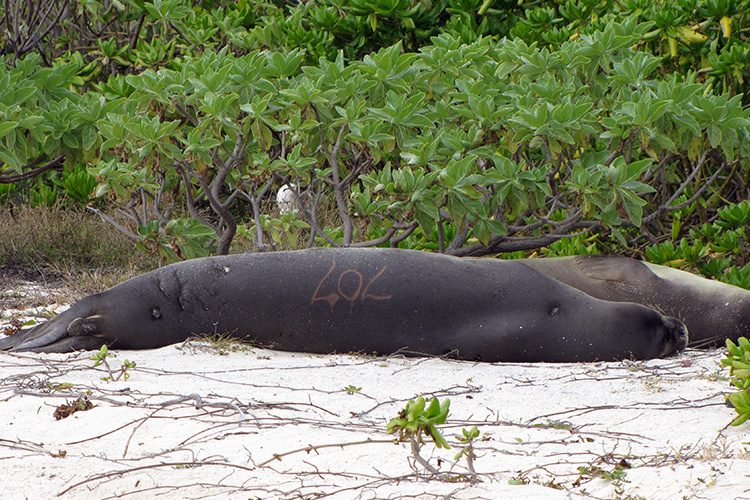 However, KE18 started to behave badly by the time he reached young adulthood in 2010. He sought out weaned pups and juvenile seals and would aggressively bite and even hold them underwater while attempting to mate with them. This behavior is called "single male aggression" to distinguish it from "multiple male aggression," which we discussed in last month's monk seal story.

In many seal species, sub-adult males commonly rough-up or engage in "practice" mating behavior with younger, smaller seals. But this behavior can sometimes lead to injury and death of the victims, an alarming outcome in seal species with small populations, such as the endangered Hawaiian monk seal. That is, a single male Hawaiian monk seal can kill enough youngsters to have a serious effect on the overall population, which is not the case in seal species with population sizes in the hundreds of thousands or even millions. So when it does happen, researchers and conservation managers do what's necessary to stop the dangerous behavior. 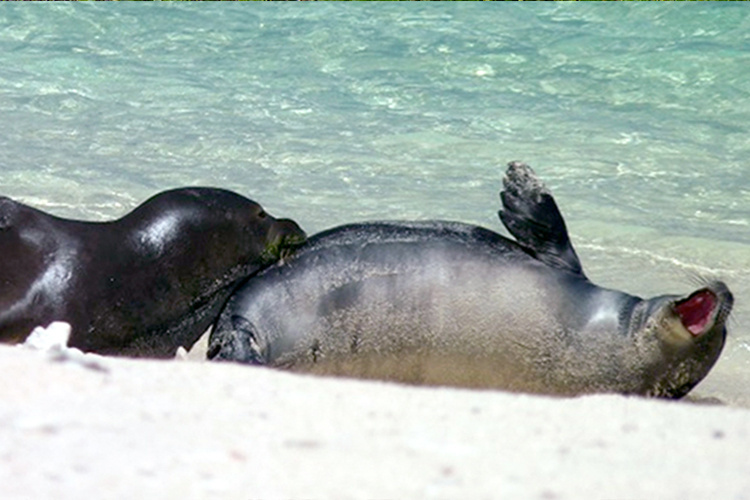 Typically, male monk seals stop paying attention to young seals once they become adults and they mature and outgrow their youthful indiscretions. But there have been a few unusual cases, such as KE18's, where the focus on pups continues into adulthood. At French Frigate Shoals, three individual adult males repeatedly attacked and killed pups; to save the lives of other pups, researchers and conservation managers humanely euthanized one male in 1991 and relocated two males to Johnston Atoll (where there are no young seals) in 1998.

KE18 may not have intended to hurt the young animals, but his bites and scratches often caused infections to develop, killing some of his victims. In 2010, KE18 aggressively attacked a weaned pup, but fortunately the field team swiftly intervened. However, in 2011, KE18’s behavior was more frequent and aggressive. KE18 attacked 9 seals before the team could intervene. Three of those pups sustained severe injuries, and two of them died as a result. KE18 was also seen in 2011 at Midway, where he may have continued his aggressive behavior.

Because of the threat to young seals' survival, the Kure monk seal field team diverted their efforts from population tracking to monitor KE18's activities. They preemptively intervened and interrupted seven of KE18's aggressive attacks against young seals by making loud noises, approaching him, and throwing sand at him. They also moved weaned pups away from areas where KE18 frequented. It was challenging and labor-intensive work to prevent KE18's bullying!

Unfortunately, the field team couldn’t monitor KE18 at all times and had to return to Honolulu once the field season ended. Something needed to be done to protect the young seals, but what? Permanent captivity wasn't an option because, at that time, no facility had the proper permits or capacity to take in KE18. The remaining option was humane lethal removal — an extremely difficult and undesired resolution considering that NOAA’s focus is to save seals, but one that was deemed necessary for the continued survival of the highly-endangered species.

With a somber heart, a team went to Kure at the end of the summer 2011 field season to find and euthanize KE18. But during the 7-day effort, KE18 was never found in a location where the procedure could be safely accomplished, so the team headed back to Honolulu. 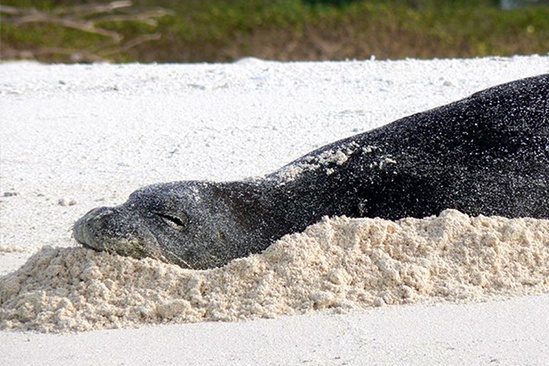 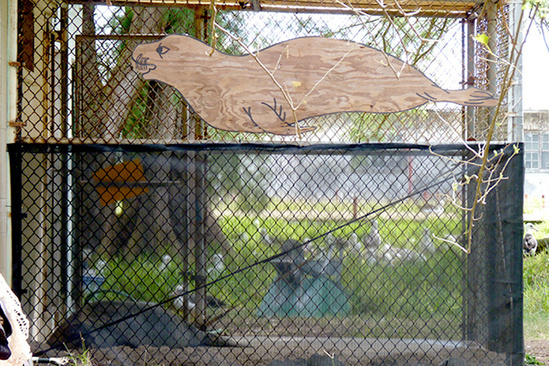 The inability to euthanize KE18 turned out to be a lucky break for everyone involved. Soon after, an appropriate home turned up, a place where KE18 could live peacefully without harming other seals. In January 2012, a field team captured KE18 at Midway Atoll, kicking off a new chapter in his life. The U.S. Coast Guard flew him back to Honolulu and he was temporarily kept in a holding pool at the Waikīkī Aquarium.

KE18 quickly adapted to captivity and adopted a very calm demeanor, opposite his behavior in the wild. Two months later, Hawaiian cultural practitioners bestowed a blessing before KE18 left the islands, giving him his new and more fitting Hawaiian name, Kaimalino, which means "calm as the sea." Kaimalino boarded his second U.S. Coast Guard flight, which transported him to his new home at the University of California, Santa Cruz’s Long Marine Lab. 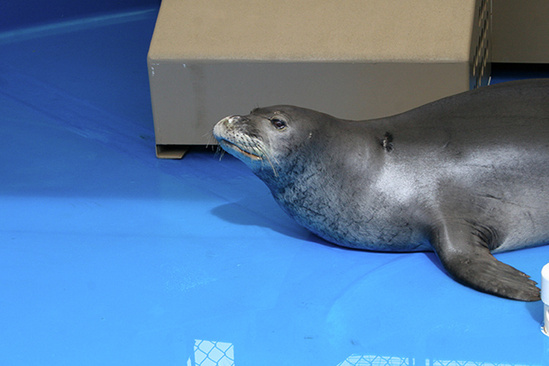 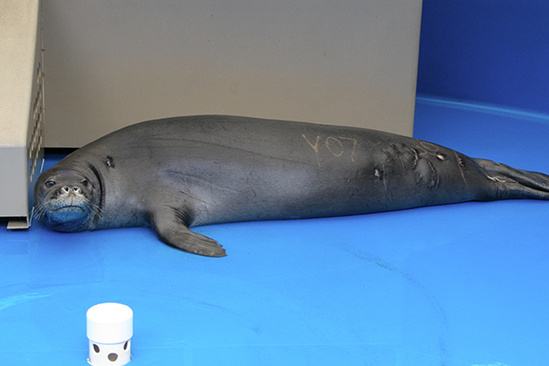 KE18 in temporary holding at the Waikīkī Aquarium.

For the last 5 years, Kaimalino has been "attending the University" and participating in physiology research, helping scientists learn more about Hawaiian monk seals. He is the second Hawaiian monk seal to reside at Long Marine Lab, following KP2 or Hō‘ailona, who now resides at the Waikīkī Aquarium. When Kaimalino finishes up his studies in California, he will ultimately come back home to the Hawaiian Islands.

We all look forward to his homecoming!