NWFSC scientists Eric Ward and Elizabeth Holmes, along with Ken Balcomb of the Center for Whale Research, have found a correlation between the abundance of Chinook salmon and the fecundity (reproductive success) of killer whales. 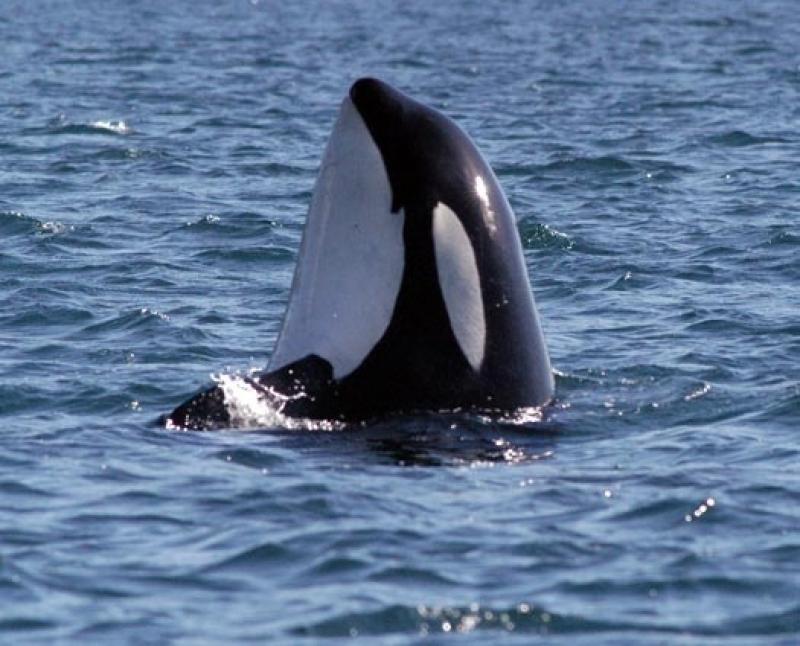 In a paper published in the June 2009 edition of the Journal of Applied Ecology, NWFSC scientists Eric Ward and Elizabeth Holmes, along with Ken Balcomb of the Center for Whale Research, have found a correlation between the abundance of Chinook salmon and the fecundity (reproductive success) of killer whales.

The disappearance of seven Southern Resident killer whales (SRKW) last year marked a setback for the population that appeared to be slowly recovering after a 20% drop between 1996 and 2001. No definitive factor has yet been found to explain the recent decline, but this new study provides additional evidence that the fortunes of the whales may be closely linked to the abundance of Chinook salmon.

According to this study, the probability of a female producing a calf is lower in years of reduced Chinook salmon abundance. Most female killer whales reach reproductive maturity around age ten and calve an average of once every 5.3 years over their reproductive lifespan, which typically peaks around ages 20-22 and steadily declines over the next 25 years. The authors speculate that in years of low prey density the whales may travel larger distances to find food, and the increased search time and reduced social interaction adversely affect reproduction.

Killer whales have no natural predators and typically high survival rates, so last year’s high mortality rate remains a cause for concern. Although declining Chinook salmon numbers may be a primary culprit, it is likely a variety of environmental factors are contributing to the killer whales’ decline.

Puget Sound boat traffic may be adversely affecting the killer whales’ use of sound to communicate and find food. In a study published late last year, Center scientists Marla Holt, Dawn Noren, and Candice Emmons, along with Val Veirs (Colorado College) and Scott Veirs (Beam Reach), discovered that as the background noise of boats increases, the orcas increase their call amplitude to compensate. This may reduce the range over which whales can communicate, limiting their ability to disperse and find food.

An in-press study headed by Dr. Noren has also found that whales respond to close approaches by boats with more frequent spyhops, tail slaps, and other surfacing behavior. These responses could potentially increase the whales’ energy expenditure and need for food.

Most Southern Resident killer whales contain levels of persistent organic pollutants (POPs) high enough to potentially cause adverse health effects, with young whales particularly at risk. According to an in-press study headed by Center scientist Peggy Krahn, ”[b]lubber biopsy samples from Southern Resident juveniles had statistically higher concentrations of certain POPs than were found for adults.” Because mothers transfer contaminants to the calves during rapid development of their biological systems, the young whales are at greater risk of developing immune and endocrine system dysfunction.

Although killer whales are not endangered globally, Southern Resident killer whales were placed on the endangered species list in 2005. The three SRKW pods (groups) are genetically distinct from other killer whales, have their own unique physical and behavioral characteristics, and do not routinely breed with other populations.

Some estimates place the historical population as high as 200 individuals, although by the mid- twentieth century the population had declined significantly. In the 1960s and early 1970s killer whales were regularly captured for placement in water theme parks, reducing the population to around 70 in the mid-1970s. The SRKW population had been increasing until the mid-1990s, peaking at 97 animals.

Ongoing research should provide more insight into the killer whales’ nutritional requirements, the risks posed by pollutants, and how environmental factors may be altering the whales’ social structure. This research can help inform environmental policy and guide conservation efforts.