L41 is Missing. What Does This Mean for the Southern Residents? 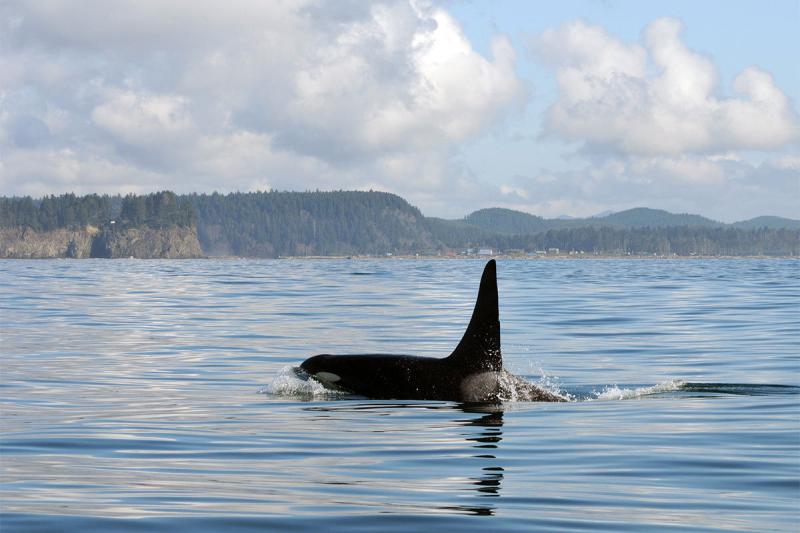 The Center for Whale Research reported in January 2020 that L41, also known as “Mega”, is missing from L-pod. That’s one of three family groups of the endangered Southern Resident Killer Whales. With population numbers for the Southern Residents so low, the loss of any individual from the population is troubling.

L41 was a mega-father with at least 21 known offspring and four grand-offspring. That meant he had a broad genetic influence on the pod. We asked our killer whale researchers at NOAA Fisheries’ Northwest Fisheries Science Center (NWFSC) what losing L41 may mean for the endangered population of 72 whales. We also discuss inbreeding risk for the population.

Mike Ford is the Director of the NWFSC’s Conservation Biology Division. He says it seems likely that some of the other males will be “stepping up” to sire more offspring if L41 is gone. There are eight males in their 20s and 30s currently alive in the population. L41 was born in 1977, and was 43 years old when he went missing. That is considered old for a male Southern Resident. Males die in their early 20s on average. 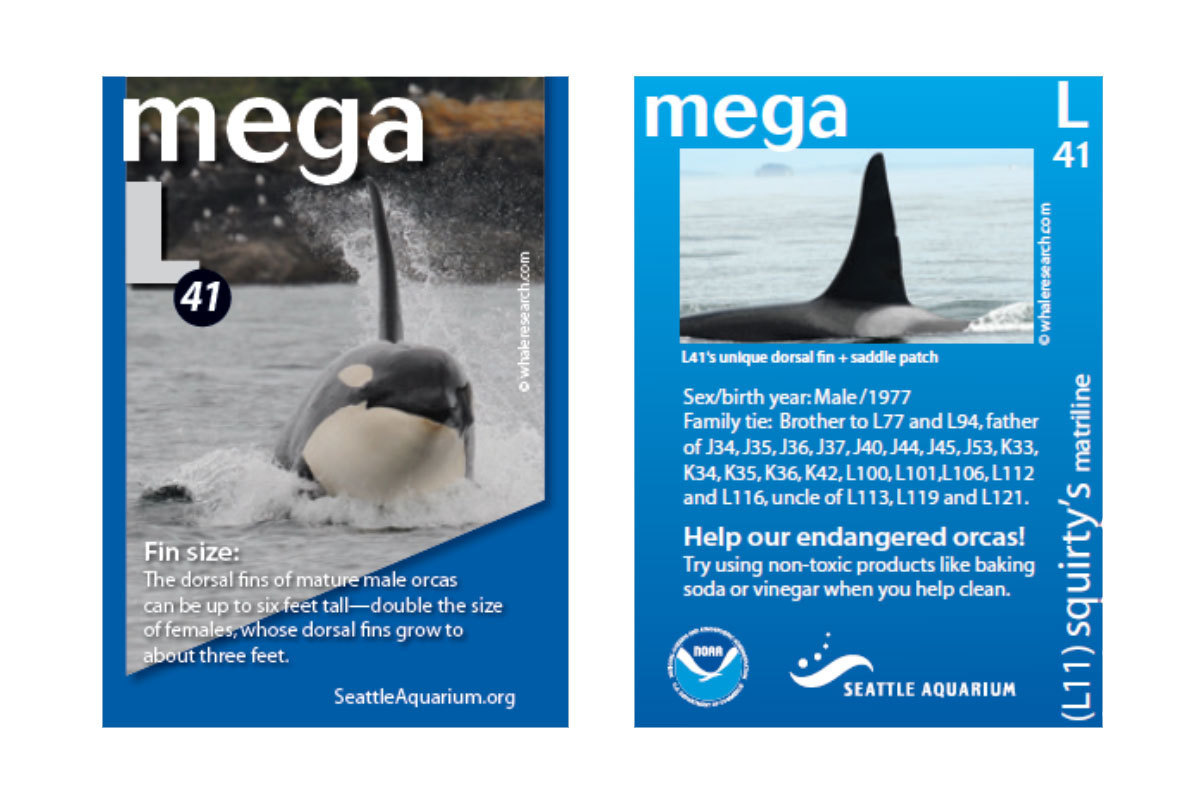 Profile of L41, or “Mega”, from the Orca Trading Card Pack developed by the Seattle Aquarium.

Through genetic analysis published in 2018, Ford and his colleagues found that two male whales fathered more than half of the calves in the pod born since 1990. That’s the earliest year for which scientists have genetic samples. The large number of paternal siblings in the population is a sign of likely increases in inbreeding in the future. The two males were J1 and L41. J1 died in 2010 at an estimated age of 59, leaving L41 the oldest male in the population. L41 was also the largest individual at almost 24 feet in length. L41’s known offspring were born between 1996 and 2015. Ford reports that additional L41 offspring were also probably born since 2015, the year of the researchers’ last biopsy samples.

Brad Hanson, a wildlife biologist with the Northwest Fisheries Science Center, says we are still learning about the breeding structure of the Southern Resident population. “We do know that something must be driving the sexual dimorphism of the species”—that means the males are larger than the females. Two potential drivers are male-male competition and female choice. Hanson suspects female selection of breeding partners is driving the sexual dimorphism because the largest and oldest males have been doing most of the breeding.

“We have seen some other males showing up as fathers,” says Hanson. He wonders whether one or more of the currently sexually-mature males will now become dominant in breeding. 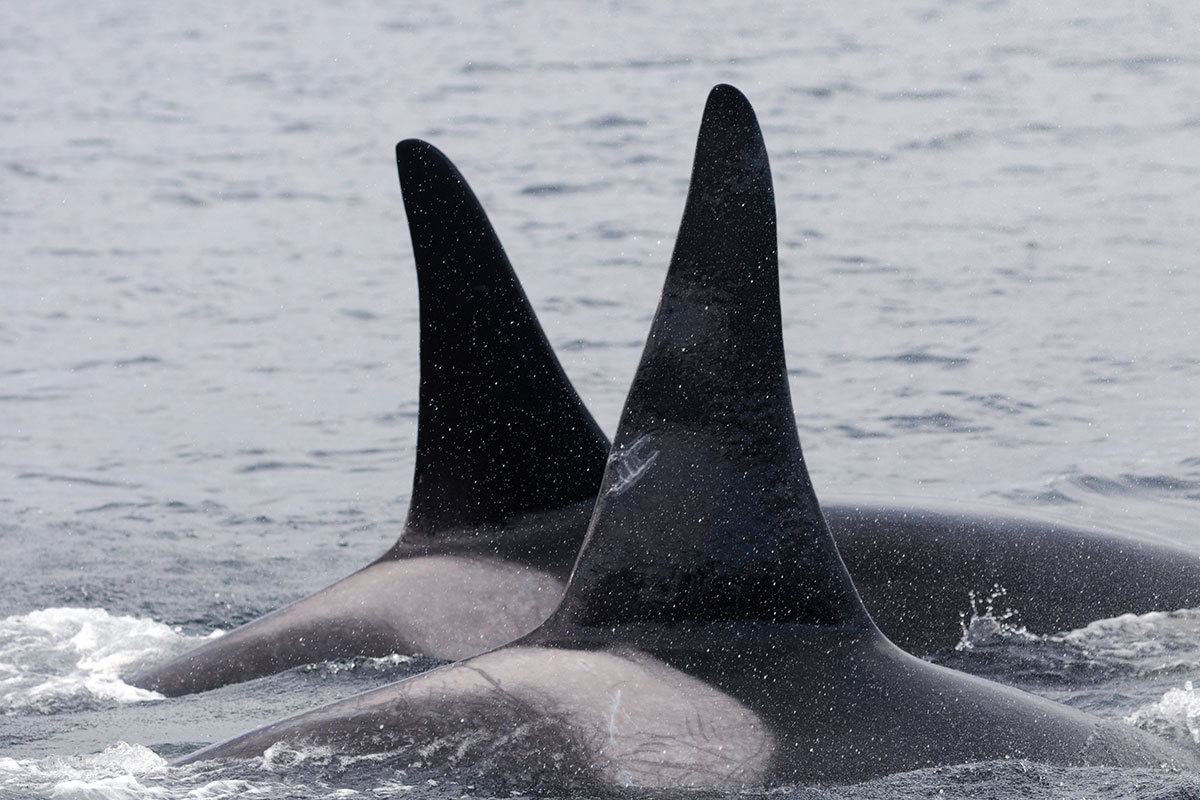 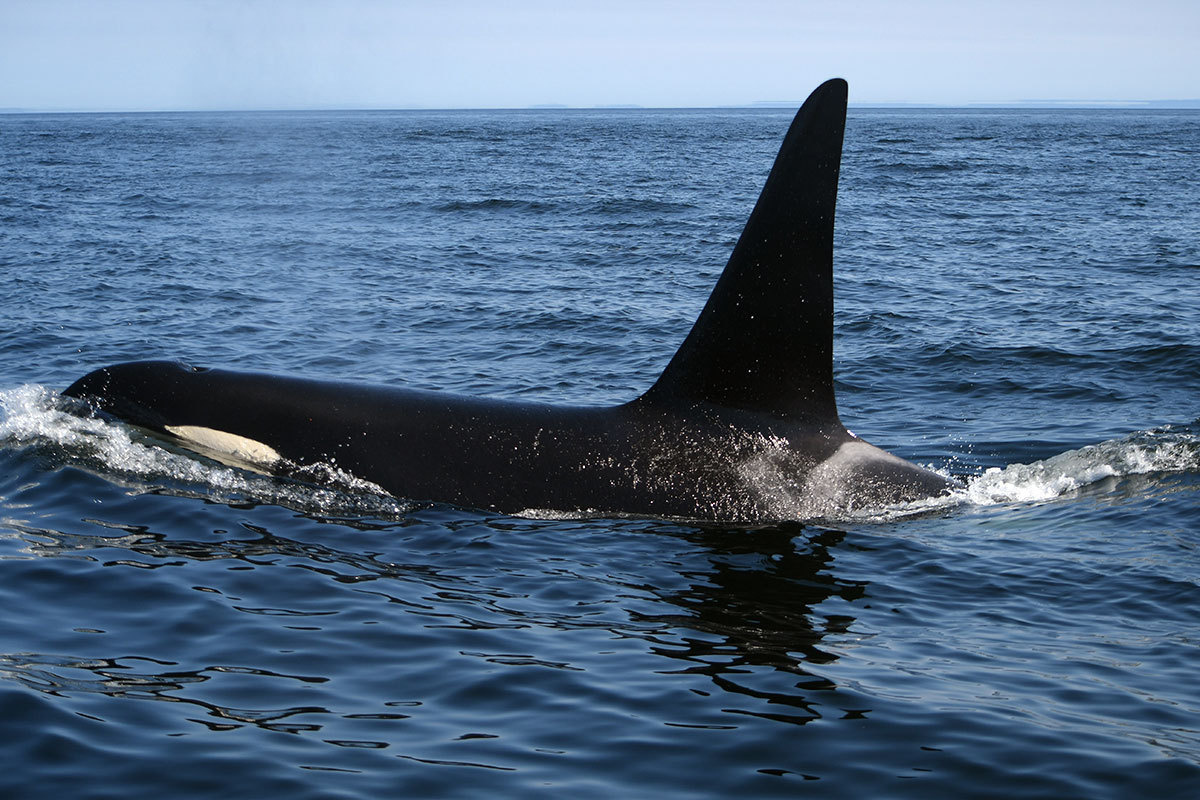 “Losing any individual from such a well-known population is sad because we follow these animals as individuals, each with their own history,” says Kim Parsons, a research geneticist with the Northwest Fisheries Science Center. “Losing L41 is all the more difficult because he was obviously such a prime sire based on the number of calves he fathered.”

“But the fact that we’re seeing other males start to sire calves is encouraging. Some of these males could be the future chosen ones!” The more diversity in fathers, the better, says Parsons, in terms of inbreeding risks.

In their previous research, Ford, Parsons, and colleagues found that four of the whales are already highly inbred. That includes offspring of a father-daughter and mother-son pair. All four are still alive. Many additional whales may be inbred to a lesser degree.

More than half of Southern Resident calves die before or shortly after birth, according to some studies. The genetic analysis from 2018 suggested that inbreeding could be a factor.

Parsons and her colleagues at the Northwest Fisheries Science Center continue to study inbreeding in the Southern Residents. They are examining the whales’ whole genome sequence and investigating mate preference. “There’s obviously mate selection going on for the Southern Residents,” says Parsons, “but what’s driving it?” She is hopeful that further genetic research on these whales will help answer this question.

In the meantime, many mourn the loss of L41. The Center for Whale Research typically considers a whale officially deceased after three sightings of its pod or family group without the individual. While the Center has observed L41’s family group without L41 only once, biologists are not optimistic that they will see him again.

Learn more about the Center for Whale Research, a partner in the study and conservation of killer whales