Researchers study the foraging behavior of the Southern Resident killer whales to inform management of the endangered population. 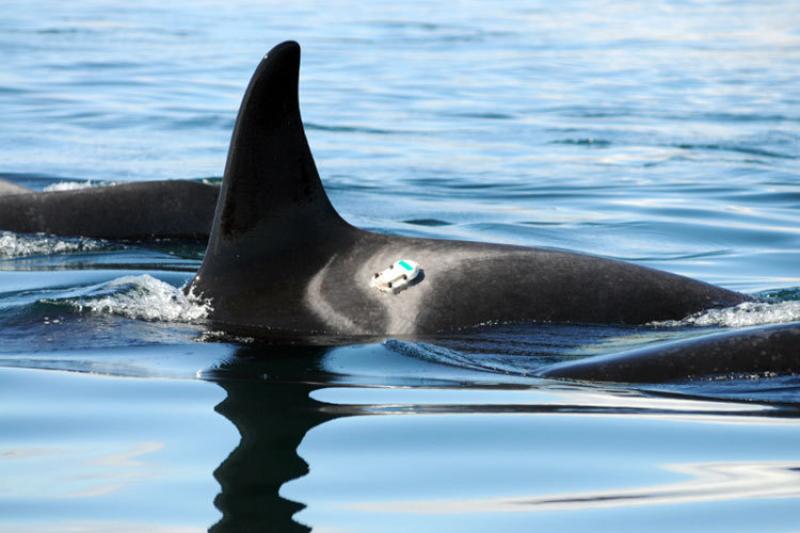 This is the time of year when boats multiply on the inland waters of Washington as more people get outdoors for the summer. It is also the time when many long for a precious chance to see the endangered Southern Resident killer whales.

Boats generate noise, though, which—combined with the boat traffic itself—is considered one of the main threats to the Southern Residents. It can interfere with the whales’ use of echolocation, a form of sonar they use to find the Chinook salmon they favor as prey. Regardless of how many salmon might be available, noise can make it harder for the whales to find them.

That can be particularly costly for the Southern Residents because salmon do not gather in schools as some fish do. The whales must find each one individually—painstakingly hunting one fish at a time. 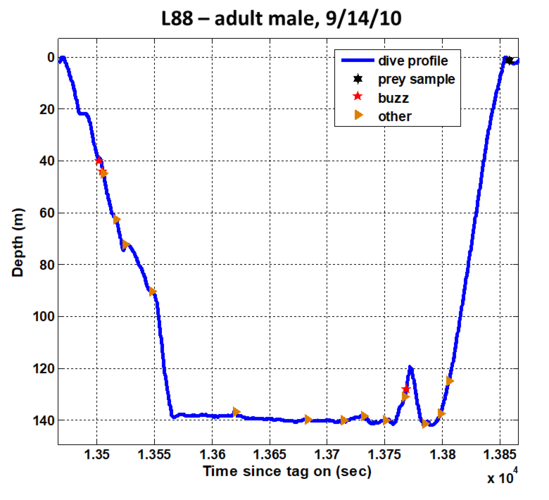 A hunting dive profile of a Southern Resident killer whale, generated from a DTAG.

Research wildlife biologist Marla Holt and her colleagues at the Northwest Fisheries Science Center record the sounds and movements of the Southern Residents using DTAGs. They are learning more about how the whales hunt from this data and more about how noise affects them.

A DTAG is a digital acoustic recording tag, temporarily attached to a whale by suction cup. The suction cup tags do not harm the whales. DTAGs include both hydrophones and motion sensors. Holt and her colleagues have used the DTAG data to create sound/motion behavioral profiles of the whales’ hunting dives. Some dives are short while others last 5 to 7 minutes.

Holt explains what the dive profiles reveal. To hunt for fish, the whales use echolocation, which is the use of sound waves and echoes to locate objects. A whale dives at shallow depths, searching for prey with slow click trains angled below. A click train is a series of clicks that a whale sends out through the water to detect fish. Once a whale detects a desirable fish, it dives down to chase the fish, increasing its click repetition rate while closing in on its prey. Then the whale produces an even faster bout of clicks, called a buzz, right before attempting to consume the fish.

There can be several rounds of buzzing in one dive before the DTAG sensor picks up a crunch of the whale biting a salmon. That’s if the sensor picks up prey handling noises at all for that dive.

Holt’s research on foraging behavior shows that hunting salmon is hard work for the Southern Residents.

Underwater noise from nearby boats, especially in the whales’ summer range in the Salish Sea inland waters, makes it harder. It’s more difficult for the whales to detect the echoes from their hunting clicks, reducing the distance from which they can detect fish.

“If it’s already hard for the whales to meet basic dietary needs, more noise in the ocean and less fish are going to make it even harder,” says Holt.

Salmon habitat restoration is a priority for recovering both Chinook salmon and, in turn, the Southern Residents. Yet it must go hand-in-hand with strategies to address the impacts of noise and boat traffic. Regulations and guidelines in both the United States and Canada, which can be found at Be Whale Wise, are helping to minimize these impacts.

Studies have shown that it’s not so much the size of a boat that determines how much noise it makes, for instance, but rather its speed. So the regulations and guidelines govern both viewing distance and speed of boat traffic.

The big research question right now for Holt is whether male and female whales respond differently to disturbance from nearby boat traffic.

Males appear to spend more time on their own, often in deeper waters than females. Females keep their dependent calves close. Holt wonders if females and their calves could, therefore, be more vulnerable to vessel disturbance than males.

Being able to recognize the sound/motion profiles of different whale behaviors, such as hunting, is helping Holt answer this question. She is comparing the occurrence and transitions between different behaviors to data on boat traffic and noise, for both male and female whales. 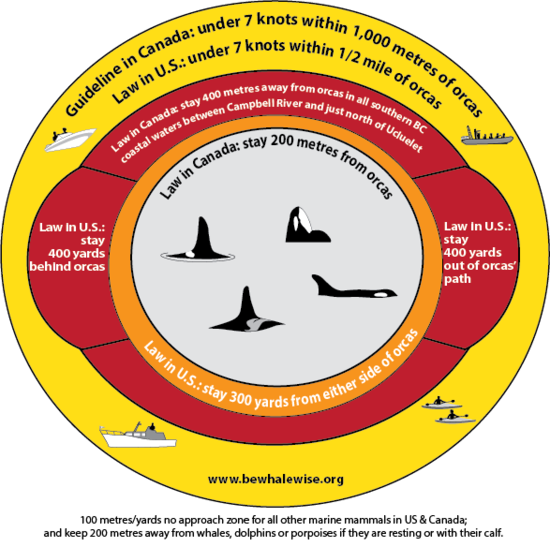 Results from this research could inform how we protect the whales from boat traffic in the future.

You can help the whales forage successfully by following the Be Whale Wise regulations and guidelines for boaters, paddlers, and viewers. View the whales from a distance (at least 3 to 4 football fields when in a boat), and be cautious, courteous, and quiet.

How do the whales tell a Chinook from a coho? Read Part 2 to find out.