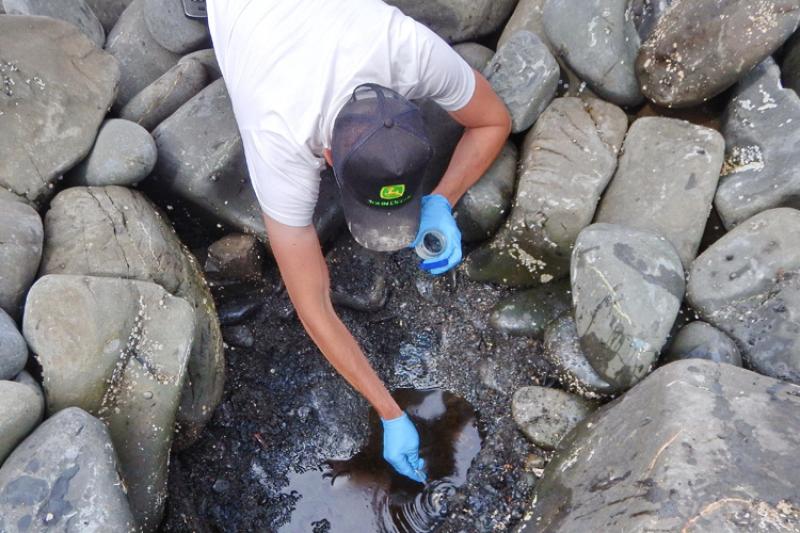 A small portion of the oil from the 1989 Exxon Valdez spill still lingers in patches beneath Prince William Sound, Alaska, beaches. However, this and other studies suggests the remaining oil is sequestered, or buried, and currently is not posing a risk to the coastal and marine ecosystem.

“In the early years after the spill, experts anticipated that the oil would naturally degrade and not persist in the environment. After repeated visits to specific sites over the last 15 years, I haven’t found this to be the case. For these sites, the oil may be in the environment for a long time,” says study leader Mandy Lindeberg, a NOAA Fisheries scientist.

Few spills in the marine environment have presented the opportunity to measure persistence and loss rates over such a duration. Findings from this study provide resource managers with important insights for recovery and protection efforts after major oil spills.

The Story of a Spill 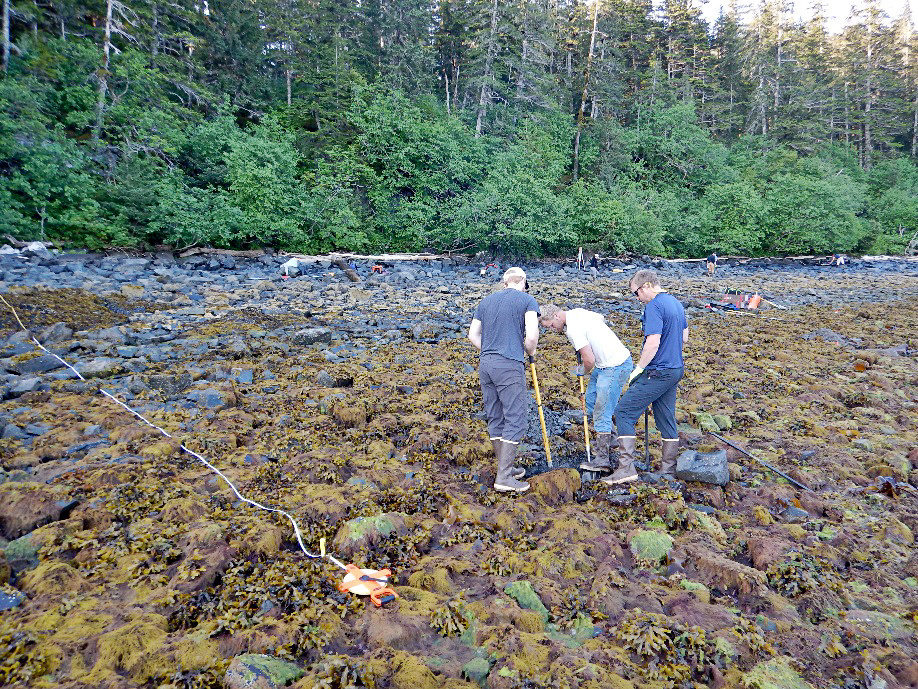 On March 24, 1989, the Exxon Valdez ran aground in Prince William Sound, Alaska, discharging at least 10.8 million gallons of crude oil in one of the largest spills in U.S. history. During the following three years, Exxon employed 10,000 people in an unprecedented clean-up effort. When visible oil was no longer apparent, experts predicted that any remaining oil would weather and dissipate in a short time.

Surveys conducted in 2001 estimated that about 55,000 kg (60.62 tons) of Exxon Valdez oil remained in a patchy distribution for an area approximately 7.8 ha (19.3 acres) below beach surfaces in Prince William Sound. Other research found that animals feeding in areas with lingering oil showed symptoms of chronic oil exposure.

In 2015, more than two decades after the spill, Lindeberg’s team returned to assess sites with persistent subsurface oil. They found the oil’s chemical composition unchanged. Furthermore, the amount and location of oil on each beach had not changed significantly. Information from the 2015 survey was used to update a model that estimates how much oil persists in Prince William Sound. The model now estimates there is 0.6% of the original oil remaining in Prince William Sound, slightly more than earlier estimates. A complementary paper details these results in the Deep Sea Research II special issue. However, these findings, when coupled with other studies which have recently shown the recovery of key nearshore species, suggest that the oil is sequestered and not currently bioavailable to wildlife. 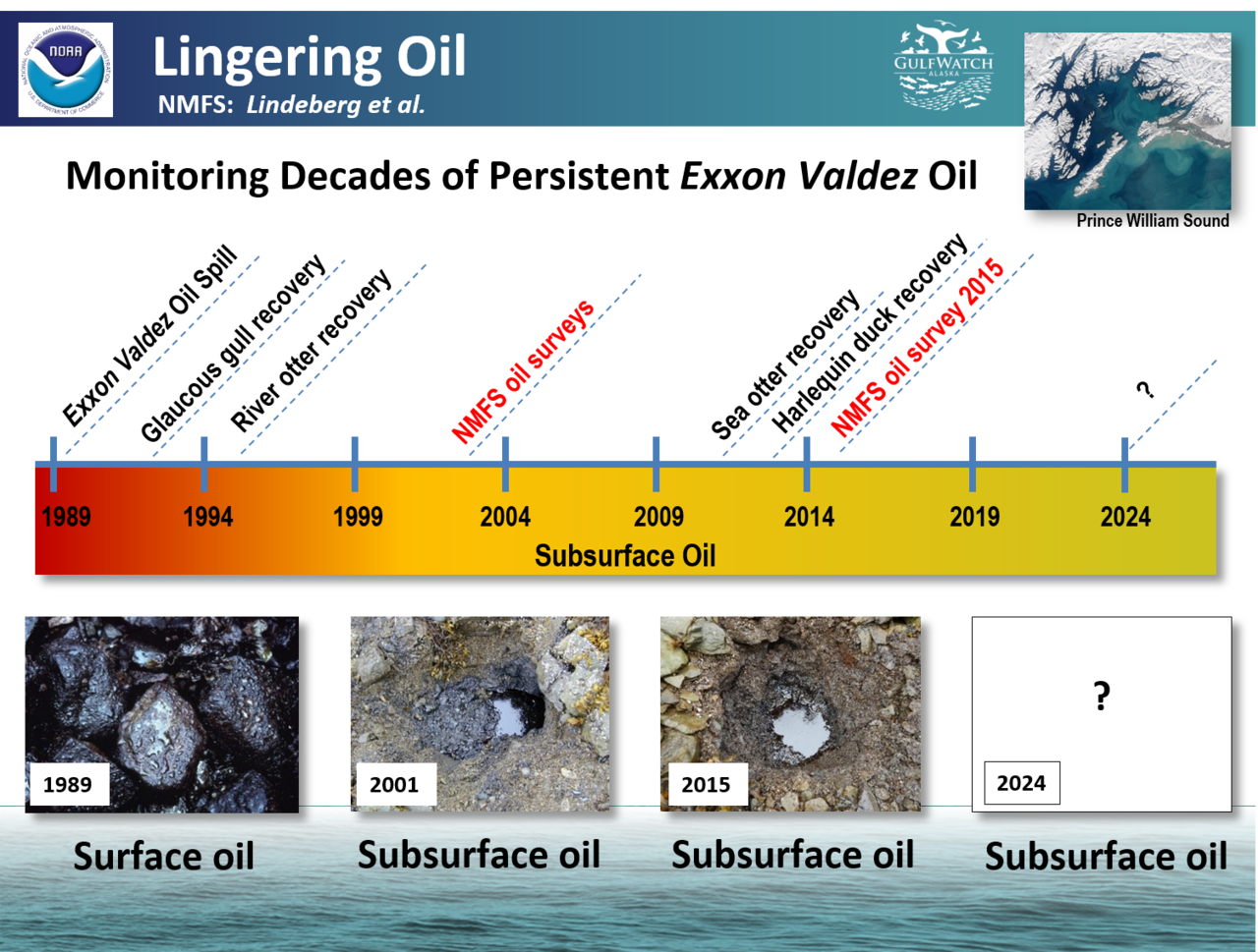 The first decade after the spill cast doubt on those predictions. A 1993 study found that while surface oil had decreased by half since 1991, subsurface oil remained entrenched and resisted weathering. Experimental beach cleaning in 1997 found similar conditions.

Why the Oil Persists

How to Move Forward

According to Lindeberg, while there is a risk that a major storm (on the scale of a 100-year storm) could release the remaining oil back into the environment, the best course of action is to let nature handle things however long it takes. Removal of buried oil would likely be more disruptive than beneficial.

After more than 20 years, sea otters and harlequin ducks have made a comeback, further suggesting that lingering oil that is sequestered in patches beneath Prince William Sound beaches is not currently posing a threat to key coastal and marine species.

Knowledge gained from this study reinforces the need for resource managers to plan for long-term monitoring of oil following a spill.

In Prince William Sound, Lindeberg’s team recommends that lingering oil surveys should be conducted at least once every 10 years. “The current rate of change in Prince William Sound suggests it will be decades before we’ll see any substantial difference in the oiled area or oil composition. Hopefully, before my career ends, we will start to see a change in persistent oil.” The Exxon Valdez Oil Spill Trustee Council funds lingering oil monitoring and continues these efforts today.