Long-Running Plankton Survey to Resume in the Gulf of Maine

One of the longest running biological monitoring surveys in the Northwest Atlantic will resume plankton sampling this winter. Plankton are food for endangered North Atlantic right whales and many other marine species. 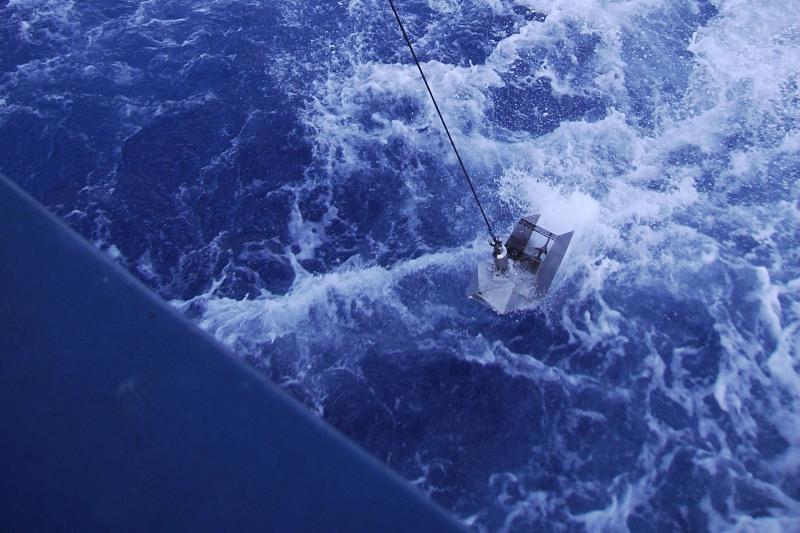 A continuous plankton recorder is lowered behind a commercial vessel for towing along a regular route between ports.

A new agreement between NOAA’s Northeast Fisheries Science Center, the Marine Biological Association in Plymouth, England and the Woods Hole Oceanographic Institution will allow a plankton survey to resume. The survey was originally conducted across the Gulf of Maine from 1961 to 2017.

NOAA Fisheries is providing funding for the survey through the NOAA Cooperative Institute for the North Atlantic Region, hosted by the Woods Hole Oceanographic Institution. The Marine Biological Association manages merchant vessel-based plankton surveys around the world. The association will run and maintain the resumed Gulf of Maine survey through 2024 under this agreement.

“Continuing a long-term time series like the Continuous Plankton Recorder Survey is essential to understanding the impact of climate change to marine ecosystems,” said Chris Melrose, a research oceanographer at the Northeast Fisheries Science Center’s laboratory in Narragansett, Rhode Island and NOAA representative on the agreement.

“Many marine species are shifting their distributions as ocean waters warm," explained Melrose. “Because plankton are an important food source for many species, including the endangered North Atlantic right whale, knowing about changes in the plankton helps us to understand other changes we see in the ecosystem.”

Methods for Sampling, Analysis Same Since 1958

The survey uses a continuous plankton recorder (CPR), a sampling device that is about 1 meter (roughly 3 feet) long. In this survey, it is towed from so-called “ships of opportunity,” such as merchant vessels. These vessels ply the same routes between ports from year to year. Scientists refer to the routes as survey transects. The recorder stays at a depth of about 10 meters (roughly 33 feet). It filters and collects plankton from the water over long distances. The plankton samples are stored on silk mesh in a cartridge inside the instrument and are analyzed later in a laboratory.

Methods of sampling and plankton analysis have not changed since 1958, resulting in an important baseline of data against which change can be measured. Every silk sample collected is stored in a large physical archive, so as new ways to analyze the samples develop, they can be applied to historic samples. Data from the survey are freely available to all.

The CPR was designed by fisheries biologist Sir Alister Hardy in the mid-1920s to sample krill in the Antarctic. He modified his original design for use in the North Sea and began collecting plankton samples there in 1931.

The CPR Survey is the most geographically extensive marine monitoring program in the world, achieving more than 7 million nautical miles of tows this year. CPR transects have been conducted in other parts of the world, with the core monthly plankton sampling program focused on the northwest European shelf and in the Northeast and Northwest Atlantic.

“The value of sampling in an area accumulates each subsequent year, building a dataset of evidence and insight that we can use to understand recent changes in the marine ecosystem of the Gulf of Maine,” said David Johns, head of the CPR Survey at the Marine Biological Association. “We can compare our new dataset with the historical time series, and start to put these changes into context in a warming world.”

In 1961, cooperating commercial vessels began towing CPRs for this survey in the Gulf of Maine during their routine transits between ports. NOAA’s Northeast Fisheries Science Center assisted with those efforts, and in 1974 inherited the route between Boston, Massachusetts and Halifax, Nova Scotia. The center began a second transect, or route, in 1971 across the Mid-Atlantic Bight between New York/NewJersey and Bermuda. These two CPR transects were part of a NOAA Ship of Opportunity Program.

The center discontinued the two transects in 2013, but the CPR Survey in England picked up the routes and continued sampling in the Northwest Atlantic until 2017. Plankton data from the 2014 to 2017 CPR tows in the Gulf of Maine were recently made publicly available through funding from the LenFest Ocean Program.

In 2018 the CPR Survey, conducted by the Sir Alister Hardy Foundation for Ocean Science since 1931, was merged with operations at the Marine Biological Association, also located in Plymouth, England. That year also marked 60 years of continuous monitoring in the North Atlantic.

The resumed Gulf of Maine survey will add to plankton samples collected on two other CPR Survey routes in the Northwest Atlantic. The first route runs across the Scotian Shelf off Nova Scotia to Cape May, New Jersey. The second, runs across the North Atlantic from Iceland to Newfoundland.

The CPR tows complement other regional oceanographic sampling efforts, which can be more intensive but less frequent. These include the center’s ecosystem monitoring program, based at the Narragansett Laboratory, in the Northwest Atlantic. That program collects oceanographic samples numerous times during the year along the Northeast U.S. Continental Shelf from Cape Hatteras, North Carolina to Nova Scotia.

“The Gulf of Maine is changing quickly and the CPR is our best tool for seeing the impact on the base of the food web,” said Andy Pershing, chief scientific officer at the Gulf of Maine Research Institute. “This view is essential for understanding how climate change will impact commercial species like cod, herring and haddock, and protected species like right whales."