Researchers from the Northeast Fisheries Science Center have been collecting plankton and hydrographic data in waters off the Northeast U.S. coast six times a year since the early 1970s. 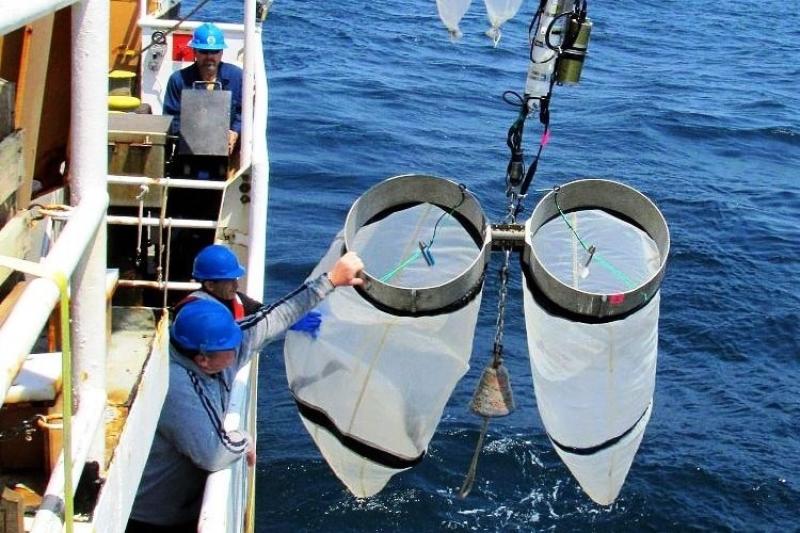 Researchers from the Northeast Fisheries Science Center have been collecting plankton and hydrographic data in waters off the Northeast U.S. coast six times a year since the early 1970s. The Ecosystem Monitoring (EcoMon) program, begun in 1992, is the longest continuous program at the Center. Two EcoMon surveys are conducted jointly with the Center’s bottom trawl surveys in spring and autumn on the NOAA Ship Henry B. Bigelow. The other four surveys in winter, late spring, late summer and late autumn are dedicated to plankton and hydrographic data collection.

Long-term shelf-wide surveys provide data with many applications. Larval fish and eggs from the surveys can be used to calculate estimates of spawning stock biomass and overall fish biodiversity. In addition, analyses of data from surveys provide valuable information on the timing and location of spawning, and may provide an early signal of changes in environmental or habitat needs. Pelagic fish eggs and larvae are often easier to catch than juveniles and adults. Zooplankton collections allow managers to estimate the amount for food available for predators like marine mammals, fish, and seabirds.

EcoMon surveys are conducted at 120 randomly selected stations and 35 fixed stations throughout the continental shelf and slope of the northeastern U.S., from Cape Hatteras, N.C., to Cape Sable, Nova Scotia, and cover all of Georges Bank and the Gulf of Maine. The entire shelf from Cape Hatteras to Cape Sable is known as the Northeast U.S. Continental Shelf Large Marine Ecosystem. The ecosystem is divided into four regions – Mid-Atlantic Bight, Southern New England, Georges Bank, and the Gulf of Maine.

Thirty randomly selected plankton stations are targeted for sampling in each of the four regions on each survey. Thirty-five fixed hydrographic stations were added to the surveys in 2012 to collect additional water temperature and salinity data. Fixed stations are arranged to help oceanographers examine water properties like temperature and salinity, which helps describe the ecosystem and water circulation patterns. Stations are arranged across the shelf in the Mid-Atlantic Bight and Southern New England, from near the coast to off the shelf. Stations in the Georges Bank and Gulf of Maine regions are located along the coast, on the bank, in the deep basins, and in the major channels to record water masses entering and exiting the Gulf.

The surveys routinely collect tiny plant and animal plankton and fish larvae and eggs throughout the water column to a maximum depth of 200 meters (about 650 feet) using long, funnel-shaped nets with very fine mesh known as bongo nets. Water temperature and salinity data from the surface to the instrument depth are collected simultaneously with plankton tows using another instrument called a Conductivity, Temperature and Depth (CTD) unit. Other measurements of surface and near-surface conditions are captured with shipboard sensors while the research vessel is both on station and underway. Water samples are collected to measure properties such as nutrient and chlorophyll content.

“That way the water column data are correlated with the plankton tows so we know the conditions where the plankton and fish larvae and eggs were captured,” said Jerry Prezioso, an oceanographer at the NEFSC’s Narragansett Laboratory in Rhode Island. Prezioso often serves as chief scientist, and notes that while some things have remained the same, much has changed over the past four decades. He has firsthand knowledge, since he has been with the program since its inception. It began in the mid-1970s under the International Commission for the Northwest Atlantic Fisheries and later NOAA’s Marine Resources Monitoring, Assessment, and Prediction program.

“The technology we use is the biggest change I have seen,” Prezioso said, “but the kind of information we collect about the ecosystem has really not changed, other than the addition in more recent years of information on fish larvae and eggs. When I started going to sea we used mechanical instruments, but today the equipment is almost all digital. We can collect so much more data now, and it is easier to do than it used to be.”

Much of the scientific data is logged directly into the shipboard computer system, which also includes navigation and ship operations information so all data can be correlated with the specific location where it was gathered.

“Another big change we have seen over the years has been the shift of fish and plankton species from southern to northern waters,” Prezioso said. “Harvey Walsh, a fishery biologist with the Oceans and Climate Branch at the NEFSC, has noted a northward shift in almost half the 45 larval fish species we have examined, including an increase of black sea bass larvae on Georges Bank. Zooplankton communities have changed too. Some taxa like Pseudocalanus spp., which are important prey species, are also shifting northward.”

Data generated by these surveys are analyzed by scientists to examine changes in the ecosystem. For example, the most recent assessment of Atlantic mackerel used a joint Canada/United States index of spawning stock biomass based on egg collections, which included spring EcoMon plankton and hydrographic data. Much of the EcoMon data are available to researchers within a few weeks after the survey concludes, while other information, such as identifying and cataloging fish larvae and plankton, takes months to prepare. Zooplankton data have also been used to locate North Atlantic right whale foraging areas to assist management and protection efforts.

In addition to NEFSC staff, there are usually several students and researchers from other organizations aboard each EcoMon survey. Usually two observers, funded by the Bureau of Ocean Energy Management, are aboard to identify and count seabirds, turtles, and marine mammals, including any sightings of North Atlantic right whales. On the late spring survey that ended June 6, a NOAA Teacher at Sea from South Carolina joined a Maine Maritime Academy student and a researcher from NOAA’s National Environmental Satellite, Data and Information Service who was ground-truthing environmental data collected from satellites.

In addition to collecting the samples needed by the NEFSC, Prezioso and colleagues will collect samples and data for researchers who are not able to join the cruise, if time and circumstances permit.

“EcoMon is a good platform for scientific and educational collaboration,” Prezioso said. “For example, we’ve had a decades-long collaboration with Ann Bucklin from the University of Connecticut and Peter Wiebe from Woods Hole Oceanographic Institution (WHOI) on the Census of Marine Zooplankton (CMarZ) Program. We've been collecting zooplankton samples from all across our survey area for them to analyze at a molecular level for genetic diversity for many years.”

Another researcher from WHOI, Heidi Sosik, has found over the past several years that the EcoMon trips provide a convenient way of deploying her ImagingFlowCytoBot, a device for collecting data and images of marine phytoplankton from the four subregions routinely sampled on the surveys: Gulf of Maine, Georges Bank, Southern New England, and the Mid-Atlantic Bight.

“In just the last few years, we’ve had researchers from the University of Rhode Island, University of Massachusetts, University of Maine, University of Connecticut, Texas A&M, State University of New York, Rutgers University, Old Dominion University and WHOI as well as NASA, the Canadian Wildlife Service, and Canada’s Department of Fisheries and Oceans out to sea with us. We try to accommodate their research needs, and we share our data and samples.”